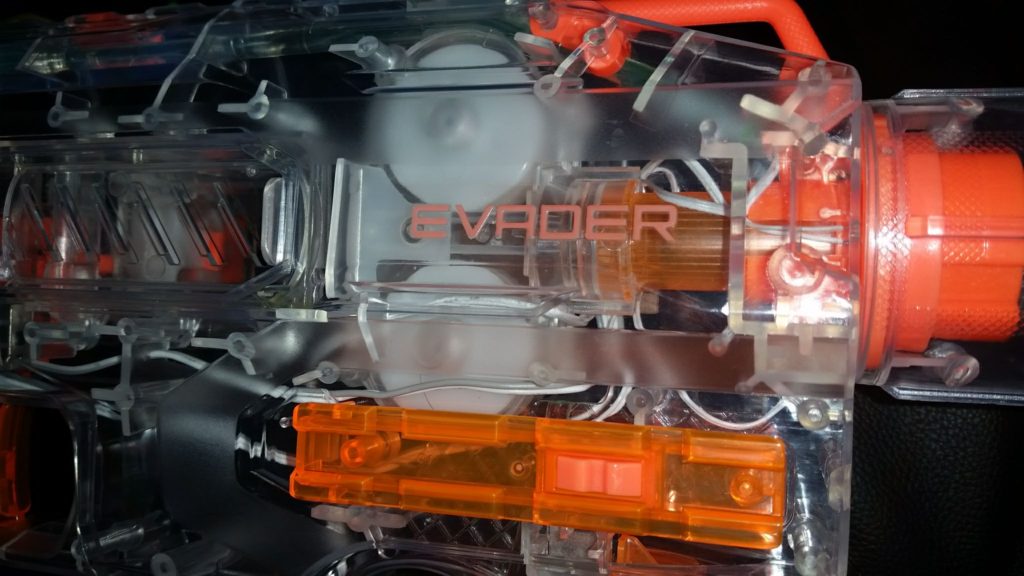 The Evader is unique in the current lineup thanks to the clear plastic and the LEDs on the inside. The light circuits are triggered by, um, a trigger on the front grip. The silencer attachment also glows – two LEDs in the barrel do not turn on unless an attachment is on the blaster. The side magwell, a la Rampage and Mediator, makes for easy reloading, as larger hands can wrap around the clip, depress the retainer, and pull out the magazine.

This is a blaster made mainly with right handed individuals in mind – loading will be more awkward for left-handed users, although you could tilt the blaster over to make the magazine well accessible. It’s just something to think about! 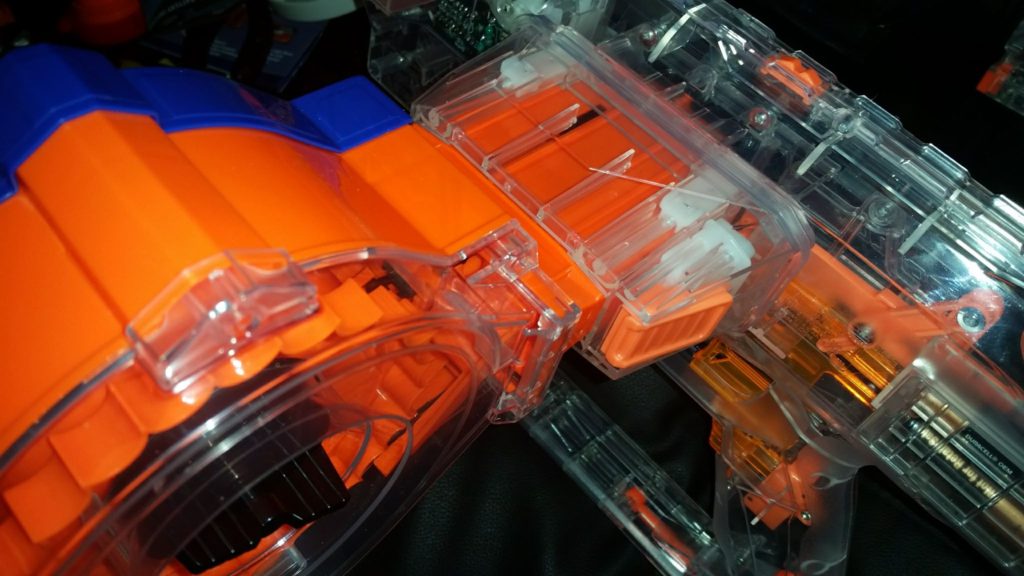 Need a strap? There are three different places for attaching one.

The two grips are rather large for a children’s toy, which makes it more comfortable for adult fans. Three tactical rails sit on the top, bottom, and side of the blaster. The stock attachment point in the back is present. All things considered, it’s a fine shell for most users in terms of comfort, attachment potential, and simply being able to see the guts of a flywheel blaster. 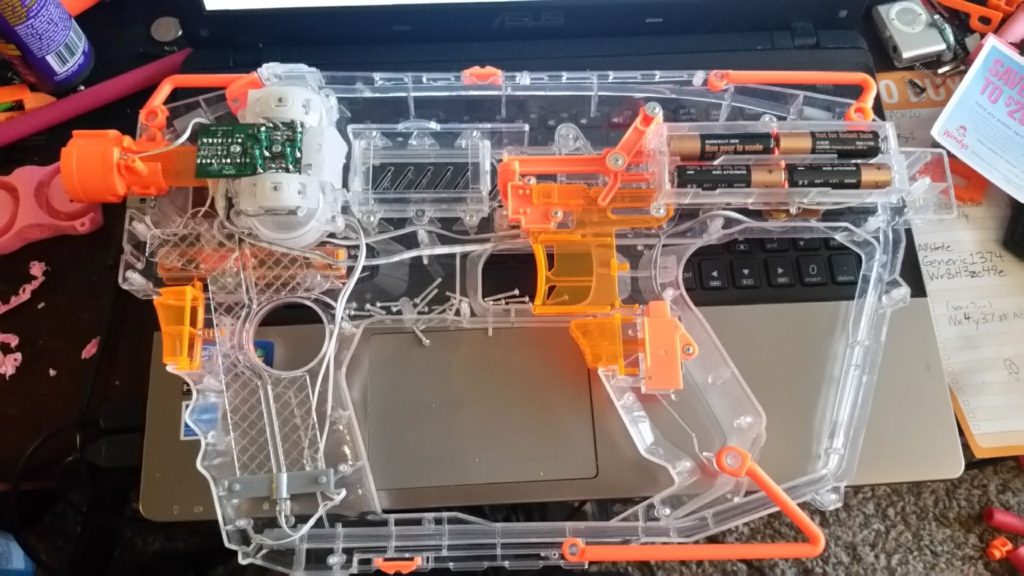 The guts, of course, are exactly what you’d expect. The Rev trigger powers up the flywheel motors, and the firing trigger moves a lever assembly to push a dart into the flywheel cage. (On a related note, the clear, enclosed flywheel cage looks amazing, and would be fun to see in different colors, via dye or resin cast replacement).

There’s no need to actually open up the blaster for normal use. I’m just one of those individuals that enjoys tinkering with their toys.

The Evader arrived with batteries already in the tray (presumably it will ship that way so users can try the glow feature). As the batteries were reading 6.45V (essentially brand new for four alkalines in series), I went ahead and tested the blaster with the included batteries. The included Elite darts hit fairly hard, with speeds averaging 73fps (and every shot from 70-77). There was only a 5fps drop with Accustrike darts. It’s nothing to sneeze at for a stock dart blaster.

The Nerf Modulus Ghost Ops Evader is a fine blaster. It’s a Stryfe with a larger body and comfortable handling, and it comes with a fun gimmick (and as a person who enjoys them, I use that word in the best possible way). The $40 asking price is up there (and with the extra plastic and bits, understandable), but if you want a nice semi-auto blaster, the Evader is up to the task. 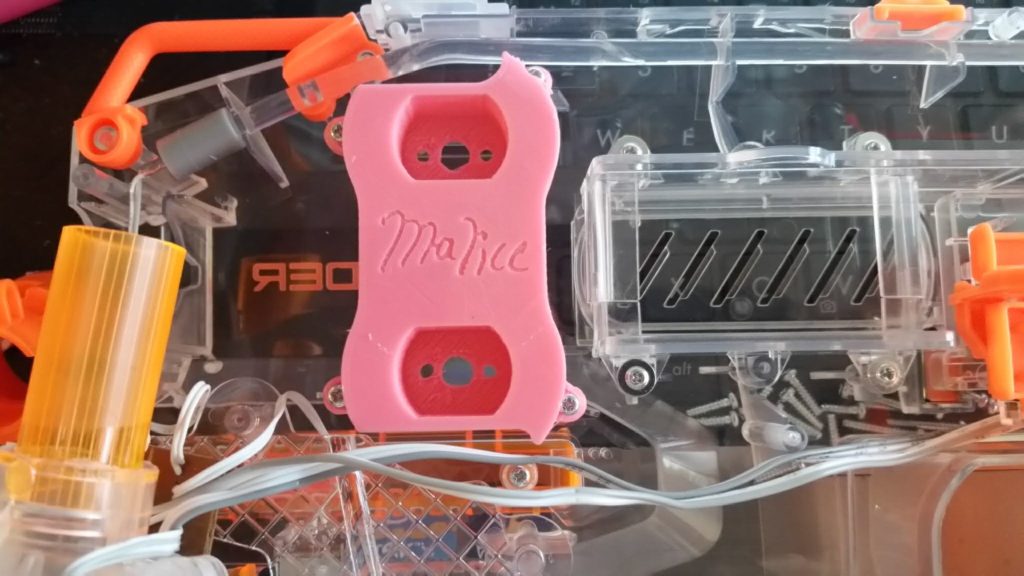 One last note before closing: I did fire up the 3D printer to test something, and there is at least one aftermarket cage that will fit. Now I just need to tighten up my printer’s settings and make another cage + dart guide.

In terms of circuitry, there are seven green LEDs throughout the blaster, and a 520ohm resistor is paired with each one. This is actually overkill in terms of what’s needed, but it means that the LEDs will last longer than if they were running at 100% brightness. If a person were to rewire the blaster for, say, a 7.4V (2s) Lipo battery, the lights should still be okay, albeit with a shorter lifespan. In addition, the LEDs are easily accessible, should you want different colors.

Actually, that would be an interesting idea, having several of these blasters but with different color LEDs. It would make for fun night games!