One of the most interesting blaster developments of the past year has been from Prime Time Toys. Starting with the inexpensive but capable Dart Zone BallistixOps Powerball, PTT has been building a line of blasters compatible with Rival. Now, with the Quantum (available at Walmart), PTT has a competitor for the Nemesis at an affordable price. It’s not without issues, however. 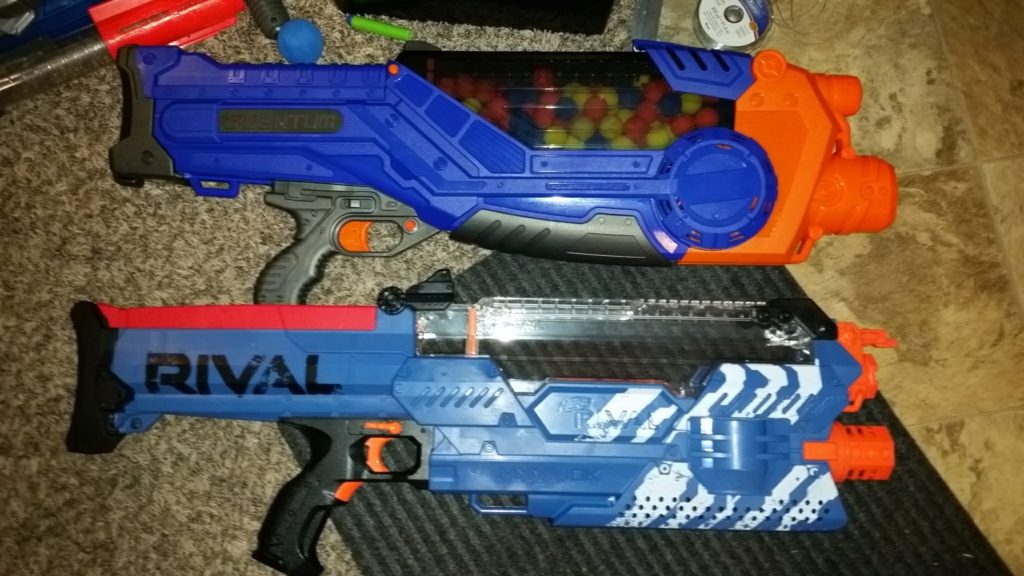 The Quantum maintains the same layout as the Nemesis. A battery tray fits in the stock, a hopper holding up to 100 rounds sits in front, and an agitator and feeding system move balls to the flywheel cage.

However, the Quantum opts for a curvier layout, as opposed to a utilitarian shell. The main body is slightly thinner, and uses a tall, thin hopper to accommodate its ammo. In addition, the grip on the bottom of the Quantum is quite comfortable to use; the blaster feels balanced even with 6 “D” batteries and a full hopper. It will be a matter of personal preference, but I find the Quantum feels better in my hands. 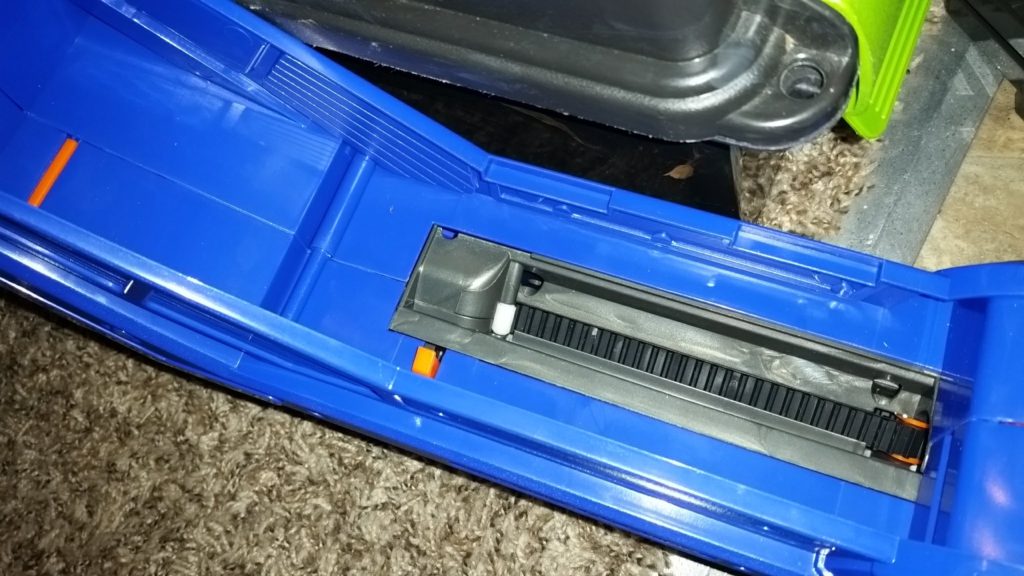 The Quantum uses a different agitation system than the Nemesis. A belt still carries balls to the flywheels, but instead of rotating pieces, we have a flap. Specifically, one flap on the hopper moves up and down; a plastic tab connected to the third motor “vibrates” the flap to bounce the balls around. Think of it as a long pinball flipper that’s constantly hitting the balls above it. It’s not a perfect system, and there are often periods where balls just refuse to drop into the cavity with the belt. It happens with the Nemesis, as well, but it seems a bit worse in this case.

In the end it seems like the flap, while preventing jams, has a tendency to bounce the balls around as much as help them settle in the belt groove. It may be a timing issue that needs addressed, as at most I got three balls per second in rate of fire, compared to five from the Nemesis.

Simple, but with Flaws 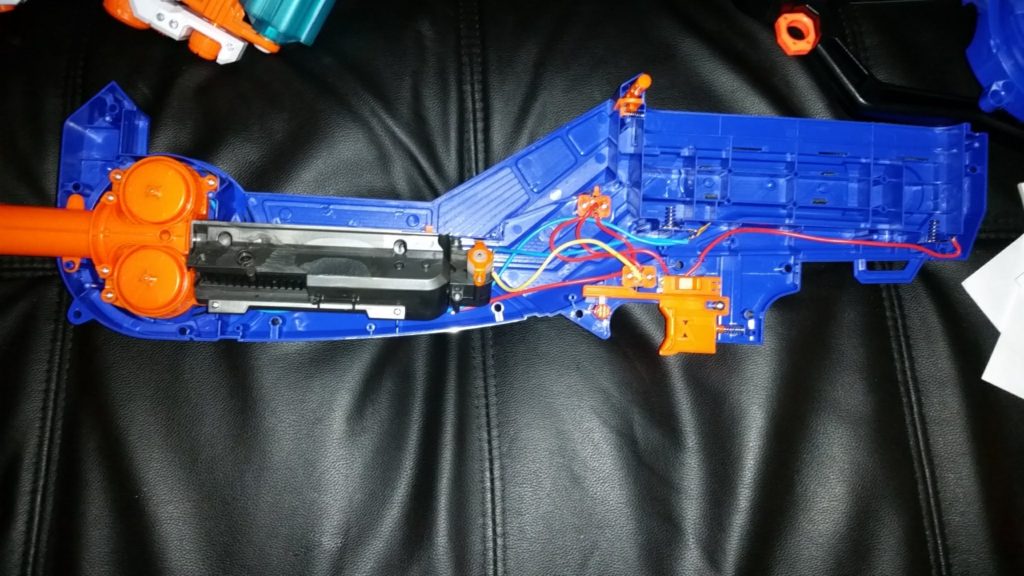 You read that correctly: a master switch, NOT a rev trigger. This will be a huge turn off for lots of people, as you can’t simply power up the blaster by pressing a button with your middle finger. For many game types, that’s a not insignificant delay for the user of the blaster, especially when surprised or in close quarters. I suppose you could leave the flywheels on all day, but that’s just giving away your position well ahead of time. It’s an even sillier design choice when the last Dart Zone/Adventure Force blaster in the line, the Accelerator, had the standard rev trigger. And that trigger is maintained on the Velocity (review coming soon). It’s simply a large step backward in operation. Not that modders can’t add their own, but they shouldn’t have to at this point. It’s a standard. 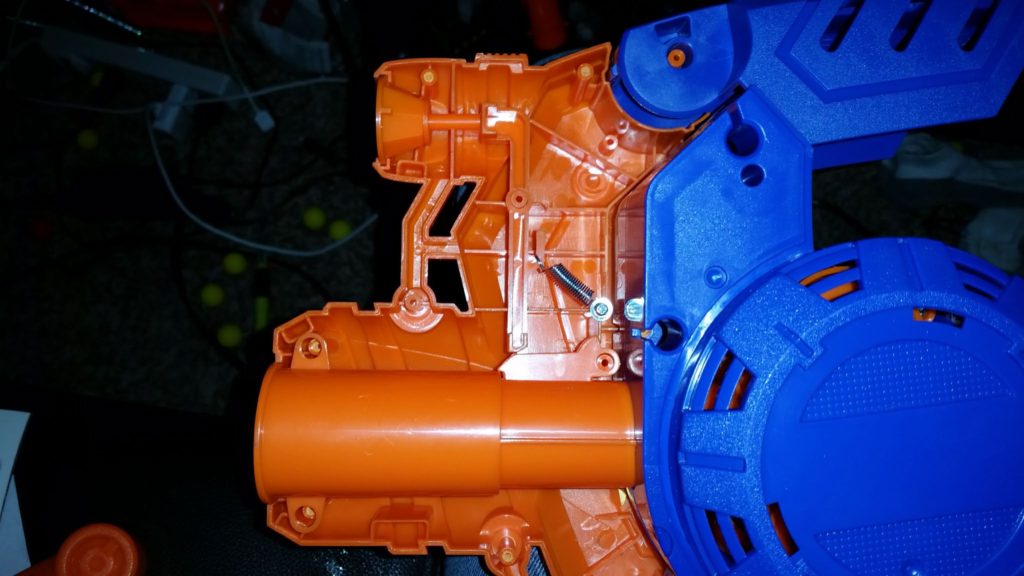 Despite these deficiencies, the Quantum works well for foam combat. Mine averaged 94fps across several hundred shots, with an average of three rounds per second. In addition, the rounds were incredibly accurate

One problem I have not yet encountered (but for which a solution exists) is jammed balls. The Quantum has a fixed plastic ridge used to provide hop-up, and if a ball ever gets stuck behind it, it is difficult to remove. I had this happen twice with the Accelerator. In the Quantum, you can press a button on the front of the blaster. This lets the hop-up tab flip out of the way when you point the blaster down. It’s a nice solution.

The Quantum is a nice entry into the field of ball blasters, but it isn’t without flaws. The lack of a rev trigger is a major downside, and the feeding system is slower than that in the Nemesis. Even so, it fires well, and is available for just $50. Whether the price is enough to overlook the flaws is up to you.