First event in some time, finally got a chance to combat test my Bullpup RS MkII.

Elite Rapidstrike (various setups) – full-auto, mag-fed flywheeler. Excellent in close quarters and against groups of zombies. Can easily waste a lot of ammo if trigger discipline is lacking.

Modulus Mediator (various setups) – pump-action, mag-fed springer. Decent all-rounder with the notable advantage of being very compact while still being pump-action. Not exceptional in any category but performs well with just a spring upgrade. 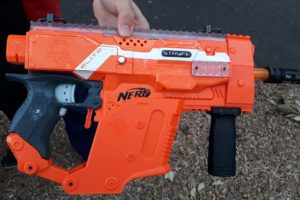 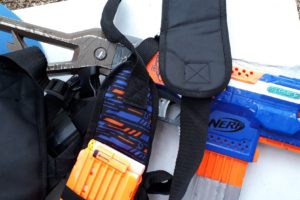 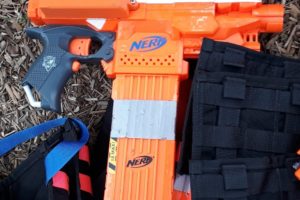 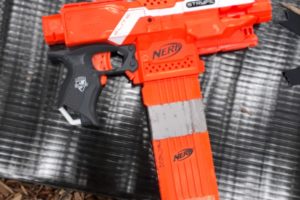 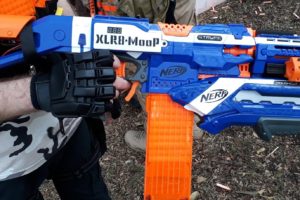 X-Shot Turbo Advance (various spring setups) – pump-action, cylinder-fed springer. Quite good for a no-mag light/scavenger loadout. Unusually high capacity that is easily topped-up, and can be quick-reloaded if spare cylinders are available.

N-Strike/Elite/ZS Longshot (various setups) – bolt- or pump-action, mag-fed springer. High power and good accuracy if built well makes them effective at mid- to long- range engagements. Quite good at picking off zombies from afar and supporting other humans. Slow firing, making it fairly vulnerable in close quarters against groups. 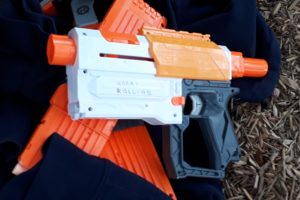 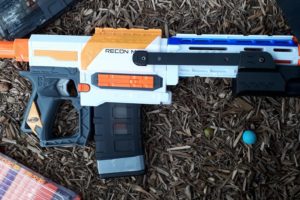 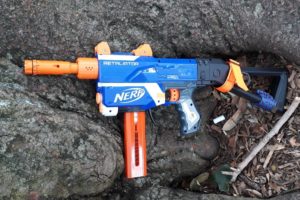 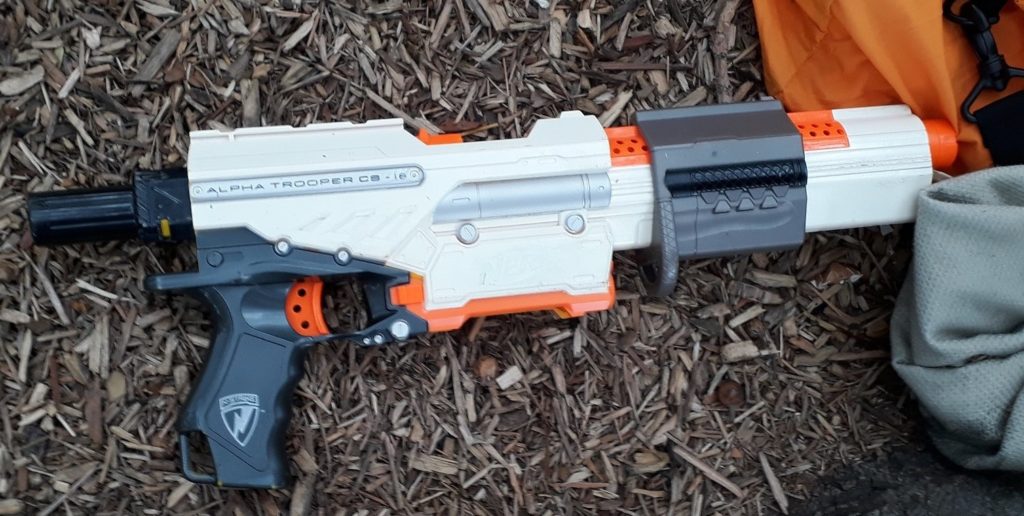 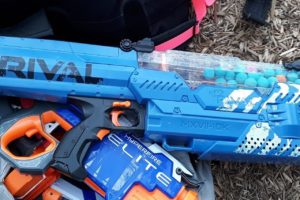 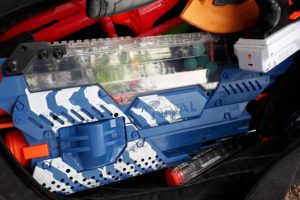 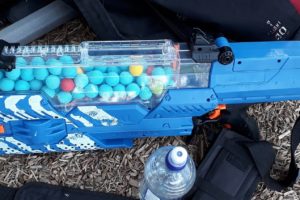 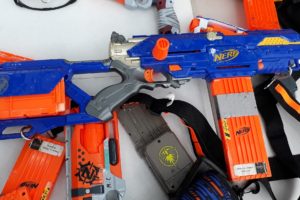 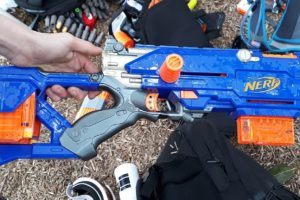 N-Strike Longstrike (unknown mods, if any) – bolt-action, mag-fed springer. Totally outclassed by most modern blasters, due to the use of a highly inefficient reverse plunger system. Fairly slow firing and quite large. 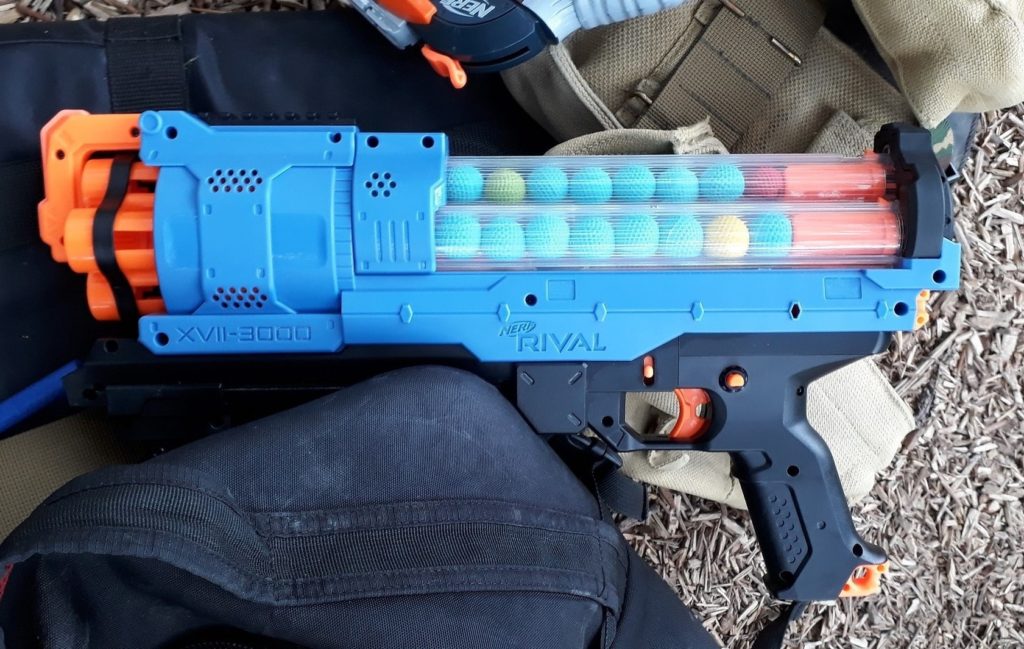 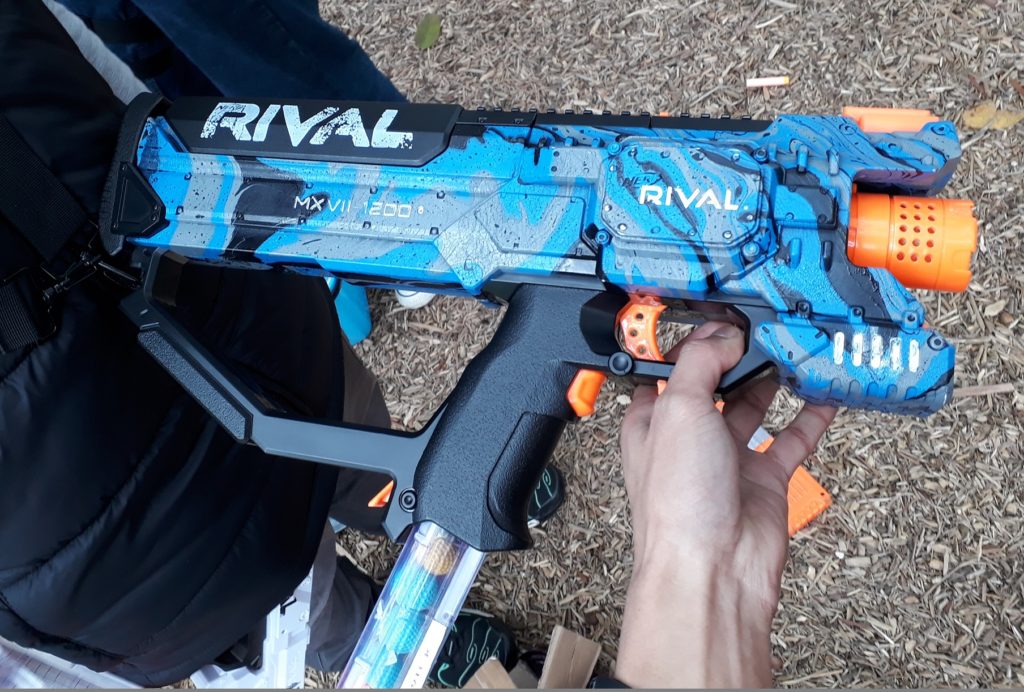 Same play area as always. Turnout was alright, peaking around 25 players or so. A majority of them were newer or inexperienced. Weather was decent, fairly cool peaking at 15C, with some cloud cover but no rain. Wind was quite strong however, which often interfered with combat.

As usual, we started the round with Survival.

From the beginning, I paired up with one other zombie. We stayed towards the north edge of the play area, however were soon targeted by multiple zombies and Tanks. During one of these engagements, my Bullpup RS suffered a pusher failure and was made unusable. I was forced to switch to Sweet Revenges, however was tagged shortly afterwards. 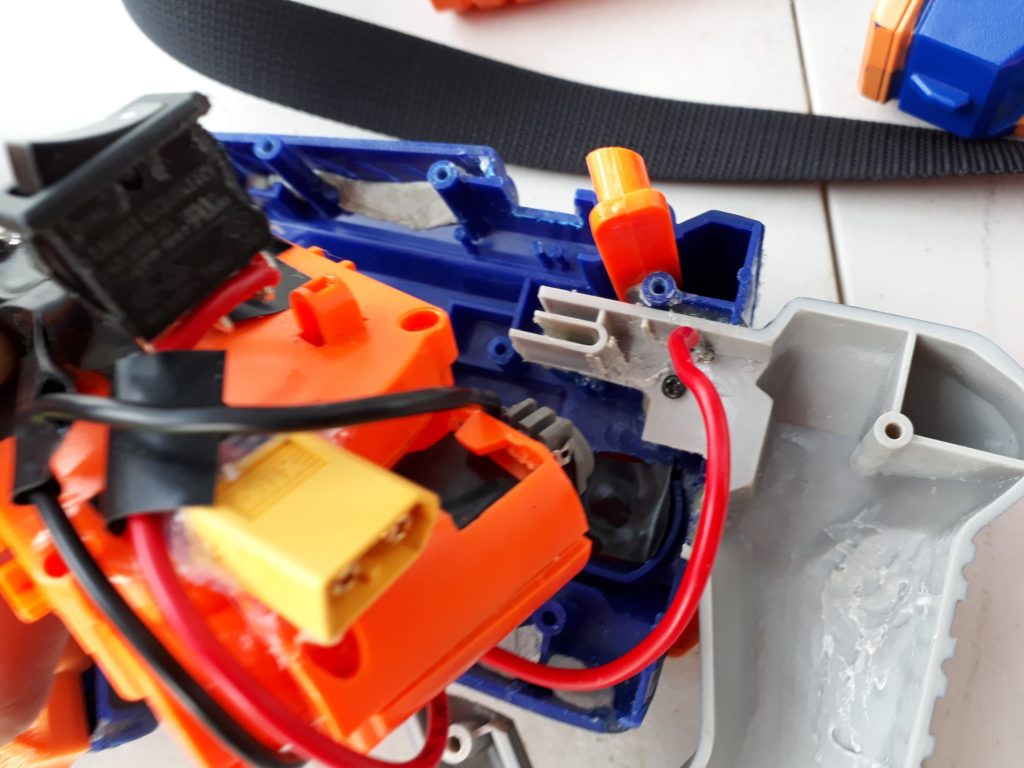 Inspecting the failure of the pusher, I believe I know what happened. The magwell of the BPRSMkII is quite loose, allowing mags to tilt sideways slightly – just enough to potentially allow the pusher to collide directly with one of the feed lips of the mag. I believe that during the engagement, the pusher collided with a feed lip and the trigger was held long enough for the pusher to kick itself out of position. This not only got the worm gear stuck in completely the wrong place, but also broke one of the motor tabs. 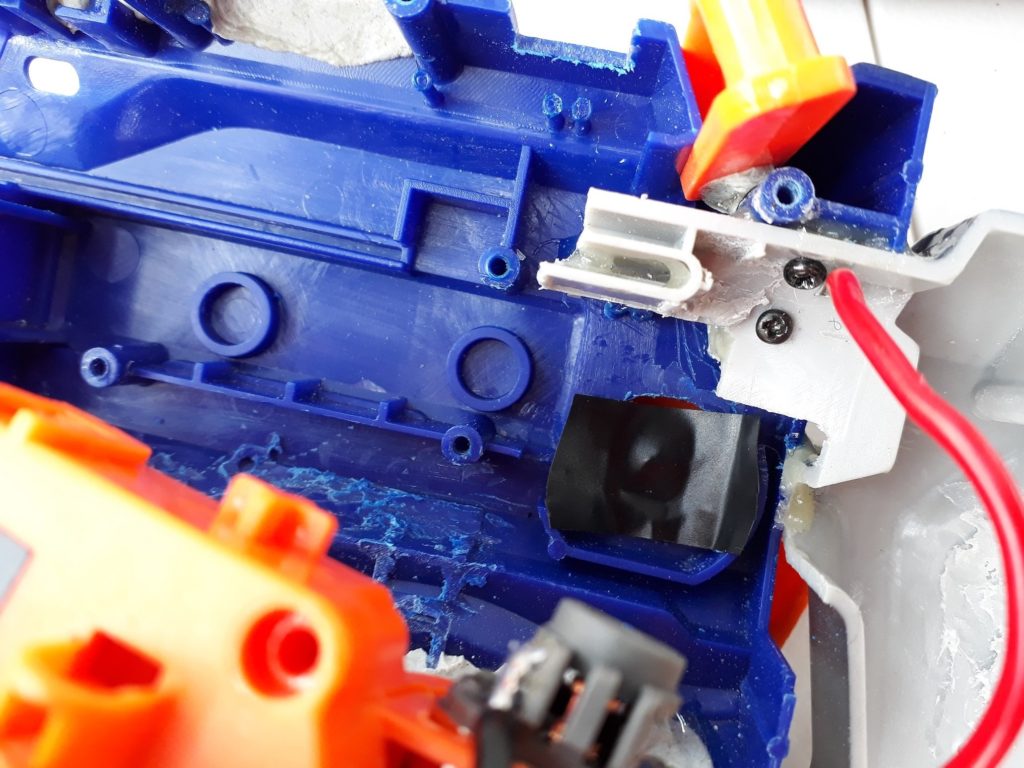 Thankfully, I was able to borrow a battery-operated soldering iron to resolder the wire. I wedged a voberry head inside the pusher cover, to prevent the pusher from kicking itself out again. Once I have more time, I also intend to also add some mag guides in the magwell to prevent mags from tilting. 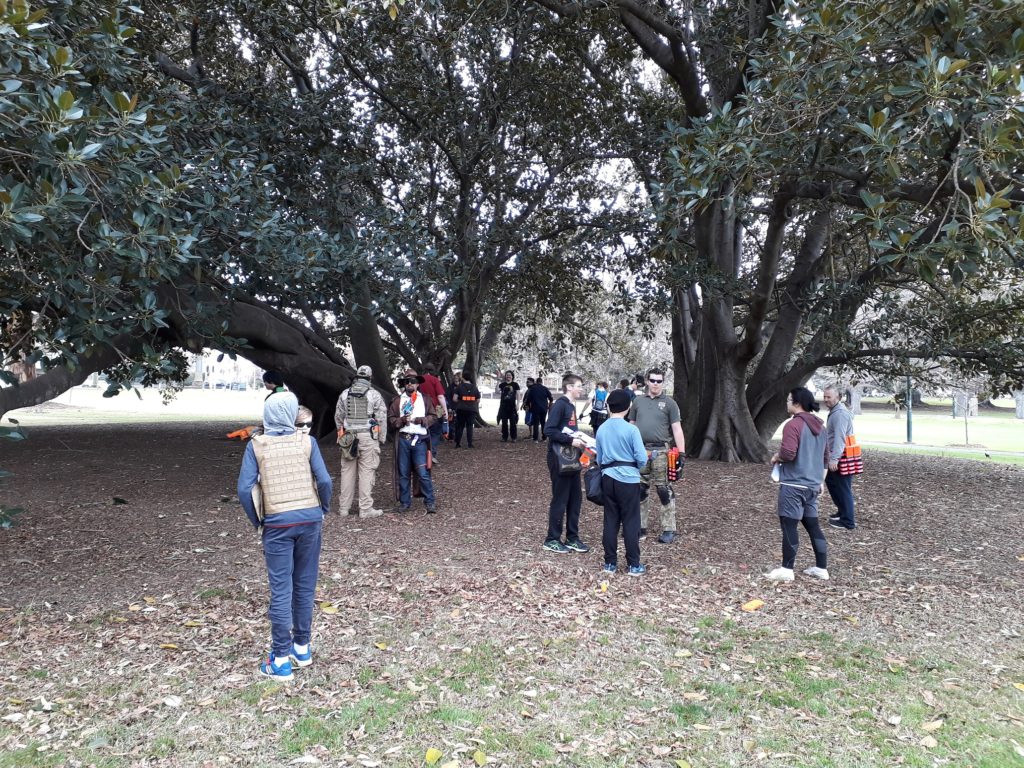 During the time fixing my Bullpup RS, I missed a round of Squad Survival.

The next round was Space Pope.

Right at the start, the Traitor revealed themselves and tagged the General. Now with no reason to conceal their identity, the Space Pope revealed themselves and the humans formed a tight defensive circle around them. However, poor situational awareness and persistent zombie charges resulted in the human group being whittled down slowly. The release of Tanks sped this up substantially, to the point where there was about a 2:1 zombie-human ratio when the Husk was released.

The last couple of minutes were frantic and chaotic, with darts flying in every direction and people everywhere. In one particular skirmish, the three or so Tanks charged in simultaneously from different directions, which caused disarray in what was left of the human defenders. Although the three Tanks were all stunned, they left a substantial opening for other zombies to move in, and I was tagged by one of these zombies. The Space Pope was tagged shortly after, for a zombie victory with around 2.5 minutes left. 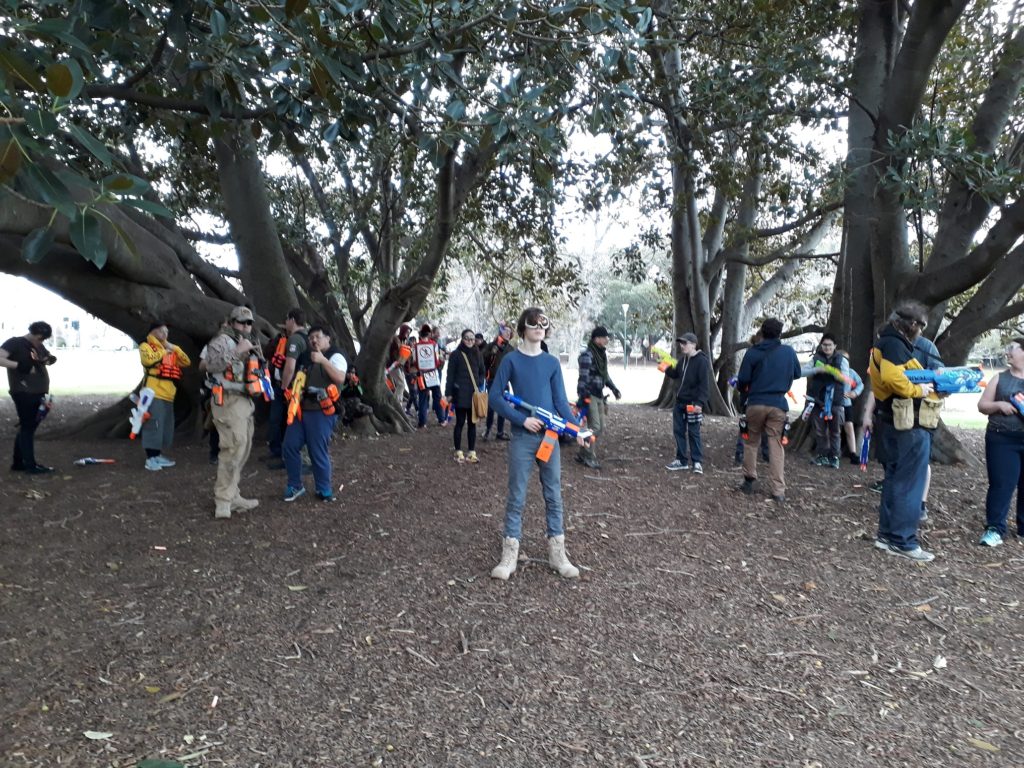 After lunch, we had another round of Space Pope.

This time, I was selected as the Traitor. Early on, the zombies seemed to fare much worse than the previous round, with a lot less random tags and a fair amount more humans. Even the release of Tanks didn’t help too much, with zombie numbers still left quite low. I’d heard a suggestion of who the Space Pope was, and was planning my attack, when suddenly another human revealed themself as a Traitor and tagged the General. Having believed that there was only one Traitor, I checked with some of the other admins on what happened and what to do. After about a minute, they confirmed that there was only one Traitor picked, but the other person genuinely believed that they had been selected. As such, I resumed play as an ordinary human.

The rest of the round was a bit of a zombie slaughter. Even with increased numbers and all mutations, the zombies struggled to make much headway into the human defences. Ultimately, sheer numbers and firepower were simply too much, and the humans easily held out for a human victory. 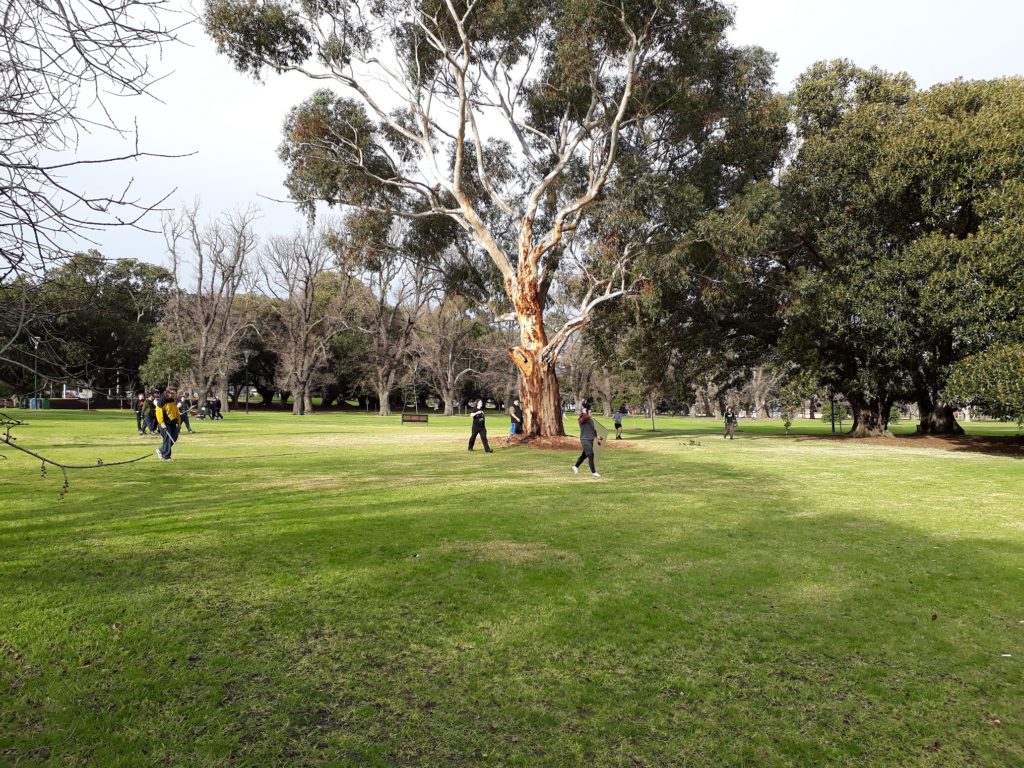 Our last game was a round of VIP Survival.

For this round, we designated the Husk VIP with a Buzz Bee Predator (single-shot bolt action thing), and the Tank VIP with a stock X-Shot Turbo Advance (very weak, even by stock blaster standards). The zombies were allowed to start with Infector weapons, as well as one small and one big shield. From the beginning, I stuck with a small group of humans and we stayed towards the north, with a great view of the other human groups being herded around by the zombies. The Husk VIP was tagged relatively early. By the time the zombie group approached us, they had grown substantially in size, to at least a dozen or so.

We slowly moved towards a corner to draw the zombies closer in. We planned to push directly through the group, which once we crossed over would give us a good distance between us and the zombies. Unfortunately, this didn’t quite go to plan. We engaged the zombies, stunning many of the ones directly ahead of us, and ran past. During this, I was hit on the foot by the Husk, and I believe one or two more humans were tagged as well. With the group now with less numbers than expected, and the zombies receiving Tank reinforcements, the rest of the group was quickly overwhelmed and tagged.

The remaining humans were split into multiple small groups, no more than 3 or 4 per group. These made for easy pickings for a decently sized zombie horde with all upgrades, and each group was overwhelmed one by one. 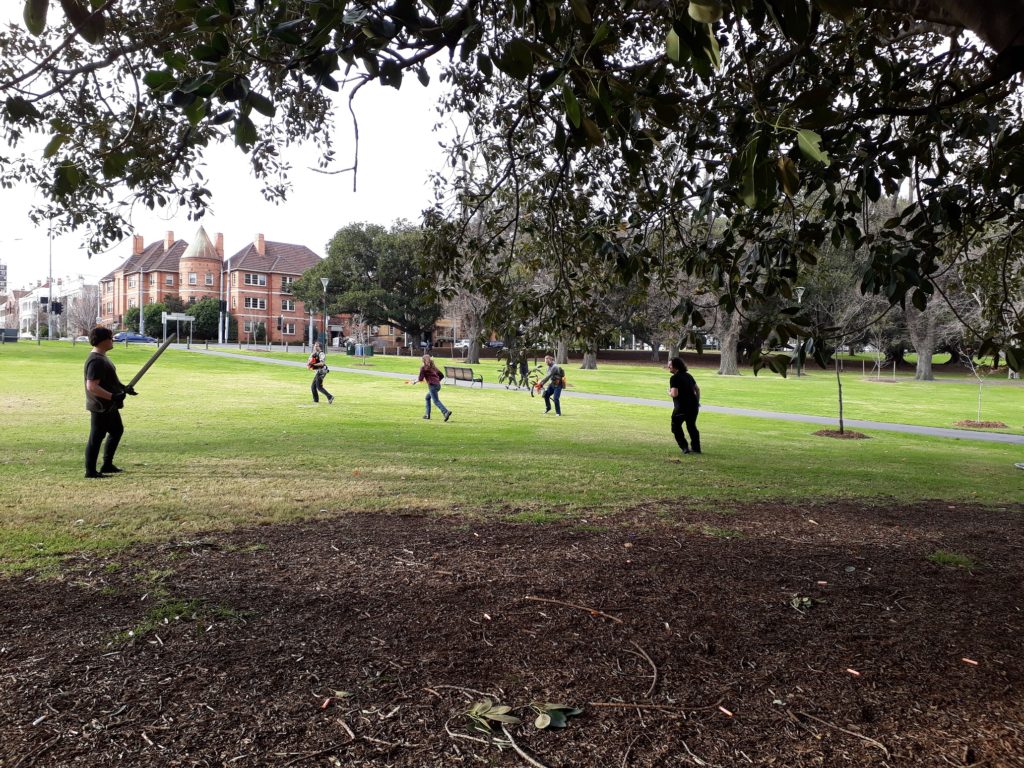 There’s not much new that came out of this event, though it was still a good amount of fun. Coordination and situational awareness still trump raw firepower when it comes to end game survival, and having both is a fearsome combination that can overcome extreme odds.