The Hong Kong Design Patent for the Adventure Force Crossbow.

The Adventure Force Crossbow opts for an eye popping combination of colors, as well as a minimalist approach to shell features. The grip and stock are both small, and they’re possibly even more uncomfortable than the Thermal Hunter. The handle features odd angles that press into your hand (as an adult), and the stock may as well not exist. Even if you’re a small child, this is better wielded like a pistol. Even if it’s larger than a pistol.

The AF Crossbow has very little up front for blaster grip; the included magazines are the best bet. On the topic of magazines, the well they sit in is minimal, as well. The magazine rattles in place, and it is easily pulled out when the breech is retracted – the magazine release doesn’t even need to be pressed. Even with lots of shaking, however, I couldn’t get the magazine to pop loose on its own. I even tried doing so with a 35-round drum, and it stayed in place. So while the small magazine well is annoying, it does seem sound. The lack of a real front grip (outside of a tiny section of ribbed plastic) does bother me, though.

Note that comfortable two-handed grip is virtually impossible when using a drum. 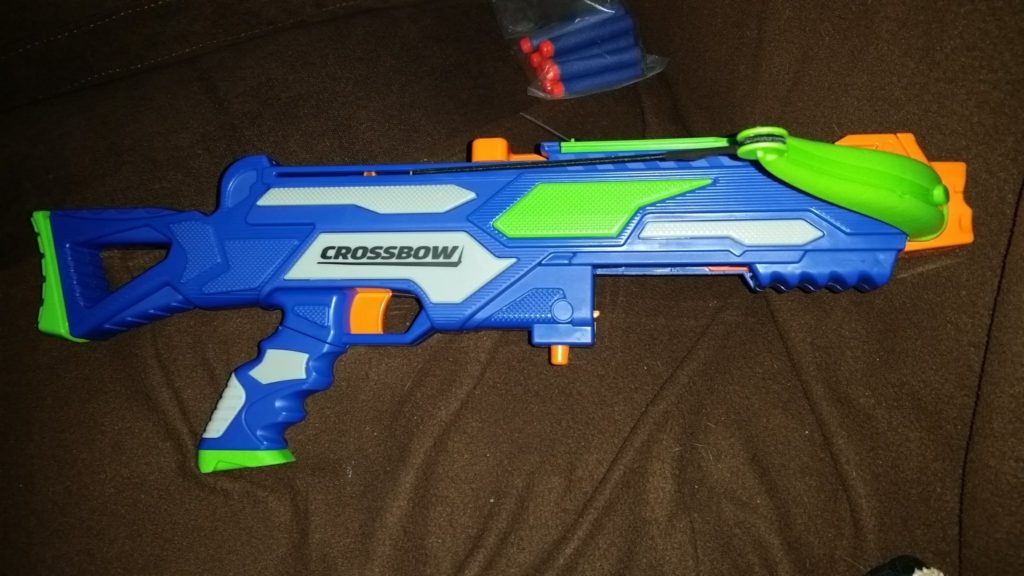 The AF Crossbow is a pullback blaster, similar in operation to the Nerf Crossfire Bow. The attached arms are merely cosmetic, without any real benefit or hindrance to the propulsion system. In this case, however, the priming handle is attached to the plunger tube and breech assembly. This allowed the same style of propulsion as you’d see in most modern mag-fed Buzz Bee blasters. It’s hard to access the internals, but there’s a nice video here illustrating it with the Walking Dead version of the blaster.

As per the current standard, Buzz Bee has an internal box with different levers and springs. This prevents repriming, trigger pull during the prime, etc. You also have to push the priming handle forward again before firing (to close the breech). 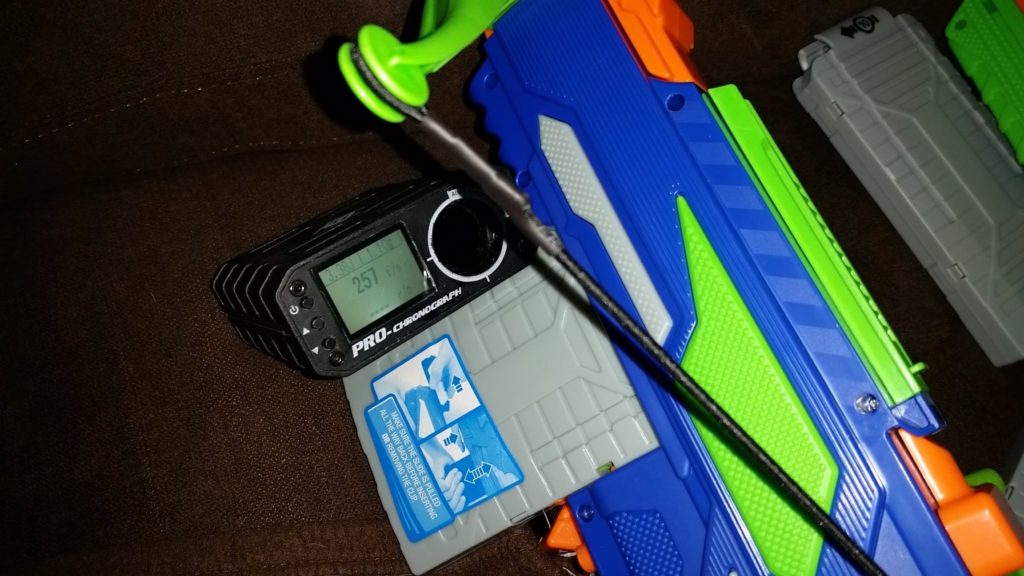 Despite the flaws in ergonomics, the AF Crossbow excels in launching darts. Using the included Long Distance darts, I averaged 88 feet per second. With Nerf Elites, I hit 82fps consistently. This is better than almost all stock spring-powered blasters on the market, and better than most stock flywheel blasters. In addition, the best rate of fire I could get was two darts per second.

The Long Distance darts have no real accuracy to them. If those are your only darts, be warned.

I don’t know how I got the 257fps reading in the picture. That was definitely an error.

The Adventure Force Crossbow is admittedly a bit of an eyesore, especially compared to the Walking Dead version. It also has plenty of ergonomic issues to boot. The one area is has no issues in is power. Darts coming out of the AF Crossbow pack a punch, and $20 includes two stick magazines and a red dot sight. You just have to decide whether the lack of comfort is worth it.