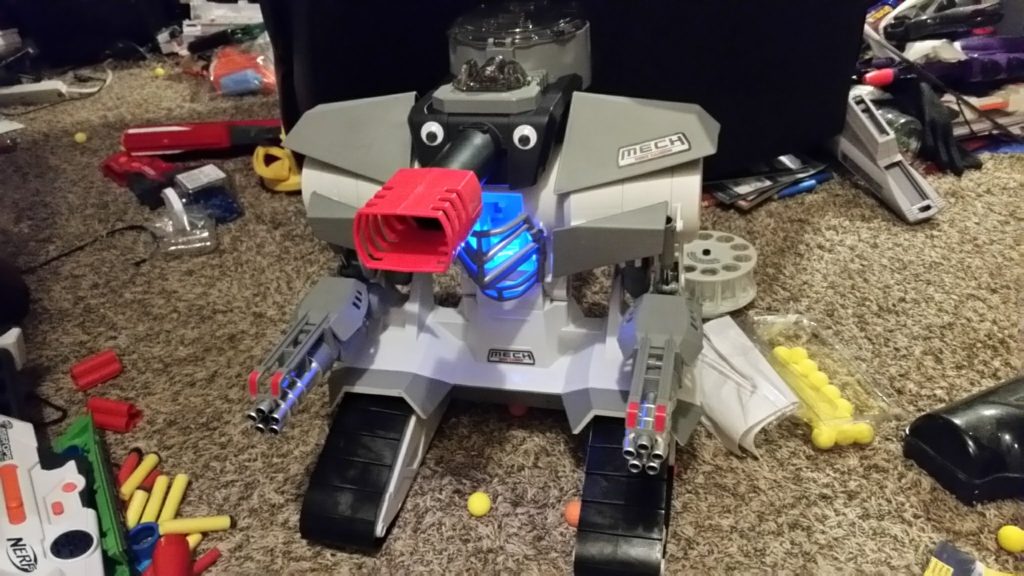 The Robocannon is a large toy with lots of personality. It also helps that it seriously reminds me of Pingu, and just needed googly eyes added to complete the look.

The toy body itself is mostly decorative – the arms serve no function, and the shoulders take up space. Most of the guts are in the middle, with the blaster components at the very top. As a result, it’s fairly top-heavy, even with the wide base and the large tracks. You won’t be driving over large objects with this.

The Robocannon has two independent treads, with a joystick controlling each one. Using them together makes the unit move forward, move backward, or turn. Two buttons control the angle of elevation. One trigger turns the red dot for aiming on and off (mounted on the jam door). The last trigger fires the blaster on top, revving the flywheels and turning the ball ammo hopper.

The Robocannon (at least my model; I have not tried the other versions) glows blue in the “cockpit” when on. On a (near) full charge, it also did better than expected in the ball firing department. It shot slightly faster than a ball each second, and the balls were exiting the barrel at 122 fps on average, quite a bit faster than the 100 fps advertised. 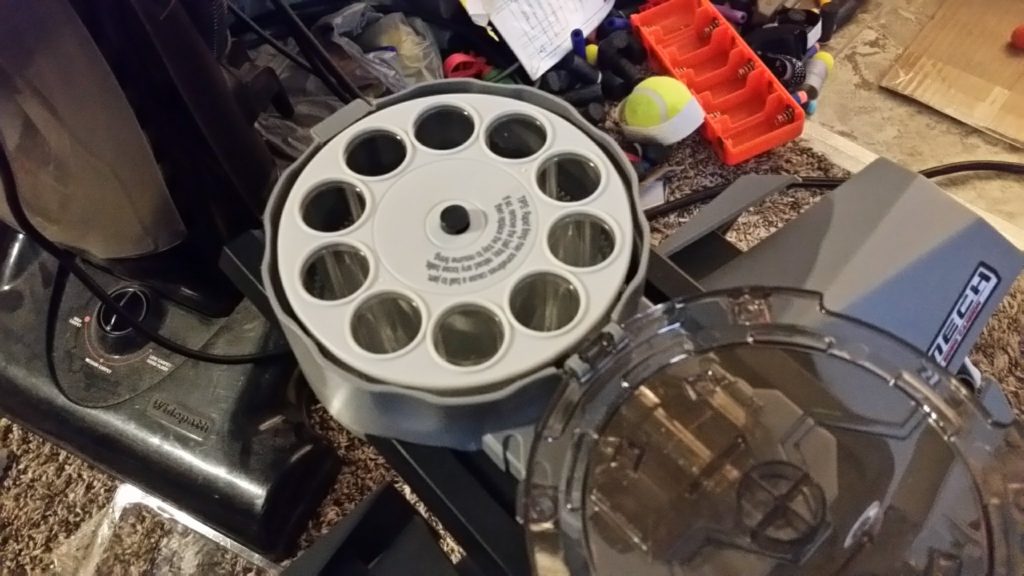 The blaster portion is fed by a rotating ball hopper – the Robocannon comes with fifty rounds of offbrand Rival balls. As soon as you press the fire button, a motor starts turning the hopper, dropping one ball at a time onto a conveyor leading to the flywheels. There isn’t a safety to speak of, in terms of wiring, just a door that opens under the hopper when the middle button is pressed by the compartment lid. So there are options for expanding capacity if you want to put in the work.

The R/C MECH Robocannon isn’t the most useful tool if you’re trying to use this in a real Nerf war, simply due to the slower speeds of an R/C platform compared to a human. For $100, however, it’s a fun R/C experience that does shoot harder than expected, and works consistently. It’s great for indoor use and target practice. I’d still try to use this in a war, even if it doesn’t seem like it would be effective. It would just be fun.