The Commandfire isn’t a blaster meant for beauty contests. It has large, functional parts as opposed to finesse. The grip is quite large, with the on/off switch easily reached by the user’s thumb. It’s not a rev trigger, but it’s quite easy to flip on and off (unlike the Quantum). The front grip is odd, and looks like it should be able to flip down (it doesn’t). Even so, it’s easy to grip and control blaster aim with it. The front of the blaster features a large storage unit for darts. It’s bulky, and yet having 40 darts ready to load is a huge benefit. 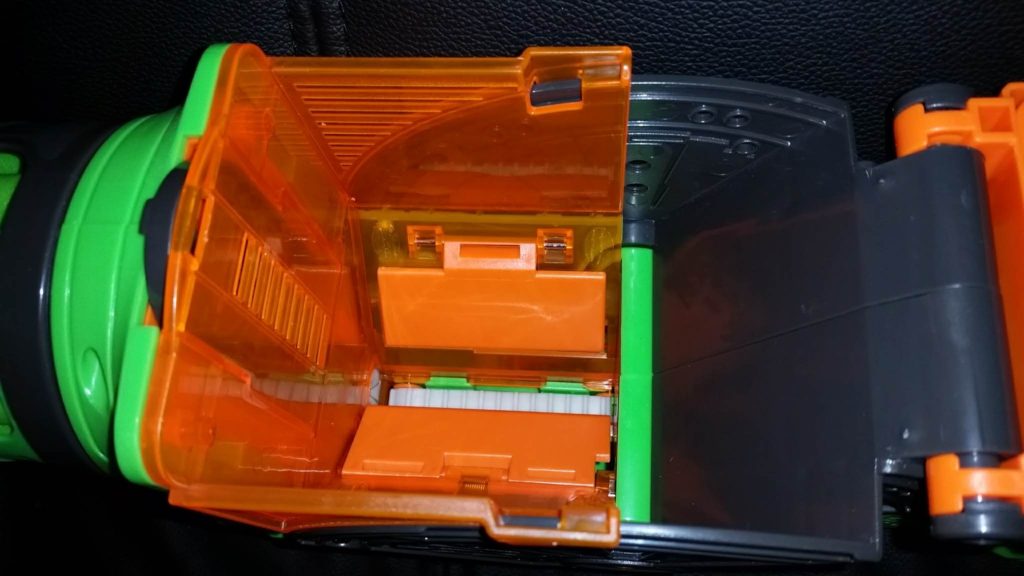 The middle of the blaster is the most unique part of the entire operation. Two flaps sit on either side of the dart “well”, and vibrate when you pull the trigger. This agitates the pile of darts. In addition, the lid has an extending damper that lowers itself along with the pile of darts being fired. Finally, both a belt and a pusher arm are at the bottom for feeding darts into the flywheels. It’s a very unique system that allows fully automatic fire from a pile of darts.

I’ve had this blaster since the last weekend of July, but didn’t get a chance to truly put it through its paces until the BG Undead Summer Invitational. If you feel like going through the video, you’ll see me use the blaster through most of Mission 4. Using the included darts, the blaster was extremely accurate, with most of the misses being the fault of user error. That’s actually a serious statement; I brought nothing but stock blasters that day, instead of pushing the 130fps limit. Skipping darts during full auto fire was relatively rare, although it still happened on occasion (I remember three instances). However, there was enough oomph in my shots that you could maintain a reasonable distance even if the first shot didn’t actually happen. Feeding other darts into the blaster in the briefing room seemed to work fine.

My Commandfire, on fresh AA batteries, averaged 84fps. In addition, it worked well with most darts, although Accustrike darts had a few more misfires/got stuck more often. However, as seen on Reddit, that is possible to fix. Assuming this blaster sells well, hopefully a future (prettier) version will include the fix.

Additionally, the blaster averaged 2.5 darts per second. It’s not the highest rate of fire out there, but it’s sufficient for most stock blaster applications.

The Commandfire relies on a new idea – using a hopper for darts instead of balls (like Rival), and it mostly succeeds. The blaster fires darts quickly and accurately, and has a respectable rate of fire. Misfires or gaps in fire were relatively uncommon, It’s not pretty to look at, but it does its job. And for $40, it’s hard to beat the price for a dart blaster you can reload on the fly.