Zecong Toys has a history of making near-copies of various Nerf blasters – not usually from the same molds, mind you, but made to be very close. On occasion, they go out there and try something somewhat unique, to mixed results.

With the 7100, however, Zecong has a strange confluence of shell design imitation and unique internal choices/compromises. It takes the aesthetics of the Nerf ECS Cam blaster, then uses features that are meant for balls and uses them to fire darts. (This is so they can reuse the shell and parts in a Rival ball-firing blaster, which I do NOT have on hand for review). Sadly, however, due to the low power motors used and the wider than normal motor spacing, performance is subpar.

It’s not a total loss – after an overhaul it becomes an insanely good superstock blaster. But if you’re just looking for a nice new blaster, you’ll be disappointed. 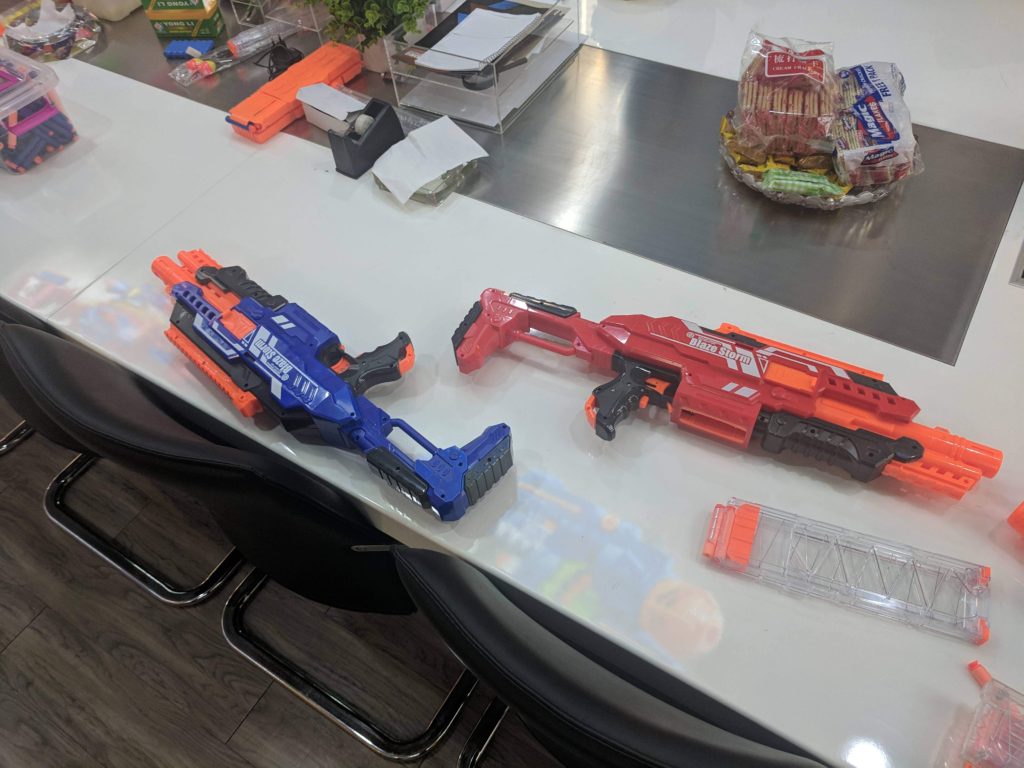 First, thanks to Adrian Kelly for letting me use a pic from his tour at the Zecong factory. It helps explain the unique properties of this blaster.

As you can see, there are in fact two versions. The first (the one I’m reviewing) fires darts and is red. The second is blue, and fires balls from a proprietary Khaos-like magazine. Both are semi-auto. Both use a wide-set Rival flywheel cage. Quite simply, Zecong tried to make one blaster that could be mass produced from the same mold, use common parts, and just swap for parts when it came to the semi-auto pusher mechanism and the shape/size of the magazine insert.

As of this review, only the dart version is available in the US. It comes with a clear 18-dart magazine and operates on 6 AA batteries.

What IS Inside, Anyway?

The 7100, opened up, looks funny due to the large Rival-style wheels. Beyond that, however, it’s a very simple Stryfe-style blaster. An Nstrike-compatible mag gets inserted into the bottom. A rev trigger feeds power to the flywheel motors. The main trigger pushes the top dart of the magazine into the flywheels for firing. It has a long stock on the back, similar to the Nerf ECS Cam.

There are some issues that affect usability in minor ways. The magazine retention tab is rather short, and while it holds 18-round magazines just fine, heavier magazines like drums can actually fall out if you jostle the blaster just right. In addition, the release button is small but adequate.

In addition, the magazine well is narrow enough that it presses in the sides of magazines made by Buzz Bee, preventing them from feeding correctly. I do not have other magazines (like Worker 22s) on hand to test against, but problems may arise. At the very least, though, the blaster will use Nerf stick magazines just fine.

Compromise – Not Always a Good Thing

The 7100 starts to show its weaknesses once you lift out the flywheel cage for closer examination. The blaster may have large Rival-type wheels, but it still uses low-quality 130-sized toy motors. These don’t have enough torque to handle squishing ammo very much without losing lots of speed. Zecong’s solution, it seems, was to set the motors apart WIDER than normal. Rival motor shafts are usually spaced about 53mm apart, and have a roughly 10mm gap between the flywheels. In the 7100, the shafts are 55mm apart, resulting in a ~12mm gap. When the dart is only 12.7mm (0.5″) wide, this results in not much energy being transferred.

I personally find this frustrating. The wheels themselves are solidly built and seem balanced. The motor mounts, if it weren’t for the addition of retaining walls for the tiny motors, would actually be wide enough to accommodate Rival-type motors. The screw mounts used for the plastic motor retainer pieces are even molded into the cage! Of course, 6AA batteries probably can’t run such motors very well. But the possibilities that were there!

As it currently stands, the 7100 shoots darts at roughly 50fps, quite a ways below most stock blasters on the market (mid 60s is usually the bare minimum for Elite blasters). The rate of fire is as fast as you can pull the trigger (semi-auto), but in practice is around four darts per second. However, with the weak motors, shots in quick succession lose power.

Before we get to the final summary, there is the possibility of modifying this blaster into a powerful primary. However, due to the wide motor and wheel placement (and the lack of 130/180 screw mounts), you can’t simply replace the motors and expect good results.

In my case, I designed my own cage for this blaster, with several motor spacing options as well as options for both aftermarket 130/180 motors and Rival motors (all files to be made available soon). My blaster currently has the motors and wheels from an Adventure Force Accelerator, placed at a 51mm spacing. This results in ~8mm of space between the flywheels. Thanks to the large open space in the shell, I didn’t have to cut anything out for the motors or the new wiring. On a somewhat drained 3s lipo battery, all of my shots are above 150fps.

This is after heavily modifying the blaster, mind you. The stock performance is still horrible.

The Blaze Storm 7100 Dart Blaster is a comfortable blaster, and feels like it should be a great blaster – until you pull the trigger, that is. Due to compromises in motor choice, power supply, and trying to have two versions firing two different types of ammo, the result is a rather weak-firing blaster. It has loads of potential if you’re willing to do the work (and I’ll release the files online for various motor spacing options). But if you’re planning on getting this as a gift for someone, or for casual use, your money has better places to go.