This post is less of a review than it is a look at some silly things with potential applications. Let’s face it – generally speaking, $5 blaster toys generally do not do that well. However, little surprises do pop up. In this case, it’s the possibility of controlling other things. Or backup shots. Or firing twenty tanks at once, because why not?

These blasters are all entries in the “Hero” line by Playtek Toys. 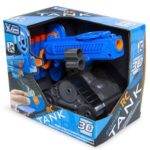 Let’s start with the R/C Tank. It’s essentially a Jolt on wheels (the treads are molded body pieces), with a simple controller. Forward moves the tank forward. Backwards on the controller makes it do a circle in reverse to turn around. This severely limits maneuverability, of course. But it’s a cheap toy for kids, shooting 45-50fps depending on the dart. The tank takes 3 AAA batteries. The remote comes with two 1.5V coin cells.

Each color (red and blue) operates on a different frequency (49mHz for blue, 27mHz for red) – technically, you could do a tank battle if you can manage to aim properly. The angle of fire has to be set by hand. You can see how limited the individual tank can be. In that case, think larger! Without any sort of channel settings, you could technically control as many tanks of one color at the same time as you want.

The antenna for the tank hides under one of the molded treat panels. Inside the shell, we have two motors and a small control board. One motor is connected to the drive wheels in the rear (don’t try to use this on carpet). Going forward, both wheels turn. Going back, only the right rear wheel turns. there is a clutch of some sort in the gear casing for this to happen. The tiny third wheel at the front of the blaster can also shift to help accommodate turning.

The second motor sits under the blaster turret. When you press the fire button, it engages the catch in the blaster for a split second before automatically turning off. Holding down the fire button does not lengthen this time, but pressing the button repeatedly makes the motor continue to run. I mention this because of an interesting application: pull out the electronics inside, and splice them into a separate system, like a turret or a body-mounted blaster. The controller has two inputs, an automatic blaster has two circuits (flywheel and pusher). You can see where I’m going with this.

This one is a personal favorite, but not due to performance (each barrel only gets about 30fps). I spent may semesters doing dorm Assassins games, and I almost always had a wrist blaster of some kind. I also tended to have one on my off arm to act as a secondary at wars. More for emergency shots, or for use in place of barrel taps.

This wrist blaster mounts on your underarm, similar to previous things like the various Spiderman wrist blasters. It has a split trigger, allowing the barrels to be fired independently. It also has a surprisingly stiff pull, due more to priming multiple tubes than to priming a strong blaster.

Under the hood, after removing six screws and two pins in the priming slide, you can find two long plastic arms that connect to the catch pieces in the back. The plunger tubes and barrels are all one piece – no way to take the barrels off.

That’s it for today. These aren’t blaster toys I would recommend for war use or for HvZ purposes. However, they may have select applications that you can adapt them for.