It’s been far too long, and there have been way too many new dart types. As of this post, I’m revamping our dart testing to cover the stock (0.50″) darts currently available on shelves. I’ll evaluate the current darts in terms of fps, how precise they are in hitting a target, and how they stack up in terms of cost.

Note that I’ll be examining things from a stock blaster perspective, as that’s generally all that’s needed to show the virtues and flaws of various darts. In addition, I will not be covering online bulk sales of “offbrand China darts”, which while far cheaper, can have QC issues with head adhesion, crushing in transit, and other things between batches and manufacturer (even if cheap prices on the order of $0.04 a dart  make durability less of a concern). Do note, however, that there are plenty of soft-head darts (Ekind Waffles, Accufakes, etc) that perform extremely well at stock and higher velocities.

Any prices noted are a best attempt at finding bulk prices for MSRP in the United States. Dart packs on sale or clearance can obviously make them more appealing than normal.

We have seven darts under consideration. Nerf has Elite and Accustrike darts. Buzz Bee has three types of darts: Long Distance, Suction Cup, and Precise Pro. Xshot has their own brand of dart. Most recently, Dart Zone has phased out their Super Darts for Sureshot darts. Note that several of these dart types may be found under alternate branding, such as Adventure Force (Walmart).

It should also be noted that some dart types (mainly Buzz Bee) are getting hard to find outside smaller packs; the Precise Pro darts have largely been left to 14 dart packs in various stores, when they once were available in Walmart in 35-dart boxes. It is possible that, depending on retailer choices in the spring, some dart types may no longer be available, or at least not in larger amounts.

To show performance with different blaster types, I used three blasters I’ve had extremely reliable and consistent performance from: the Buzz Bee Tactical Storm (for magazine fed springers), the Buzz Bee Thermal Zenith (for front-loading blasters), and the Dart Zone/Adventure Force Light Command (for flywheel performance). In the end, however, beyond the weight of the dart, the FPS is largely a function of the blaster being used and is of limited use in determining dart quality.

For ammo precision, I opted for a somewhat realistic test: what percent of the several hundred shots fired of each dart type would hit a 3′ x 7′ door at 50′? This test is obviously not nearly as precise as bolting down a blaster and firing at a target, but to me is more realistic in terms of hitting a human target at range. After firing one magazine of darts in the Tactical Storm as a “reset” for my aim, I then ran through 200 darts, doing my best to hit the door. Due to the eight foot ceiling, all shots were kept shallow – don’t intentionally aim for the ceiling, but if a dart veers into it, it’s still a miss.

Interestingly, the Light Command was very consistent in firing darts near the 90FPS mark.

In the other cases, the lighter darts clearly had higher FPS readings, in what amounts to a simple case of Newton’s Second Law. The blaster applied a force to accelerate the darts, and lower mass darts are accelerated faster than higher mass darts.

Overall, however, there isn’t a clear winner just going by initial dart velocity. At least in that respect, there’s nothing preventing any of the darts from achieving high initial speeds. That’s where the next test comes in.

This is the real meat of the testing. It’s a generously large target, at a reasonable distance for foam-flinging combat. 200 darts each were fired down range. And some interesting results were found.

The various precision-oriented darts stacked up well, all scoring above 90%. With human error taken into account, we can say that all of those scored the same.

The next dart in accuracy was the Buzz Bee Suction Cup dart! In fact, the reason why the score wasn’t higher was because many of the darts didn’t travel the entire distance – keep in mind the need to only fire with a shallow arc. The darts might’ve scored just as well as the top tier had the ceiling not been present…but that starts turning into an unfair comparison, since you’re essentially lobbing shots with one dart type. In any case, the current Buzz Bee Suction Cups clearly lose their initial energy very quickly and slow down, limiting usefulness in that regard.

The lowest tier consisted of Nerf Elites, Xshot darts, and Long Distance darts. These scores were absolutely horrendous in comparison, and they show the limitations of these darts in foam combat. It was not uncommon to have darts veer 10′ to the right or left of the target, which was highly disappointing.

And The Winner Is… 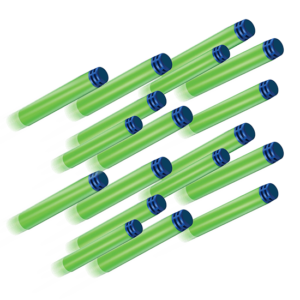 The best stock dart on shelves is, currently, the Dart Zone Sureshot dart. It’s one of the most accurate on the market, and (if you buy the 200 pack under Walmart’s Adventure Force brand) it retails for five cents a dart.

Other precision-based darts like Accustrike and Precise Pro also performed well, but they’re hard to get in bulk, IN STORES, and you end up paying a far higher price. In the case of Accustrikes, the MSRP for a 75 pack is $24.99 (33 cents a dart); for Precise Pro darts (in the Walmart 35 count box, if you can still find it) the price is $8.99, or 25 cents a dart.

Other darts like the Long Distance darts, Elites, and Xshot darts simply aren’t stable enough to consistently hit what you’re aiming for. Xshot darts at least have an advantage in terms of price (500 dart tubs consistently appear for $20, or four cents a dart), but they also sometimes have compatibility issues with lots of magazine-fed blasters due to their shorter length. The rest range in price from ten cents to 16 cents a dart.

Buzz Bee Suction Cups? They’re fun, obviously, and they provided the most interesting results by far due to their low weight and apparently high drag. But I can confidently say they’re far too limited for use due to how quickly they seem to bleed their energy. If you do want them, they are still available in 51 dart packs at Walmart and Academy Sports, for around $0.17 a dart.

In an unofficial test, I used the Light Command to fire all the darts at a consistent 90ish FPS velocity, at a 40 degree angle, to see average ranges. The Buzz Bee Suction Darts placed last, only traveling 68′ on average. Precision based darts landed in the high 80s, Xshot darts in the 90s, and Nerf Elites and Buzz Bee Long Distance Darts broke 100′ on average. Note, of course, that the Xshot, Elite, and Long Distance darts were less of a series of groupings and more of a giant cloud. The rest were far more consistent and clustered together in their respective groups.

If anything, this result has me desiring a better standard for describing dart behavior, something along the lines of actual drag coefficients or, for an easier way of expressing energy loss, chronographing darts at both the blaster barrel and at a specified range (30′ away, perhaps). That still requires having multiple pieces of equipment that cost money, though.

In any case, there’s still something to be said for heavier darts being more consistent overall.