It took a little bit of video scrounging, but we finally have more pics of the Drone Slayer blaster line, thanks to DadGeek UK‘s footage at London Toy Fair. This was from the Re:Creation booth; Re:creation does sales, marketing, and distribution for several companies, including Far Out Toys, in the UK. 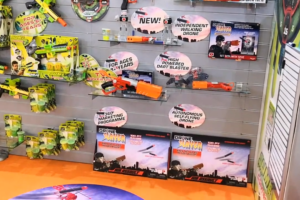 Bottom of the Drone Slayer display. 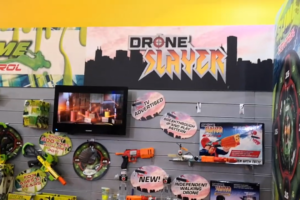 Top of the display. 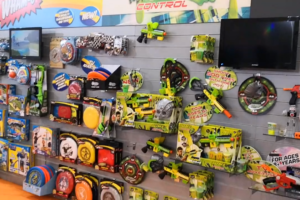 Some of the nearby slime launchers. In case you might have a passing interest.

There appear to not only be a starting variety in blasters, but also several drones. I can only spot one flying variety – I imagine this will work similarly to other “target shooting” hover targets on the market. There are also a few robot-like targets. According to the past press release, there are supposed to be some “explosive” features, but a demonstration isn’t seen on the video.

As for blasters, I can make out at least three different varieties, although the two pistols look fairly similar. Of particular interest is the fact that there appear to be secondary barrels underneath the dart barrels. Are those for IR beams, for alternate types of play? Even the large blaster with two shots has extra slots underneath. It could just be dart storage. At this point, I have no idea.

While we’re on the large blaster, the packaging for the “Air Assault” set claims 100′ ranges! It would appear that Far Out Toys wants their blasters to be competitive with others currently on the market.

There will of course be more speculation, but hopefully all will be answered by New York Toy Fair!