Now that Toy Fair is over, we can sit back and think about what we really enjoyed. What made our eyes light up when we used it? What blasters made us say “Why hasn’t anyone done this sooner?!?”. It’s a very subjective post, but it’s worth chiming in with my opinion on everything I saw.

No Bad News is Good News 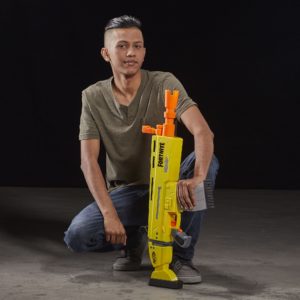 Perhaps most importantly, there was nothing inherently BAD at Toy Fair. Sometimes a company will have a weak showing, or have a blaster that makes you wonder what they were thinking, but that wasn’t the case here. Largely, products had potential and were doing something new, interesting, or inexpensive.

You may not like Fortnite, but the Nerf tie-ins were largely solid products that are going to sell and perform decently, and just in time before the craze slows down. You might not be a fan of Buzz Bee aesthetics, but they’re making blasters that perform solidly at a low price (and innovating in a few new ways), and they’re vastly expanding their presence in stores this year.

Possibly the only thing you can take objection to as a fan was the Prime Time Toys/Dart Zone booth. EVEN THEN, it wasn’t a bad Toy Fair for them, by any means. They simply are in the unique position of selling blasters like hotcakes, especially their Ballistix Ops blasters and Adventure Force-branded lineups. They didnt have to display anything new right now, even if new blasters are in the works.

Rival blasters in particular saw lots of news. And yes, I realize that I’m using Nerf’s brand to collectively refer to them all.

The Perses was everything you’d want in a primary-type blaster. The capacity is lower off the shelf, but it maintains the rechargeable battery and rate of fire of the Prometheus. And it has an amazingly comfortable body, far better than its predecessors. That, and the promise of more Rival blasters later in the year, is a good sign for Nerf.

Even Zuru is getting in on the action, with two internal magazine ball blasters offering similar performance for a lower price. They’re beautiful blasters, and I was visibly excited in the booth after seeing how Zuru handled the loading mechanisms. I will absolutley be buying the Meteor and Orbit when they hit the shelves in May. And I’ll be waiting for their balls to come out en masse so I can see if they match existing options in performance.

I realize that a large segment of readers want the best in performance and will modify blasters as needed. But there’s a special place for blasters that do something unique and do it well. Blasters with personality, you might say.

The Megalodon isn’t going to be a first choice for people in competitive settings. But 20 Mega darts, operating off of a crank handle and trigger, plus slam fire? It’s just fun! A Buzz Bee blow gun blaster that you blow into to operate the air tank? It’s silly in concept, and yet it can get those long ranges all the same, and there’s no need to buy 3′ of PVC pipe from the hardware store.

Zing Ax throwing? Stupid fun, and the all-foam design means it would likely be safe for use at wars. Even the Hyperstike is something you have to love – those ranges on a toy are insane, and insanely fun. And if you want a bow that’s a bit more competition-friendly, there’s going to be more options coming in the near future.

Affordability is a Concern 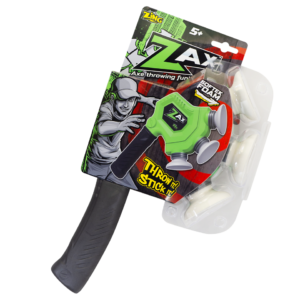 This aspect was highlighted recently at Hasbro’s quarterly earnings meeting, where other manufacturers are cutting into the lower price points at retailers. Dart Zone, Zuru, and Buzz Bee all have solid offerings either on shelves or coming soon. Sure, Nerf may have lots of cool blasters on display this Toy Fair, but there’s only so many $100 blasters you can realistically sell.

However, even if not everything at Hasbro’s event was in the “value” price range, they do have plenty more blasters incoming this year, to be announced at other events. Jared’s Epic Nerf Battle, Hascon, etc. all are prime places for Hasbro to show off newer products, to keep the hype going year-round.

Is there no way I can get my hands on the giant porcupine that launched oversized Nerf darts? I’m, uh, asking for a friend…