Here we head into day two. Media will start pouring out from Hasbro after the more social events of yesterday, and other updates will happen. Here we go!

This is the recoloring mentioned earlier. Xshot has a partnership with the popular Twitch streamer Ninja, and will be putting these blasters to market ASAP. Ninja had lots of these types of toys this year, actually, since streaming personalities are the current trend. There are a few other blasters as well, but ultimately nothing new in this line. 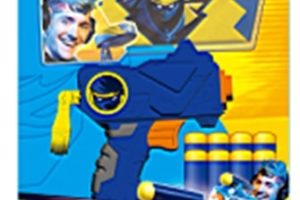 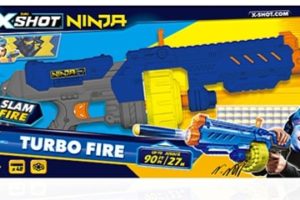 The Bunkr booth was at the back of the third floor exhibit hall, with new and old inflatables on display along with various accessories both silly and serious (ammo bins, inflatables with targets, and even “ammo drop” parachutes you throw).

In addition, they’re excited to be working on the logistics for season two of the National Blaster League – Season One did well enough to start bringing in sponsors (both in terms of blasters and supplies), and online interest in people joining as players was far larger than anticipated.

NBL is a unique product that, for lack of a better summary, is like the love child of WWE and blaster tag. It may be a scripted event, but it is entertaining in its own right. And if it raises the profile of the hobby in a good way, then I’m all for it.

Oh boy, it’s the big one. Got to get my hands on the new blasters, and they’re so much fun. Didn’t remember to turn on the video until after trying the Perses, but that one was satisfying. And almost the perfect form factor, as well, even if it only holds 50 rounds. I’ll be making a separate post focusing just on the tour, so as to do it a bit more justice. Also, because I have to wait for video to upload. Hotel internet doesn’t compare to home.

The main thing on today’s agenda was Hasbro. Buzz Bee’s event is tomorrow morning, and I’ll be covering that. Also, I’ll be spreading out more things to other people in the hobby – yesterday’s footage went to This Week in Nerf, and my footage from Hasbro is up in its own post now. I’ll post a bunch of pics for Buzz Bee’s event, but you can check out WalcomS7’s channel for the video tomorrow!