Author’s note: while I did buy one of these myself, I also got one sent to me (for free) by Hasbro. Thanks, guys!

The Nerf brand is most closely associated with the blasters, balls, and foam sports equipment. Sometimes, however, it ends up in the strangest of places, like the Nerf Battle Racer. In the same vein, we now have the Flybar Nerf Blaster Scooter. It’s literally a kid’s scooter with a Nerf blaster mounted on top of the handlebars. It’s obviously meant for kids, even if some adults like me are light enough to safely use it. The blaster is very limited in usefulness while mounted, and seems to have issues with half the magazines I try to use with it. It’s still a fun toy, and it’s something I’ll gladly tear apart and rebuild for science, but it’s not something I’d recommend buying.

The scooter is of the three-wheeled variety, with non-moving handlebars. You steer the scooter by leaning in the direction of travel, or at least tilting the handlebars in that direction. As someone who’s used to riding two-wheeled kick scooters, this threw me for a bit of a loop, especially the slower turning. However, I understand the reasoning behind it. If you’re marketing a Nerf scooter, with a mounted blaster, you’re going to go for the more stable firing platform. It also makes it easier to ride and fire at the same time. Not to mention the scooter stands by itself, and isn’t going to fall over and break the blaster every time the kid lets go of it.

I would prefer a two-wheeled option, just because you’d have so much more control. You could even spin the blaster in place while standing to chase a moving target. But I can at least accept why things are done this way.

The handlebars attach and detach from the board by pressing the orange button at the base of the shaft.

Out of the box, there are two parts to the blaster – the battery tray and triggers are on the handlebars, and the blaster itself is its own unit. The pieces slide together, with a small 4-port connector providing the hookups for the battery leads and the triggers.

The blaster itself is a Rhino Fire, but in a much smaller package (and without giant barrels). It’s still the same layout, as well. Double shafted motors up front, powering two sets of flywheels, and a pusher that alternates between magazines. There are a few safety switches, keeping the blaster off when unloaded or when the jam door is open. The dual triggers are single action, powering up the flywheels and then firing the blaster. You simply hold the trigger button down (both do the same thing) for rapid fire. 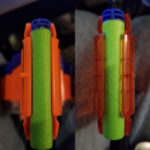 Curiously, the included magazines actually have extra tabs to ensure the loaded magazine safety engages, regardless of clip orientation. Shown for comparison is an Infinus drum. Given that these tabs were not needed for proper Rhino Fire function (they were not on the drums), I’m not sure why they are necessary now.

I’ll admit I’m slightly disappointed to not have the Rhino Fire’s twin barrels extending back and forth, but that’s just because it was so silly.

The Nerf Blaster Scooter is fun to use, once you get the hang of it, but it’s not very useful. Don’t expect to be rolling into a war and tearing up opponents with your scooter – you don’t have the range, power, or maneuverability. It’s a neat concept, just one that doesn’t seem to quite be there yet, especially since it doesn’t like to lock in other Nerf magazines.

Don’t worry, that part will just take some time. Besides, I did buy one scooter for myself!