The current water blaster landscape is, aside from a few exceptions, dominated by manually-fired pump blasters. Because of that, available blasters have to stand out in some way. In the case of the Xshot Fast Fill, it’s being able to, well, fill it fast. That, coupled with a decent water output, makes for a fun, if otherwise standard, water blaster for a good price.

The original version of the Fast Fill was made by a Kiwi inventor, as detailed here. After polishing the blaster for performance, the inventor showed it off to Zuru, and the rest is history (as the saying goes).

The Fast Fill comes in a good looking, bright shell, with white, green, and blue plastic. Two Xshot stickers sit on the translucent green reservoir. While the Fast Fill isn’t the same plastic feel as other soakers, the construction feels solid. The handle and pump grip have enough texture to not slip during use.

The back of the blaster features a large door, with an orange button you manipulate to flip the door open. Dunk the blaster in water (or fill via other means), snap the lid shut, and blast! After you run out of water, do it again as needed. As advertised, it was fast to fill, and the “one second” claims seem to be accurate.

The insides of the blaster are largely what you’d expect. The reservoir holds 700mL of water (about 24 fl oz), and the pump seems to hold roughly 22mL (based on firing and measuring the output).

As for range claims, the Fast Fill can exceed the stated 34’/10m ranges by a bit. The stream, while short in duration, is fairly strong and stays together long enough to hit those long ranges. Of course, if you’re purposefully trying to soak someone from as far away as possible, your aim will probably be off a bit. 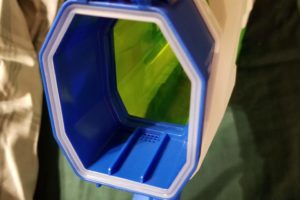 The water pump intake at the back of the reservoir. 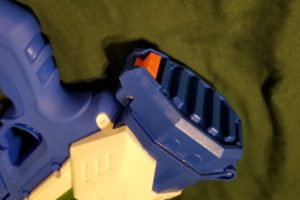 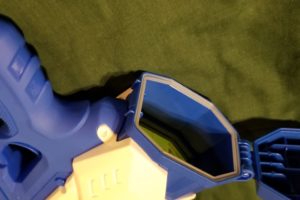 The front of the reservoir has a check valve, so as to not draw a vacuum.

For $10, the Fast Fill is a solid option for poolside or backyard water wars. It has plenty of volume for its size, has decently powered shots (based on how hard you pump), and is indeed fast to fill. It’s a great option for kids, and it’s a serviceable option if you’re more of a “water warfare” type. Assuming, of course, that you aren’t facing down someone wielding a pressure-based water blaster. 🙂