I was up late doing work, and decided to watch WalcomS7’s unboxing of the new Xshot Ninja series blasters. Nothing new, really, as the blasters had appeared at Toy Fair back in February (although it’s nice to know they’re coming to shelves soon).

What I did notice, however, was that the same old label is still being used to promote the Xshot darts. Based off 2014 testing. It’s safe to say that things have changed since then, which begs the question: how is this still a thing? 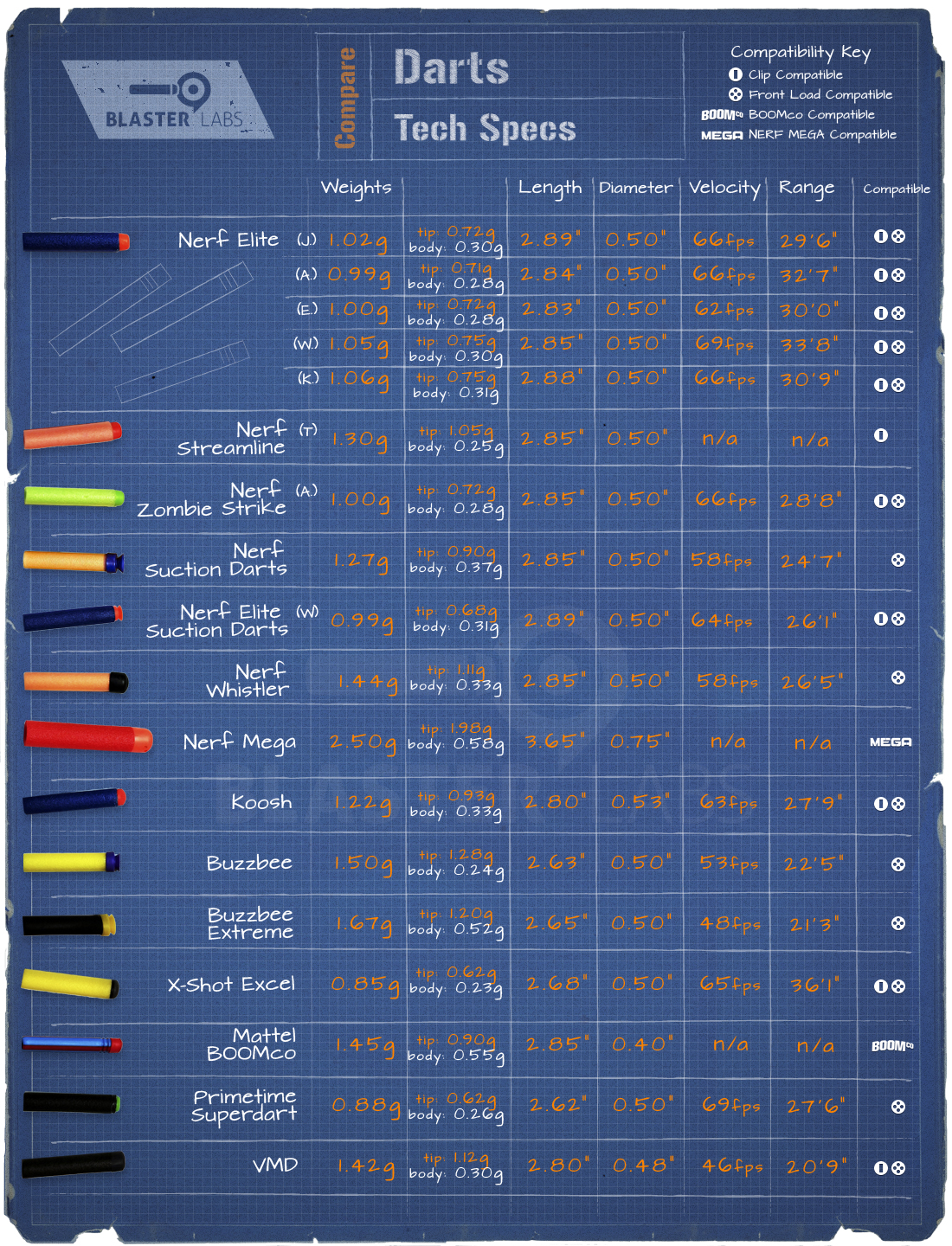 A refresher of the testing from back in 2014.

Back in 2014, when this website was originally Blaster Labs (and before I was here), there was a test with the commonly available darts of the time.

Readers are more than welcome to look at the testing methods. In this case, distance was tested by firing flat with a Nerf Strongarm, but with relatively few shots taken of each dart type. This was done to accommodate the large volume of darts to test. In the testing, the Xshot darts, some of the lightest on the market, went farther than the others.

Since, then, Xshot has chosen to market their darts as the Dart Range Test Winner, first with the Blaster Labs logo, then Blaster Hub. This in itself was decent in terms of marketing – highlight testing in your favor, etc. Xshot darts are far from the most accurate thing you can buy – but that’s not what the little emblem says. It’s just there to make you think good things.

However, that was 2014. It’s 2019, and lots of changed have occurred, both in the darts available and in the power of the blasters firing them.

I’ll admit, life has gotten in the way of posting as much as I’d like. There are pages of data that got recorded (in multple years) that sat on shelves as new blasters hit shelves (and thus the page posts), and eventually got lost. I finally got around to doing a test at the end of last year, determining that the Dart Zone Sure Shot darts (and their Adventure Force branded versions) were the best store-bought darts on the market, providing both decent dart velocity out of modern blasters and excellent precision. Many other Nerf personalities will share that opinion.

However, the question remains: are the Xshot darts still a “Range Test” winner? Not so much anymore.

Anatomy of a Dart

Dart flight (if we ignore accuracy) comes down to a few things: initial energy, dart mass, and dart aerodynamics. The blaster provides x amount of kinetic energy to the dart. In spring-powered blasters (like Xshot produces), you compress a small volume of air behind the dart to push it out. Lighter darts will have a higher velocity than heavier darts ( KE = [1/2]mv^2, for those who remember their physics). Other variances in foam diameter, barrel tightness, etc. can also have an effect, but that’s the main part of the process. This is why Xshot darts, modern Buzz Bee suction, and Buzz Bee Long Distance darts have such high initial velocities.

After the dart is in motion, it bleeds off energy due to friction with the air. As such, more rounded or pointed darts will bleed less energy and travel farther. Buzz Bee Long Distance darts, for example, maintain their velocity, while the flat suction cup darts bleed so much energy that they really don’t have much use beyond close range, even if they’re accurate.

Xshot darts have a lower mass, but a decently streamlined shape, so out of a spring-powered blaster, they can indeed win in the dart range…some of the time. There’s a reason Buzz Bee advertises 100′ ranges with their Long Distance darts – they can actually do it. And depending on the blaster being used, those will win the day if range is all you care about.

If we really want to be specific, I can grab my (new version) Xshot Xcess and load it with brand new darts, both Xshot and Buzz Bee Long Distance darts, and the LD darts will win by several feet when fired at the exact same angle for maximum distance. They’ll fly in a weirdly spiraling path, yes, but they’ll ultimately win in distance.

One more angle to look at is launching all the darts at a similar velocity and seeing what happens. Stock flywheel blasters are good for this, as they transfer energy differently, mainly by squeezing the dart head as it passes. When using a Light Command to launch all darts at an angle at ~90 fps, both Buzz Bee Long Distance Darts and Nerf Elites traveled farther. Seeing as there are so many electric blasters on the market today, this metric is just as relevant as using a single Strongarm for testing.

Xshot, at this point you really just need to stop claiming the best range test dart, especially when the test was five years old and based around a single blaster. If I really have to, I can find a nice large indoor space to officially show why this should stop.

You’ve been doing so great recently with the redesigned blaster line, and have made sure people can use regular darts with most of your blasters. That’s a good thing. Perhaps sometime soon, you can bring your darts into the future, making them the same length as everything else and performing well for that low price you’re known for.

I can’t stop you from continuing that little piece of marketing. But I really wish you would.