Since Dart Zone just posted the next teaser for Dart Zone Pro, I may as well cover that and the blasters shown at Foamcon! The blasters on hand were fun to use and impressive updates on previous designs (as well as new ones, if you can call a Kronos competitor new). 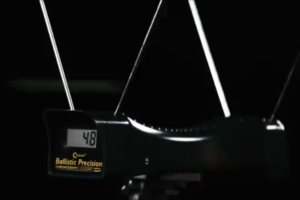 Dart in flight for DZ Pro 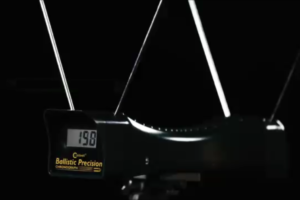 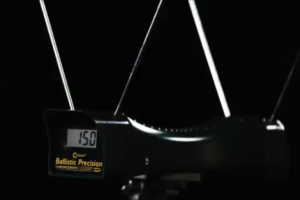 You can watch the video here – Dart Zone teases with noises that make me assume this product is spring based (hopefully pump action). Furthermore, it does in fact show a dart flying across the chronograph – I accidentally paused at the right point to see 198 – which, while it would be amazing, clearly is not the 150fps they advertise. Turns out I had just found the frame of video showing the display changing from 48 to 150.

The dart is only caught briefly on screen, as a long blur. It appears green, but there’s no true way of knowing if we’re still using Dart Zone’s full length darts or something shorter. We have until July 15th for info to completely come out, however!

There are several pictures to look at. I’m not going to try and review the blasters on the spot – I’d rather have it in hand and run it in an event first (which actually could have been a good idea for Dart Zone – find people willing to film themselves using the blaster for a mission). But what was there was impressive, in my opinion.

Firstly, the V-twin. I hadn’t put much thought into the blaster because Dart Zone makes so many chain blasters. But they’ve completely redone it for better rate of fire, which is a great surprise. The V-twin has both rev and firing triggers. The end “bells” the chain wraps around have dart storage. Most importantly, however, are the chains and pusher mechanism. I name the two together for a reason – instead of a standard pusher poking the dart forward, the V-twin has a motor driving a toothed wheel on the underside of the loading door. The chains, meanwhile, have a large section cut out. As the chains move past, the toothed wheel goes into that gap and throws the dart forward. It’s basically the chain fed equivalent of a Hyperfire belt, and I love the idea. As a result, the V-twin has a far higher rate of fire than previous stock chain-fed blasters.

The other dart blasters, the Savage Spin and Destroyer, were largely what we expected. The Savage Spin (shown earlier by Drac) is a lovely update to their previous flywheel efforts, and it’s comfortable to use. The Destroyer, meanwhile, seems to fire much faster than the Commandfire that came before it, while having the two trigger setup. It also had a small loading door on the side, in addition to the main hopper door. This lets you push individual darts into the hopper supply while scavenging; no reason for a zombie to catch you with the hopper open (and in reality disabled) during gameplay.

But What About The Balls?

Two ball blasters were on display – the previously announced Sentry X2, and the XL-10.

The Sentry, as shown by the Rochester Foam Dart League, is similar to the Kronos in its role, but loads from the front.

The XL-10, however, is a new design. It has a tubular internal magazine, and it loads like a shotgun from the loading door. If I remember correctly, it’ll be a Walmart online exclusive.