The first of the Walmart-exclusive blasters announced at Jared’s Epic Nerf Battle is here at last! The Rival Edge Mercury marks the start of a new line of Rival blasters with a “target practice” theme to them. Under the bolt-action prime and cool new shell, however, is another Rival Kronos. Which, given the success of that blaster, is far from a bad thing. 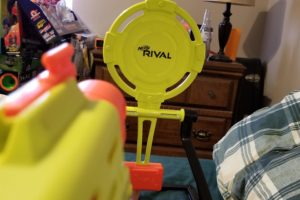 The Mercury comes in a few pieces in box, but doesn’t need any tools for assembly. The priming handle can screw into either side of the blaster (and be removed), making the bolt action work for all users. The target, meanwhile, has a few pieces that snap together to form the stand. The target itself is fairly sturdy, though not very thick. However, it’s also designed to be shot by stock Rival blasters, so it’s perfectly satisfactory in that regard. It does move when hit, and resets due to the weight in the orange block underneath.

The Mercury itself has more than a few external differences from the Kronos. The Mercury goes for a smoother exterior, as opposed to the typically industrial Rival look. It features several clear plastic pieces, including panels on the sides that reveal the ammo currently loaded. The overall length is slightly longer due to the barrel.

One big difference is in the grip. On the Mercury, the grip is rather large, with no contours for your other fingers. I don’t mind the chunky grip myself, but smaller hands may have an issue.

Lastly, the Mercury does prime via bolt action, instead of using a top-priming slide. The motion itself is smooth as expected. However, this unique feature also may be awkward for some people – you’re trying to compress the spring in a small motion, with a relatively small handle, and not with a large rack and gear system like you see in the Helios (or a stock to prime against, like the upcoming Jupiter).

Stock performance is as advertised – my Mercury averaged exactly 90fps. In addition, I was able to smoothly fire one ball per second – since this is a line meant for plinking targets, rate of fire isn’t of the utmost concern.

It’s very easy to keep track of how many rounds remain, thanks to the clear windows. That’s always a plus. 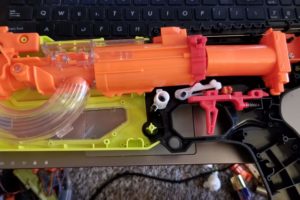 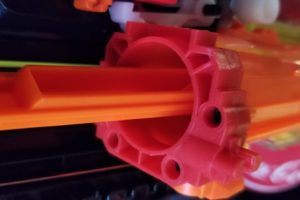 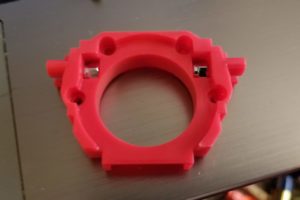 Internally, there is a major difference in the Mercury – the addition of a large plastic piece that screws onto the back of the plunger tube. It contains two nuts, and it allows the insertion of the bolt handle for blaster priming. At a glance, it appears to be sturdy enough for light spring upgrades. I will be using the blaster extensively at a few upcoming events (I’ve already replaced my stock spring with 8 coils of a K25 spring) and will update this post if there are any problems. I’m averaging 115fps with the new spring. HIRs seem to still be shooting straight, and the prime isn’t too hard, either.

The Rival Edge Mercury is the newest version of the Kronos, with a fun new shell and bolt-action priming. It also comes with a target that moves when hit. Objectively, it’s still a solid blaster, and having a target to shoot is fun. It just becomes a question of whether you want to pay $25 for an existing blaster in a new shell, plus the target. This will largely be a matter of personal preference, especially with the bolt-action prime.