Earlier in the summer, Dart Zone opened up preorders for the Dart Zone Pro Mk-1; it was a new blaster designed around a proprietary dart type. They claimed 150fps performance, half and full length dart compatibility, and great range and accuracy. By any of those measures, the Mk-1 is a great success, and a fine entry blaster into the “superstock” realm of blasters. However, it does come with some limitations in compatibility and operation. It’s also, at least in its current form, limited in getting extra power – although a few people have made some progress,

In any case, now is as good a time for a review as any – the blasters may have sold out, but the compatible magazines are up for preorder, making it still relevant for now.

The Dart Zone Pro Mk-1 fills a niche above that of standard blasters – one filled by modified Retaliators, Worker blaster kits, and the like. Unlike the other options, however, the Mk-1 comes essentially complete. All that’s needed is to screw in a few bolts, connect the front and back, and attach the priming grip with a screwdriver. From there, you can just load either half or full length darts and fire away. (There is a half-length mag adapter included)

The Mk-1 comes with two barrels. As shipped, the tighter metal barrel is installed in the front half of the blaster. Changing it out for the wider plastic barrel only requires taking out the four screws in the barrel cap and moving out the retaining screw a little bit. That screw can be reached through the gap under the barrel, where the priming grip tracks (DON’T REMOVE IT!). The picture shown just has everything taken apart to show all the pieces.

Meanwhile, the stock follows the typical M4 stock design, with a rubber covering at the end (spare o-rings are hidden underneath). It can support a decent amount of force before collapsing; however, results among owners have varied. I have yet to encounter issues in normal play, but aggressive priming should be avoided. It’s an unfortunate downside to an otherwise stellar blaster shell.

The priming grip is sturdy, albeit with a bit of wobble, due to how it attaches. The main grip is comfortable, with a rubberized coating, with an easy to pull trigger and a handy mag release. All things considered, the Mk-1 is nice. 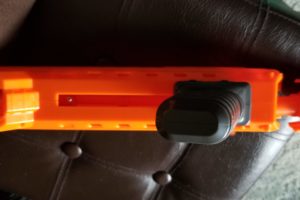 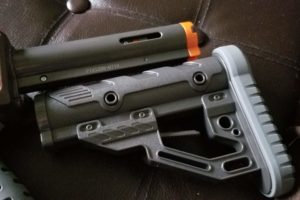 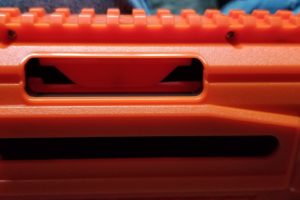 The Mk-1 shipped with full length and half length “bamboo” darts. These feature foam bodies slightly smaller in diameter, with ribs that extend out to the usual ~.50 cal diameter. The dart heads have give to them, are glued quite well, and have yet to decapitate from either firing or hitting hard surfaces. They also seem to have stellar characteristics in higher power applications, as seen here. It’s currently unknown when these darts can be purchased in bulk, but hopefully it’s soon.

On the topic of darts, it should be noted that wide-head darts aren’t perfectly compatible – they’ll catch on the metal barrel, but can be fired with decent speed out of the plastic barrel. HOWEVER, there is an issue with foam diameter – slightly wide darts don’t always like to feed into the dart gate prior to the barrel. If you are priming fast, there’s a solid chance that you’ll shove the dart most of the way in, but get the tail end caught between the barrel and bolt. Firing the blaster like this seals up and stops the system until you move the priming grip back slightly. Darts will then generally fire, but at slower speeds due to the introduced air leak. Prime slower if you notice this happening – I know of several fixes being worked on, including the use of Retaliator/Prophecy dart gates and bolt o-rings for a more consistent seal and less sensitive barrel entrance.

The blaster feeds the new darts wonderfully. But issues with darts overall are a knock against it, especially without bulk bamboo darts being available (for now). Personally, I’m sticking with the stock darts and Worker Gen3 short darts.

In game, however, with the included darts, the Mk-1 truly shines. Using the metal barrel, the full length darts averaged 151fps, and the short darts 164fps. They also were amazingly accurate, far more than expected. At my last indoor war, I found myself being able to aim and hit whatever I was pointing at (adjusting for movement, of course). It was to the point where I could aim for someone’s hand and hit it (an important distinction in a club where blaster hits don’t count).

Full length darts in my plastic barrel averaged 136fps, just above the threshold for most HvZ games (insert sadface).

Rate of fire was fairly slow, although that was partly me being cautious in using the blaster for the first time. Generally, you can do one shot every two seconds. I did have two jams, with both darts being easy to remove with the included jam tool. I was able to get back into the game quickly after those jams.

There is one thing to note, that a conversation in the Facebook post of this review reminded me of. I used mainly full length mags, including standard 18-rounders from Nerf. They generally seat in the blaster, but the nub at the back sits right against the shell, putting a slight angle on it. One mag with off tolerances didn’t sit right and fell out. As pictured, it’s possible to shave this nub down without breaking through the plastic, making it sit right. Another annoying thing to account for, since Nerf mags are the standard this is supposed to also accept.

The Dart Zone Pro Mk-1 isn’t perfect. However, a lot of those imperfections are from the modding viewpoint, where we’d like to see blasters capable of more – and we look at inefficiencies and design choices in a different light than normal.

As is, the Dart Zone Mk-1 delivers on its promises of power, accuracy, and easy use. You can throw it in the trunk, show up to a game, and use the blaster, with little maintenance needed. In my case, with limited time for actually modifying blasters, it’s the perfect thing to use. There are just little things like the wide dart feeding issues that keep me from rating it even higher.

In any case, I look forward to seeing how Prime Time Toys supports the DZP line, in terms of darts, mags, and future blasters.