The Auto Tommy 20 is a venerable staple of early 2000s blasting; it served as many people’s first experience with a flywheel blaster. In spite of its flaws (inaccurate, limited range, goofy shape), it remained a beloved staple of childhood Nerf collections. Now, after making brief appearances at Toy Fairs and in Europe, its successor, the Powermech, is here. It doesn’t correct all the flaws of the original, but it does bring the blaster into the modern era – with room to upgrade.

The Powermech, as id turns out, doesn’t stray far from its roots. It’s still a 20 shot, automatic flywheel blaster. It still has the front half that folds upward, with contacts connecting the flywheels. It still has the odd stock with the hole in it. It does, however, run on four AAs; the old version ran on three. It also takes modern darts – the original only has enough space for classic Buzz Bee suction darts. That in itself is a huge improvement in viability.

It does, however, keep the classic two-stage setup. Partial trigger pull powers the flywheels, while a full pull turns on the pusher and cylinder mechanism.

The blaster, like the last one, is clearly more designed for spraying than praying. There’s a single aiming sight, sticking up in the front, mainly as a directional indicator. The front grip is quite undersized, although Buzz Bee tends to design more for small kids than adults (it does say 6+ in the upper corner of the package). Trying to use it as is, though, contorts the arm close enough to rub against the drum; it’s just poorly designed for anyone but kids, and needed to be angled. The main grip is also similarly child-sized, with a tight grip that pinches the base of the adult thumb if you grip it tightly.

There is a single rail on top, should you have any Buzz Bee attachments. While the shell has comfort issues, it is solidly built.

With fresh AA batteries, the Powermech fires three darts per second. With the included darts, it averaged 82fps, and slightly less (77fps) with Nerf and Adventure Force darts (which are heavier).

In addition, an old problem reared its ugly head. The Auto Tommy 20 had a tendency to spit darts out along a wide horizontal spread – be it issues with the motors or the ribbed flywheels, darts often didn’t fly straight out the barrel. The same happens here with the Powermech. Granted, better darts will fly straight once they’re launched. But they may not launch toward the target at which you’re aiming.

One more thing to note: the blaster shakes in hand as the cylinder rotates, simply due to the quickly indexing mass. It detracts a bit from accuracy, but adds to the fun of feeling “powerful”. I’m sure that’s more impressive for children. 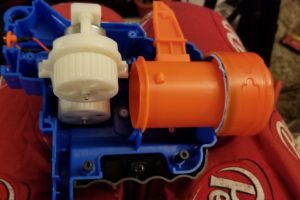 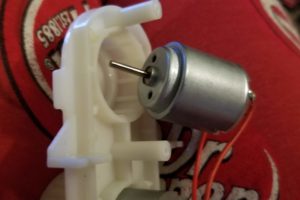 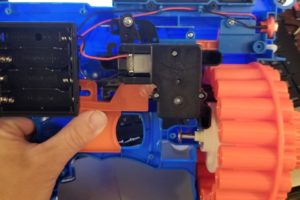 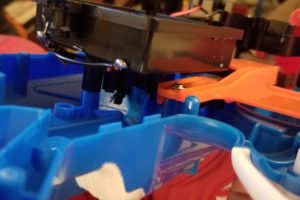 The Powermech, like most Buzz Bee blasters, has the orange tip solvent welded in place. Mileage may vary in terms of removal for purposes of opening the blaster.

The blaster itself uses the same types of internals as the old blaster, from the connecting contacts in the shell halves to the cheap contact switches mounted under the battery tray. The flywheel cage is a somewhat new design, using different motors (not the usual hobby 130s), but it shares the same mounting points and shell slots as the old Tommy 20 cage. Believe me, I checked.

Among other things, this does mean that a few 3d printed cages should fit (with shell trimming) to allow for blaster upgrades. This becomes even more useful thanks to the blaster using modern darts – the Auto Tommy 20 needed large chunks of the shell removed just to accommodate today’s darts.

The Powermech is a much-needed update for the Auto Tommy 20 design, but it’s held back by many of the same design issues. That being said, it does fill the nostalgia role quite well, and should easily take more modern updates, thanks to modern-day 3d design and printing. It’s perfect for smaller kids, but not so much for older ones or adults. But if you’re a Buzz Bee fan, you’ll enjoy it – assuming you can find it in a store.