It’s the end of the year, with holiday sales kicking into high gear and people wanting to know what to buy. However, before we go anywhere near the cliché Top 10 lists or anything like that, I thought I’d peek at a few things we have yet to see. Some things could hit shelves by surprise before Christmas, and others might not appear until the first of the year – or even Toy Fair 2020.

Nerf – Ultra and Other Things?

One of the big questions, of course, is the fate of the Nerf Ultra line. Regardless of the opinions of the NIC, the blaster may end up selling enough units to justify continuing the line. Alternatively, there’s enough resources invested in the line already that we may see a few more units before longevity decisions are made. After all, Megas endured many growing pains upon entry into the market; the Centurion may have been notorious for chopping up darts, but it also sold plenty of units. Giant “sniper rifles” had a certain appeal, after all, and blasters like the Magnus came soon after, helping cement the line’s shelf presence. 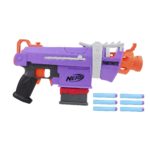 Of course, there will be more Rival and Elite blasters coming out, and if the past is any indication, a few of them will come out as the new year rolls over. Hopefully, however, we’ll be seeing some fun things at Toy Fair, if US Patent Applications are any indication. (In case that link breaks, it’s for application 20190204041, a “HIGH CAPACITY MAGAZINE FOR SPHERICAL PROJECTILES”).

Also, Fortnite is still a thing, and apparently the SMG is releasing at the start of the new year, if the Hasbro Pulse entry counts as “official news”.

Nerf isn’t the only company with fun gems on public file. At some point, we’ll be seeing a blaster with a recoiling barrel (US Patent Application 20190113305). It’s not quite the most exciting development ever, but we have plenty of blasters with lights and sound. In a few cases, we even have Recoil (or Kickback, or whatever Xshot names their tiny single-shot pistol). This just makes this blaster, whatever it happens to be, something with a fun gimmick for the target audience: children. 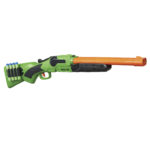 Of course, there are also fun updates to old blasters that we can look forward to! We’ve seen things like the Powermech finally appear stateside, and now we’re getting a Double Shot update, as well. The first pictures popped up as a registered design in the Hong Kong IP Office in October. Then, it appeared in a listing on Walmart’s website. The Adventure Force Double Fire forgoes the shells of the original and has updated range claims (80ft), but still has break action priming and a dual-stage trigger.

Walmart brought out the Double Trouble in December of last year, out of nowhere. I wouldn’t be shocked if they do the same with the Double Fire this year.

Beyond all this, I’m interested to see what new things Buzz Bee shows off at Toy Fair. They’re dropped off the map a bit while things like the Rival space have only heated up.  Will Buzz Bee move into one of the existing ammo ecosystems? Will they bring out more flywheel blasters?

Zuru has made a name for themselves in recent years in budget blasting – this year has been no exception. And I’ve seen Xshot blasters EVERYWHERE. Even though their Walmart offerings are slightly down this year, they still have large swaths of shelving there, at Target, various budget stores (from Burlington to Ross), and more. The dart blaster line hasn’t advanced a lot beyond recolors, although the newer versions of several blasters (Xcess, etc) are seeing wider release. But the Chaos line is making a massive push into Rival, with inexpensive blasters and ammo. Of course, I want to see how they follow up a solid initial offering. but the tinkerer in me really wants to see how they make use of that extra button on the bottom of the Meteor’s magazine! 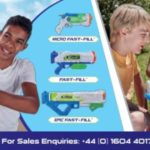 Of course, Zuru’s also been pushing heavily into water warfare, with things from the Bunch O Balloons to this year’s Fast-Fill water blaster (which is a nominee for Outdoor Toy of the Year this time around). They’ll be expanding that particular line of water blasters with the Epic Fast-Fill and Micro Fast-Fill, according to a small ad in November’s Toy World Magazine.

The Dart Zone Pro Mk-I shipped, magazines and darts are up for preorder, and…it’s an okay option for accessories? They’re amazing darts, both in full and half length, but at current prices, it’s not going to beat Worker darts when it comes to people ordering short darts in bulk. Let’s be honest, while I would use both full and half lengths (making the 120 + 120 pack a viable option), the high performance segment Dart Zone is sneaking into is very much one that favors half lengths. Plus, half length adapters that won’t work in existing hobbyist blasters…limits the appeal. If you want to hear more on the subject, as well as the Dart Zone Pro line in general, check Episode 78 of Foamcast Radio.

As for seeing new blasters…that’s the big unknown. The Storm Squad is advertised as being $5 at Dollar General this holiday season, but has yet to arrive. In addition, there are a bunch of trademarked names not publicly attached to any blasters yet. Dart Zone notably didn’t have to show off anything new until well after Toy Fair 2019, due to how well they were selling their blasters. So don’t be surprised if, for a while, we have no news!

In other news, the Liberator (as of this writing) should be back in stock at Walmart.com by December, after selling out a few times already. So they’re generally doing something right with their ball blasters.