Buzz Bee has made a significant push this year on Walmart shelves, with several items under the Adventure Force line. One of them, the Max Morpher, is a unique, folding blaster that’s clearly meant for younger kids. I personally am not a fan of the blaster, but it remains an interesting piece of engineering. It also has great performance and replay value for young children. It’s probably not going to be the enthusiasts’ choice, but for parents? It’s a perfectly fine option. 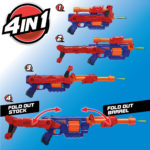 The Max Morpher doesn’t win any awards for looking pretty. Even so, it has a unique style to it, halfway between a mechanical and an alien motif. It’s also unmistakably a toy, with the giant swaths of red, blue, and orange color.

As advertised, it can be used in one of four ways, based on whether the stock and/or barrel are folded up or extended out. In base form, it’s a large revolver with lots of plastic layered over it. Fully extended, it’s a sort of “sniper”.

Priming the blaster with the handle on top. Notice the hinge point on the priming bar.

In any case, the folding, especially that of the barrel section, requires a unique priming solution. The priming bar has a hinge on it that, at rest, lines up exactly with the barrel’s hinge point. This allows the priming handle to be used both in the folded up and fully extended positions.

The priming handle itself is adequate, although it’s more comfortable to use as a pump grip than a top priming handle. The main grip, meanwhile, is on the smaller side, likely leaving adult hands with a pinkie hanging below it. Even so, it’s a much meatier grip than most Buzz Bee handles, making for a comfortable hold.

The stock is fairly long when extended, but is also hard and angular at the back. It’s clearly meant more for play than for serious use; I say this because the strength needed to prime the blaster isn’t much, so the user doesn’t need to press the blaster into their shoulder to use it. Even so, having a corner of the stock dig into my collarbone isn’t a pleasant feeling. It also loosely rotates on its pivot points and shifts from side to side with slight sideways pressure.

As is the current Buzz Bee trend, the shell has plenty of textured and curved shell parts and feels strong.

The blaster comes with ten long distance darts, and indeed has ten barrels to match. The blaster rotates on the prime, but has no priming lock, making it easy to cycle through the barrels while reloading. In addition, you can easily access two barrels on either side, due to curves molded into the shell. These are hard to use, however, when the stock is folded up.

Otherwise, you simple pump and shoot.

With the included darts, I averaged 82fps, which is quite impressive. In addition, the smooth prime allowed for a firing rate of 2.5 darts per second. I didn’t have a single misfire while testing.

The Max Morpher uses a similar setup to other Buzz Bee blasters, with a moving plunger tube. However, the plunger does have less travel to it. It also connects directly to the indexing mechanism that rotates the cylinder.

Two screws hold on the barrel cap, but the main challenge is prying open the press-fit plastic hinges on the stock. Once you’ve done this, however, access is relatively easy.

The orange piece at the front is the release for the fold-up barrel.

The Max Morpher is a unique offering from Buzz Bee, with a different focus on play compared to other blasters. It does have decent performance, but given the mass of plastic dedicated purely to the folding gimmick, I imagine it won’t be a favorite for “serious” Nerfers. Younger ones, however, should enjoy it, and the parents will enjoy the price.