Well, this was a fun time! I managed to make it out to St. Peters, MO for an overnight HvZ game that was well worth it. Mall Mutation Madness Hardcore was a blast the first year. It was even better this time around! Footage and pictures below!

Special thanks to the FRAG Society for putting on this event! 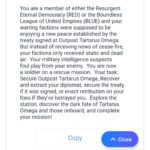 For those interested, you can see a copy of the rules here.

The game started out with some actual plot – Red and Blue were on a space station, trying to figure out what happened to the negotiations over a peace treaty (further plot points and objectives could be uncovered via QR code as the game progressed). Of course, until things could be figured out, Red and Blue were still technically at war. But with zombies around, things would get more complicated.

The HvH portion of the game broke down faster than it did last year – within the first 15 minutes or so, humans organized enough to work out joint teams. If a medic was present, they could heal downed team members of their color; if not, humans of the opposite color would put them down to force a respawn rather than potentially get more zombies. I admittedly got distracted by HvH at one point, then went to “put down” someone when I got nicked with a Rival ball. Humans didn’t get to either of us in time, and the zombies got two new members. 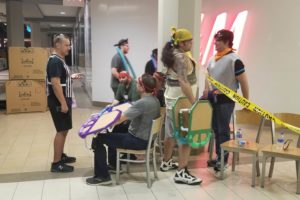 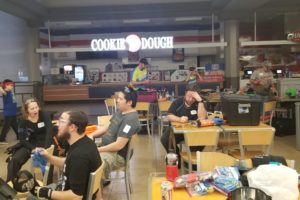 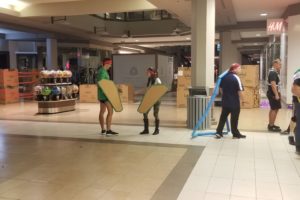 In game, you could collect tokens from stunned players to do things like earn better abilities or blasters (for example, you had to reach level 3 before being able to use a Perses or Nemesis). This curve went up as the game went on. Zombies, however, could turn in just a few human tokens or one kill to get upgrades. These could range from foam claws and shields to PVC safety rings (immune to projectiles while a foot is in place) to engineers that could move cover.

However, there was one fun tool the zombies could unlock – the Fleshmonster. It was a sort of tank (just a cart that could move in any direction) meant for harassing human formations and objectives. The driver is totally immune, but can only move it like they’re in a Flintstones car. Other zombies can latch on to the attached ropes and become immune to darts. However, they can only move as fast as the cart, and can still get taken out with melee. Given the large number of LARP-experienced players in attendance, it didn’t truly become effective until larger numbers of melee users had been taken out by various members of the horde.

The End of the Night

It took quite a while, but the zombies did finally kill all of the humans. At that point, we reset the game, with any zombies that wanted to play human again turning over all upgrades to the remaining zombies. Even with those perks, however, the newly replenished human ranks easily finished the game and stopped all zombie respawns with a few strategic (and fake) explosives, as per the plot.

It was a fun game, with players from all over (I believe the furthest person was from Montana). Assuming I have time and the event is held again, I’ll be sure to make it out for round three next year!