This was a fun thing to find this morning, between Christmas parties. There’s always a slow creep of official, public information when it comes to future blasters. So when a giant, drum-fed, flywheel blaster appears in a Patent Application, it’s worth dedicating a news post. And it’s something I didn’t realize I wanted so much in 2020. 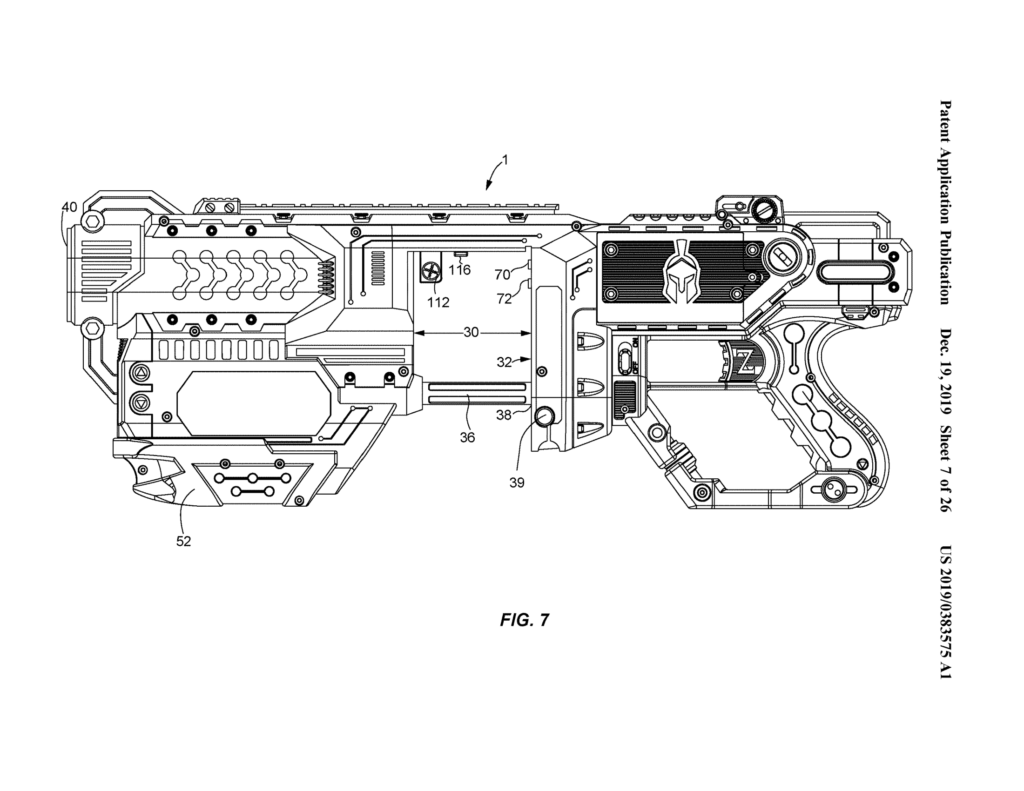 If you prefer just looking at the patent application itself, you can download here. Otherwise, read on!

There is no name attached to the blaster in the patent application, but there is a stylized Greek helmet on either side of the shell…thus why we’re going with the Spartan name. The blaster as pictured is a fun amalgamation of two concepts: the standard semi-auto flywheel setup, and the dual-layer drum (akin to the Turbo Advance, but bigger). Notably, the blaster once again forgoes the rev trigger in favor of a regular on/off switch. And if history is any indication, it’ll once again be powered by six AA batteries.

Based on the individual drum illustrations, we’re looking at a capacity of sixty darts. That is simply an insane capacity for a drum-fed blaster. It’s also a fun step up from previous blasters (twenty for the Double Trouble, and forty-five for the Savage Spin), and really sells “fill as you go” as a viable strategy for blaster battles and Humans v Zombies. As before, the drum is shown to be removable with a button (Part 39) releasing a latch on the mounting rod, so it can move out of the way.

Perhaps just as interesting is the pusher mechanism. The sixty darts sit in staggered, concentric rings, feeding into nonstandard, tall flywheels (at least it appears that way). Instead of staggering which pusher mechanism to extend, the solution is simply to spring-load them both and extend at the same time. One pusher will hit the back of the drum and stop, while the other pushes a dart out. As the drum rotates, they swap roles. 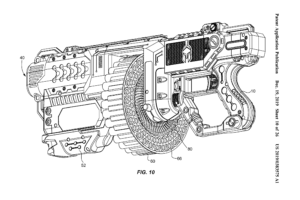 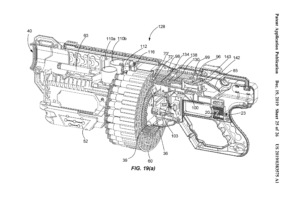 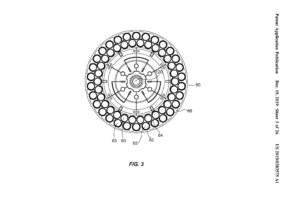 This will be a large blaster – the Xshot Turbo Advance, for comparison, held forty darts and was already quite big. Holding sixty, even in concentric rows, will take up a lot of space. Even so, it’s one I can’t wait to get my hands on, whether it’s sold as a Dart Zone product or put under the Adventure Force brand. We’ll see if a working blaster shows up at Toy Fair!