The early 2020 blasters are arriving just in time for Christmas! I did happen to get one of these sent to me by Hasbro for free (which means I now have two, since I ordered one at Target). Naturally, having an extra one just means I can open it up and do things to it!

The Rival MXX-1200 Charger it Nerf’s newest semi-auto ball blaster, following the Zeus and Hera before it. Instead of using external magazines, however, it opts to feature an internal 12-round magazine. It’s a comfortable and handy blaster, and should be great for anyone playing in indoor settings or who prefers refilling from a pouch.

The Charger, as many have noted online, bears a striking resemblance to the real-life P90, at least in setup. The main handle and trigger sit forward, with a long stock/ammo magazine in the back (and a thumbhole in between). The front of the blaster is solid, with a raised tactical rail sitting above the flywheels. The lower front plastic serves as a basic hand hold for the off hand. The batteries (6 “C” alkalines, not included) sit in the stock, under the magazine. With the battery weight in the back, the blaster feels well balanced and easy to maneuver.

The only real paint decoration on the blaster is the “Rival” on the battery door.

Also of note: the blaster actually comes with enough rounds to fill it twice. 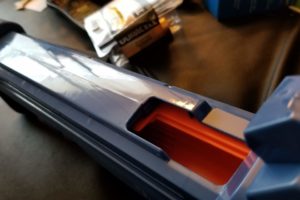 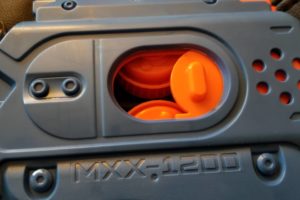 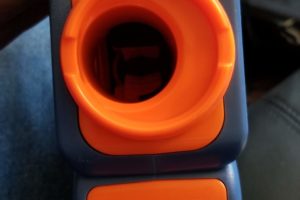 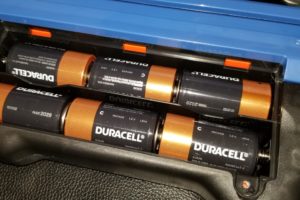 Rival ammo is loaded in the top of the blaster, with a sliding door that pulls back the magazine follower (this aspect is borrowed from the Artemis and Hades). There’s also a jam door located on the right side of the blaster, connected to its own safety switch. Interestingly, the entire system is biased to the the right side of the blaster, down to the barrel (which is clearly offset). This not only leaves room for the motors up front, but also for the rest of the moving parts (like the ball feed mechanism) on the left half of the blaster. It doesn’t affect performance in any way – it’s just an interesting way to set up the blaster. Of course, a manual trigger safety sits below the main trigger.

Overall, the shell is extremely comfortable and easy to use, especially in tight quarters. Admittedly, there’s not much style in making a boxy blaster; even the stock is just “there”, without much thought put into the shape. Even so, the proportions make everything work. The one major area of discomfort is the rev trigger – it’s relatively small, and the plastic surrounding it may make it uncomfortable for larger fingers to hold down.

Performance is what you’d expect from a batter-powered Rival blaster. Both blasters, with fresh batteries, averaged 98fps (compared to the 95fps claim on the box). There is a slight delay needed to fully spool up the motors after each shot for consistent velocity. Even so, it’s easy to shoot three balls per second if you’re more worried about rate of fire.

Interesting how they specifically claimed 95fps when most electric blasters up to this point have claimed 100.

This is a Rival blaster – inevitably, people will rewire them. Myself included! 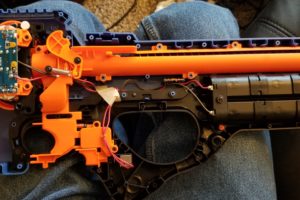 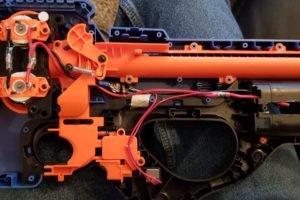 After a rewire, with a 3S Lipo battery and the use of a MOSFET.

The internals are straightforward, like any other semi-auto Nerf blaster. The rev trigger sends power to the flywheels from the battery, and the jam door safety cuts power as needed. After a rewire, my second blaster averaged 126fps. It also became extremely loud from the extra vibrations in the shell. Keep that in mind!

The Rival Charger is essentially an update to the classic Zeus platform. This time, however, it’s a generally comfortable (if plain and boxy) blaster that feeds from an internal magazine you can top off during battle. It’s a no-nonsense blaster fit for indoor arenas and reloading with loose ammo. If that’s your style of play, you’ll especially enjoy the Charger. It’s also at a decent price of $35 to start (the Zeus started at $50, and the Hera at $60).

Admittedly, I’m hesitant to rate this any higher – I still personally see the Dart Zone Velocity (as well as the related and still available Accelerator) as the best semi-auto Rival type blaster. However, time and the next war will determine how that stands, and I’ll edit this review accordingly!