As many of you may have noticed, I try to score blasters relative to their “class”. It’s the reason you could have a rapid-fire Rival blaster and a small, clip-fed pistol with the same score; they fill different roles, and thus should be scored independently of each other. However, there’s really nothing on the market to compare this next product to, so forgive me if I struggle with subjective judgement!

Little Tikes, in an interesting move, has made several “My First Mighty Blasters” products. They launch large soft ammo at low ranges, with the play idea that each shot is a different kind of power. The base model, the Boom Blaster, fires one “Power Pod” at a time with a simple, pull-back launch system. And considering the intended audience…it’s pretty good!

Made For Kids – Little Kids 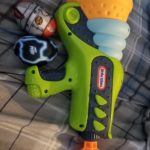 This series of blasters is designed specifically for toddlers, with bright, cartoonish designs, oversized ammo, and no triggers or large amounts of stored energy. In many ways, it’s similar to Hasbro’s Koosh Galaxy line from 2012. Those, of course, used modern versions of the foam ballistic ball. (Coincidentally, you can fire those balls from these blasters for comparable distance, if you have some on hand)

The Boom Blaster (and its brethren) fire colorful, stitched fabric bags filled with stuffing – not quite hackysacks, as they’re soft throughout. These Power Pods, as they’re called, are simply stuffed into the barrel. Once there, the user can hold the blaster in one hand, and operate the pull handle with the other. At the end of travel, an internal catch will release, launching the Power Pod.

There is, in fact, a safety mechanism in the barrel. When ammo of appropriate size is loaded, a tab on the side of the barrel is depressed. That lines up a few parts internally, allowing the user to pull back the launch sled. Yes, sled. The blaster fires my simply impacting the ammo from the rear! No plunger tube or any other mechanism of that sort.

The Boom Blaster comes with three Power Pods: Red Fireball, Missile Launch, and a secret, third one (in my case, Lightning Storm). Use the imagination of the three year old inside you! Also note the punch-out monster target on the back of the package.

Overall the blaster feels solidly built; while the handles are undersized for an adult, that’s not the target audience. For the couple toddlers I had access to in the apartment complex, the blaster was perfectly sized.

The Boom Blaster, as a toddler toy, only claims 12′ ranges, and at an angle, it does in fact make it to 12′ consistently. I didn’t bother trying to chronograph the blaster, for obvious reasons. If you’re fast about it, you can fire off a Power Pod every two seconds. Of course, the average toddler probably won’t do it that fast.

The main issue for toddlers will be getting down aiming and angling for range at the same time. Once they pick that up, however, things improve greatly. I think it’s just a matter of how far along they are on hand-eye coordination. And possibly improving on it.

If you were wondering about the innards of the blaster, here they are. Mainly, they’re a curiosity for us tinkerers. It’s all powered by extension springs, sitting on either side of the “sled”. The pull handle is a separate piece from the sled, and has to connect via an internal catch – one that only engages if the safety in the barrel is pressed down.

Just an interesting thing to look at!

Obviously, for grown-up blaster enthusiasts like myself, the Mighty Blasters are a bit underpowered. They’re also a fun challenge to try and use at an actual Nerf war. For the target audience, however, they’re quite nice. The Boom Blaster is a bright, well-built blaster that’s safe for little kids, and encourages some imagination as they fling their Power Pods about, being superheroes. It’s at least a fun step until they’re ready for harder-hitting toys when they get older.