Author’s note: This blaster was sent to me free of charge for review. Thanks, Prime Time Toys!

The revolver format is a staple of the hobby; the NStrike Maverick is possibly the most iconic blaster ever made. That trend continued with the Elite Strongarm (and to a lesser extent the Disruptor). Mega had it with the Cycloneshock. When it came to Rival, however, the revolver never appeared. Is a revolver the best use of the ammo? Debatable, considering the various magazines and hoppers you can use with Rival-type ammo. Is it still a fun kind of blaster, regardless of ammo type? You bet it is!

Now Dart Zone has started 2020 with that long-missing blaster, in the form of the Apex. And it’s as fun (and good) as you’d expect it to be, for a great price.

The Apex is smaller than you’d expect, even though it’s using wide ammo. It’s comparable in size to smaller pistols on the market, even if it’s wider in a few aspects. Part of this is due to the decision to have only five barrels – I imagine six would make it a bit unwieldy. At least this way, there’s a chance you could holster the blaster.

Also, five shots in a Rival pistol is almost a standard at this point, thanks to the Kronos and its brethren. 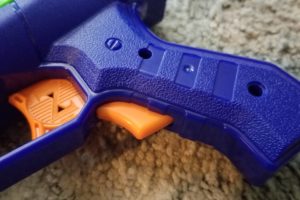 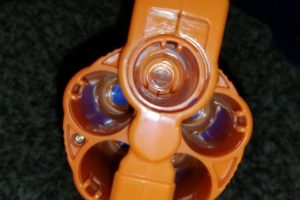 The Apex is sturdy, like you’d expect from a Rival blaster, with thick, textured plastic. It still features the secondary safety trigger, and the grip isn’t perfect, but it’s still really good. Unless you have really big hands, there should be room for all of your fingers. Meanwhile, the priming grip might actually be better than the Kronos; it’s solid, with curves that fit your hand for an easy prime. Since it’s a revolver (with no internal magazine to worry about loading), it’s also a retracting priming grip. No need to push it back. The plunger rod does extend out the back when primed; given the internal setup pictured below, it’s understandable. Still a bit unsightly when we’ve seen self-contained systems like the Cycloneshock, Kronos, and Sentry X2.

Out front, we have a rail of sorts that looks nice, but seems to just be for looks (feel free to prove me wrong). The cylinder is translucent, allowing the user to easily see if a barrel is loaded. The cylinder rotates on the prime; it’s also easy enough to rotate the cylinders by hand for loading them that way. Each barrel has its own ridges for putting spin on the ball.

The cylinder is loaded from the front, so users will need to be sure they push the rounds all the way back. Older users shouldn’t have an issue.

Interestingly enough, the blaster comes with side panels, like the ones you see on the Adventure Force blasters for showing team colors. Humorously, they simply say “TEAM” on them, and come in green. No red or blue panels are included. I don’t know the reasoning for this; perhaps Dollar General didn’t want the extra panels? There is space in the packaging for them to be included, but they aren’t there, and no mention of this is in the instructions. Perhaps Dart Zone could do us a solid and give out a proper 3d model to download and print… 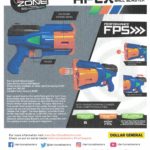 The Apex PR sheet advertises 90fps averages for the blaster. After lots of firing, I ended up with an average of 93fps. That’s perfectly in line with what you’d expect in a Rival blaster. It’s also a welcome improvement over the Sentry X2, their last $10 Rival-type blaster (which was lacking in performance).

Rate of fire seems to max out at two balls per second, although you’ll empty your ammo fast at that rate.

The blaster is as accurate as you’d expect from a ball blaster; shot placement is easy at closer ranges, and acceptable at long range as the ball loses velocity and is more subject to wind and slight ammo variations.

Do note that while the barrels can fit multiple rounds, the Apex won’t “shotgun” rounds effectively in stock form. You simply end up with less range, and not much spread.

The Apex stuffs a wide plunger tube inside, as well as the various parts of the rotation mechanism. You’ll also notice an extra lever above the trigger; this presses the plunger tube forward against the cylinder prior to firing to make a seal.

I have yet to test the Apex with any other springs to see if it can handle additional power (or if anything matches the dimensions of the spring rest inside).

The Apex is the Rival revolver we should have had a long time ago. It’s compact, easy to use, has the performance you want, and is just $10. When it finally shows up at Dollar General later this month, you can’t go wrong by grabbing one off the shelf.