A friend recently pointed me to a sale best buy was doing on the newest Deadpool X-Force Kronos. Being a fan of Deadpool, the rival Kronos, and chimichangas (in that order) I felt obligated to acquire one, especially since it had gone down in price significantly.  This collectors item is everything I wanted, with some neat surprises. 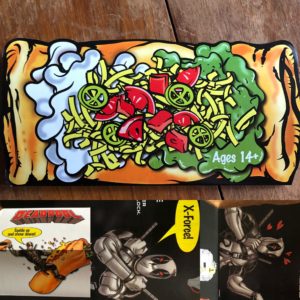 The box art is just as funny and thought out as the first Deadpool collector’s box, with Mexican food themed instruction pamphlet, as well as a lot of Deadpool comic art all around.

The box contains the X-Force themed rival Kronos, painted on both sides.  It includes five (5) rival HIRs that are half red and half black, common with other collectors rival blasters. The novel thing about this particular collectors item is that it contains a foam chimichanga.

The Kronos performs like a Kronos. Need I say more?  The chimichanga is very dense foam, and as such I would not recommend using it as a melee or throw-able weapon in a nerf war, LARP, Humans vs Zombies game, etc.  On hitting my own arm with it, it hurt a lot more than I’d like. Artistically, I wish they had better dispersed the guacamole and sour cream. Half and half with a split down the middle means there isn’t good dispersal of flavor that is essential to proper burrito construction 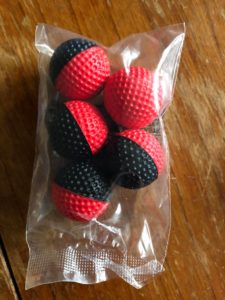 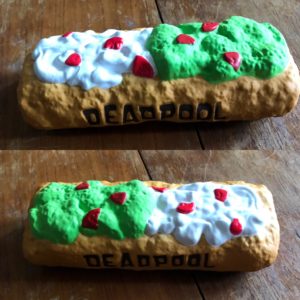 Surprisingly, my blaster came pre-primed. I don’t know if this is common, and I hope it isn’t, as the instructions on the chimichanga pamphlet explicitly state “do not leave the blaster primed”.  All the traditionally orange parts on this blaster (muzzle, trigger, safety switch, internal magazine, sling points) are red rather than orange.  I’m very happy with the greater use of color on this special edition Kronos.

Overall I’m pleased with this blaster and foam snack.  It is a colorful novelty that performs on par with other Rival offerings, with as much Deadpool humor as they could fit on the packaging.  I only wish that the chimichanga were less dense so that I could use it in a war more comfortably.