After the lackluster start that was the Ultra One, Hasbro is expanding the line farther. This time, the Ultra Two is hitting shelves, right before Toy Fair. It still has some design flaws, one of which can be rectified with slight modification. Nevertheless, I find it an improvement in both fun and performance. If you were waiting to jump on the Ultra train, the Two might convince you to give it a try. Might.

When the Ultra One launched, it had a very mixed reception in the Nerf community. The samples I received (as well as bought) performed decently well. However, many were not as lucky, and performance seemed to vary wildly. In addition, the blaster itself didn’t like to spit the darts out straight. It was better accuracy than Elite darts, for sure, but not as good as standard darts (like Adventure Force waffles) that exist on the market already for vastly lower prices. In the end, engineering a new dart line collided with the business side of things (patented darts, etc), and the decisions made didn’t quite meet expectations.

In many ways, the launch of the Ultra One is reminiscent of the launch of the Mega line. After all, the Centurion was a large flagship blaster that sold decently, but had many performance issues, from dart destruction to jamming. It wasn’t until the next year, with blasters like the Magnus, that Mega got to the point of true acceptance.

Does the Ultra Two serve the same function? Somewhat.

The Ultra Two, for $25, gives you a rather hefty revolver. It was going to be large, due to holding six Ultra darts at a time, but it got even larger due to being a flywheel blaster. Yes, this is a semiauto blaster, powered by 6 AA alkaline batteries (they hide under the left “ULTRA” panel.

The aesthetics are rather appealing, in my opinion. We still only have the gold “ULTRA” on one side, but the rest of the motif works. It’s the large, goofy, coloring you’d want in a Nerf blaster. There are two tactical rails (one on top, one on bottom), large iron sights, and a jam door on the left side. 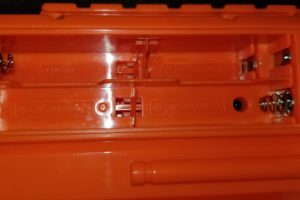 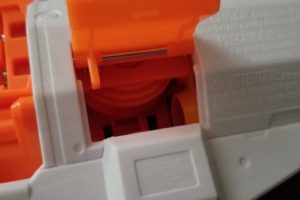 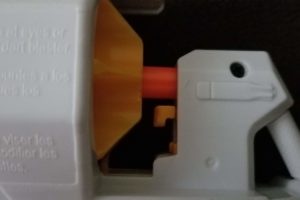 The blaster is fed from the rear, making for an easy-to-feed mechanism. You can also see the “Dart DRM” mechanism behind the cylinder. If it doesn’t stop at the right spot (where the nub on the back of the dart is), the pusher won’t engage. However, it doesn’t work perfectly; a number of factors, from damaged or slightly misformed darts to pushing the dart too far forward, can cause the blaster to not fire. The “Dart DRM” has tight tolerances that sometimes the ammo itself can’t meet.

The blaster feels solid, with a somewhat stiff trigger pull due to the mechanisms inside. The grip, however, is short and thick at the same time. It really could use for some more space at the bottom.

The Ultra Two launches darts better than the Ultra One – testing both of the blasters I bought, I averaged 97fps. In range tests (being generous in firing arc, etc), without wind, darts averaged 108ft in distance, with one dart even passing that fabled 120′ mark that’s advertised so heavily on the box. However, that’s after allowing a few seconds for the motors to spin up again. Rapid firing gives substantially lower fps numbers, but you can fire three darts per second with ease.

As expected with Ultra darts, they don’t fly as straight as other ammo types. Even so, they were quite reasonable, and there were less accuracy issues than with the Ultra One.

I have only had one jam in my time using the blaster, with a few hundred shots. However, other reviewers have seen lots of jams, possibly due to the above-mentioned DRM tolerance issues. It’s not a case of the flywheels getting stuck, just the dart not feeding into them. As a result, until the dart is pushed back (by hand), the cylinder cannot rotate, and the blaster cannot actually fire. It’s something to keep in mind; the modding types can get around it easily, but typical Nerf blaster buyers? Possibly not.

The blaster works as you’d expect for a semiauto blaster, and has a unique flywheel cage. It’ll be easier just to link a video to show the internals, if you’re actually interested!

How highly you rate the Ultra Two is going to heavily depend on your experience. I have had a far better experience than other people, and as such, my rating will be higher. Even so, be aware of the possible issues you could encounter.

The Ultra Two is a fun, oversized revolver that delivers better on the promises of Ultra than the One. At $25, it might be worth a try if you’re dipping your toes in the water. However, be aware that some people have had less than stellar experiences – and that if performance and accuracy are your only concerns, you can still find things that work better. Not to mention the (as of this writing) $0.50 per dart refill cost.