AUTHOR’S NOTE: One blaster was sent for free for reviewing (I bought another to purposefully tear apart). Thanks for the free sample, Hasbro!

This was a hard review to write. On the one hand, Ultra One is a brand new blaster that, combined with its new, proprietary ammo, outperforms other Nerf dart blasters. On the other, Ultra One is a brand new blaster that, even with its new, proprietary ammo, just isn’t quite as useful or inexpensive as other dart blasters. It’s a fun blaster to use, even with some issues that can impair normal use if you’re not careful. If you’re looking for casual use, you’ll probably enjoy it. If you anticipate needing extra ammo or need more consistency, however, you may end up looking elsewhere.

In any case, hang on, because this is going to be long.

Earlier in the week, Nerf had an invitational Nerf Ultra Championship for various social media influencers; footage and results from that will be edited and released in the coming weeks (aka for the holiday season). If anything, it does indicate that Nerf is confident enough in the system to actually have a competition using the blaster and ammo. That evening, they had the launch party for relevant media, including myself, letting everyone try the blasters on the same target courses.

At the same time as all this pageantry, though, we have reminders like this Wall Street Journal article that Hasbro has indeed lost market share to low-cost competitors, especially when it comes to the bulk sale of darts. And that’s ignoring the wild world of the internet, where it’s easy to buy 1000 darts for insanely low prices. In somewhat of a strange response, Hasbro has elected to make custom darts that meet their requirements for accuracy, distance, and safety. It’s a new line, with new darts, with refills coming at $0.50 a dart ($9.99 for 20). Marketing can overcome a lot, naturally, but that still depends on the new line doing something especially noteworthy.

Now that we’re back though, we can get to a more thorough examination of the blaster and darts!

The Ultra One, when not in a snazzy piece of packaging, comes with the blaster, the drum in three pieces, 25 darts, and instructions. It also requires 4 “C” batteries, which sit in a yellow tray at the bottom of the blaster, in front of the main handle.

The gold (and orange, and yellow) color scheme does make for a different statement than the typical NStrike Elite or Rival color schemes; that will largely come down to personal taste.

The blaster itself feels balanced, with most of the plastic having the typical thick Nerf plastic feel. There are a few exceptions: the large black pieces, including the front grip, feel slightly off, in the same manner that a generic water blaster at a discount store would feel. It’s still thick plastic, but it feels off compared to the rest of the blaster. For 99.9% of all people, though, that’s at most a slight annoyance.

The main grip itself is cramped, although smaller hands may find it easier to use. I’m not as particular as other people about grips (*cough* Coop *cough*), but this one did get somewhat uncomfortable after extended use. This was also not helped by the significant amount of force required to pull the trigger. Far more force than you’d expect from firing other semi-auto blasters. More on that once we examine the internals.

Finally, the bulk of the drum cylinder does mean users with smaller arms cannot as effectively shoulder the blaster, as your arm will end up rubbing against the drum. You’ll have to hold that arm at an odd angle.

Of course, the other new thing about Ultra One is the exclusive dart. It’s a brand new dart construction (about 1.4g in weight). with plastic pellets that get heated and molded into shape. A hollow rubber head then gets glued on the front of that. The darts are roughly the same diameter as old school Megas from the 1990s (~5/8″), but are also shorter than current Elite darts (at around 2.70″). They also have molded fins at the back and a small rearward protrusion – one that’s very important, it turns out.

The Ultra One relies on the solid dart to tell whether or not it’s loaded. At the front of the pusher arm is a small, spring loaded tab. Contained within the shell is a small catch that stops the forward movement of the pusher arm. If an Ultra dart is loaded, this spring-loaded tab will disengage the catch, letting the user finish the trigger movement and push the dart into the flywheels. This system requires both tight mechanical tolerances and consistent dart loading – the last of which probably explains my issues at the launch party.

Finally, the darts themselves seem relatively robust – the material can withstand some deformation, but with enough abuse will snap. This becomes more of an issue if you’re actively using lots of darts and inevitably step on them. Even so, I would like to see how well the darts hold up long-term. This will probably involve firing a lot of them in an indoor arena where underfoot abuse is assured.

After unit assembly, insert the 4 “C” batteries into their tray with a screwdriver. Load the 25 darts in the cylinder, taking care to push them all the way in. The cylinder can by rotated freely by hand, for easier loading. After loading the blaster and making sure the jam door is down, simply pull the rev trigger to spin up the flywheel motors. Then pull the trigger to fire your darts.

Both of my Ultra One blasters averaged 92fps, which is quite a bit faster than any other stock Nerf dart blaster. At most, I could fire off two darts per second – the heavy trigger pull limits how fast you can spam your darts.

In addition, the accuracy was far better than other Nerf blasters, although most things are better than blasters firing Elite darts. However, Nerf blasters aren’t the only thing on the market, and that’s where things get interesting.

I elected to test the Ultra One against a reliable blaster I had on hand, the Adventure Force Savage Spin, It, of course, used the relevant Adventure Force darts that we enjoy for their accuracy. Mind you, this testing wasn’t done to scientific standards. but rather for just seeing a general trend.

The first test consisted of just firing at a wall 30 feet away in the basement of my apartment complex, where a handy wall of 8″ x 8″ sits. Holding the blasters as still as possible, I aimed for one of those blocks and noted where the darts actually landed. The Ultra One darts all hit within a small area, up to two blocks away from the target. The Savage Spin, however, hit the exact same block every time, with more darts.

I further tested by putting 1′ radius target roughly 10′ in the air, on a similarly wide tree 60′ away, and waited until there wasn’t any wind. The Ultra One had the distance, with plenty to spare, but only hit the target twice; this distance made initial flight oddities (not exiting the barrel straight) even more apparent. The darts still made a close grouping on the far side of the tree, with a tree-width gap in the middle. However, I was able to hit the target with the Savage Spin with 40 out of 45 darts.

The Ultra One is a fun blaster to use. It has great range, and it’s far more accurate than other Nerf blasters. The only problem it, there are more brands than just Nerf.

I can understand the push for a brand new line of “better blaster”. While still the market leader, Nerf has lost plenty of market share. Alpha Strike exists for this reason, to recapture budget blasting revenue. Even so, it’s hard to truly innovate in this segment of the market, especially when .50cal foam darts are the standard, and other companies can sell superior darts for far cheaper. Even so, Hasbro’s response here confuses me. They’ve created a new line, putting in the R+D for a new dart type, marketing it as the “gold standard” for blasting with power and accuracy…and yet it doesn’t truly bring anything new to the table that doesn’t already exist, EXCEPT a new, proprietary dart that’s more expensive. $50 gets a blaster and 25 darts, with 20 more darts costing $10. I could walk into Walmart, buy two Double Troubles and a 200 pack of Adventure Force waffle darts for $50, and start blasting away with a friend for a better, more accurate, and longer lasting experience, even with dart damage and loss. And it’s already compatible with all my existing darts!

New dart types absolutely demand a new experience. Vortex (and its recent reissue) introduced a cool disc that could float for distance and ricochet off of surfaces. NStrike Elite took an existing concept and added far more distance. Accustrike, while more expensive, at least had considerable improvement on Elite darts. Megas hit that sweet spot of oversized and goofy (and had their own Accustrike version). Rival was a different experience altogether, with easy loading, high capacities, and sometimes insane capabilities.

And that’s just covering Nerf, because other companies have been able to put their own spin on these concepts (where legally allowed) for far lower prices. Sometimes, they don’t succeed (Buzz Bee XL comes to mind). Sometimes, even brand new concepts don’t work, be it due to marketing failures or not getting past gimmicks soon enough to matter (Boomco). But many times, they succeed wildly. In particular, Prime Time Toys (through the Dart Zone brand and their items under the Walmart Adventure Force brand) has been able to push bulk amounts of quality darts, and sell inexpensive blasters with high performance.

Nerf Ultra? It just doesn’t have that appeal, because we already have existing, compatible blasters that can do range and distance and be cheaply refilled with quality darts.

Ultra One is a decent blaster. I’m just not sure what role it’s filling aside from being a new item to heavily market. 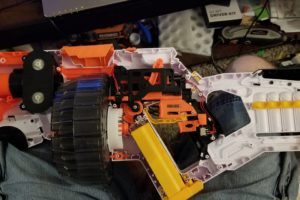 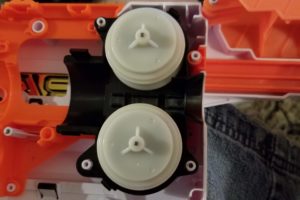 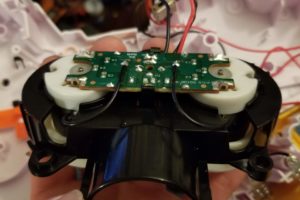 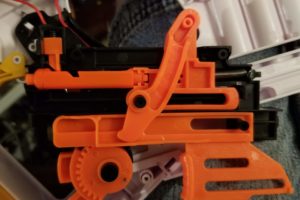 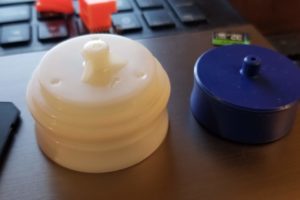 The Ultra One is wired as you’d expect, only operating if the jam door is closed and the cylinder is assembled and present. It has larger, concave flywheels, and larger motors (though not quite as large as Rival). Interestingly, the flywheels are spaced slightly closer than the width of a dart, and (in turn) the cage itself flexes slightly when you push a dart through. The motor board has the usual compliment of small (~2.2Ohm) resistors and other things, and sandwiches itself between the motor terminals. Assume that taking the flywheels off will make them less useful and more likely to slip if reattached to a motor shaft.

Note that nearly every assembly (motor cage, trigger mechanism, etc) is held together by snap assemblies, and not screws.

The trigger mechanism, meanwhile, is interesting. A large torsion spring under the drum advancement gear serves to hold the trigger forward – if this flies apart, you’ll have to line it up again as shown in the picture. Up above, a sear catches the pusher arm, and is what gets disengaged if an Ultra dart is present. Together, all these bits serve to make the trigger pull so heavy compared to other semi-auto blasters.