It’s not often that I give a blaster top ratings. But there’s no way around it: as sold, the Adventure Force Savage Spin is an amazing blaster in every way. Incredible fps for a stock blaster. High rate of fire for a semi-auto blaster. Compact, comfortable. It’s this year’s HvZ starter kit – as long as you’re willing to break the mold and operate without magazines, that is.

The shell itself is sturdy and has the solid plastic feel you’d want in a blaster. The main grip is large with plenty of space for hands of all sizes. The stock extends over 3″ back, allowing comfort for even adult users. The forward grip sits behind the cylinder assembly – which actually turns out to be the point where the blaster is perfectly balanced, even when fully assembled.

There is a decorative rail on top, along with a basic sight.

The cylinder assembly – three 15-round cylinders – inserts into its spot easily, secured by the forward orange tabs. It can also be easily removed for storage, reloading, etc. The forward grip, when pulled back, serves to switch between cylinders (like a Flipfury or Doominator, for example). It’s perhaps my only gripe about the blaster; switching cylinders is a stiff and loud motion. But if that’s my only annoyance, then that’s a good thing.

The blaster itself is fired by first pressing in the rev trigger, then pulling the main trigger. The return of the rev trigger is welcome – the last wave of (Dart Zone produced) Adventure Force blasters like the Double Trouble and Commandfire had on/off switches.

When firing, you do need to pull the trigger the entire way back. The pusher mechanism pushes out the darts, springs back to rest, and THEN the cylinder rotates. You’ll be able to hear the cylinder index to the next barrel if you’ve completed the motion.

Running on just 6 AA batteries, my blaster averaged 98fps, with very little deviation. Depending on what one you buy, yours may very well average 100+fps.

In addition, the rate of fire is as you’d expect for a semi-auto blaster – you fire as fast as you can pull the trigger. In practice, you can easily do four darts per second, with consecutive darts still having decent power behind them. And with 45 shots total, you can keep up the rate of fire as needed. 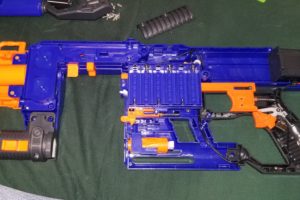 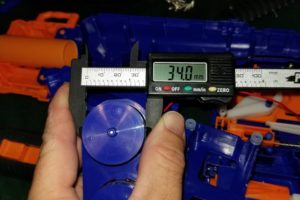 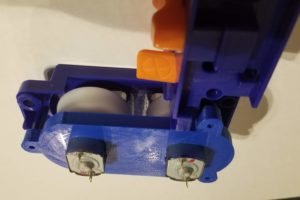 The Savage Spin is a good enough blaster to hold its own in even superstock wars. However, should you want more, there are a few things to consider.

The stock cage is actually different from previous Adventure Force blasters made by Dart Zone. It’s also slightly wider in motor placement than Nerf offerings, although the wheels are also wider in comparison. However, I already designed replacement cages you can print at home for aftermarket motors and wheels.

As of yet, there isn’t an expanded battery door. However, if you prefer the stock extended, that leaves plenty of room for a battery.

The Savage Spin is far better than I expected. It has amazing performance in stock form, needing no work to do well in HvZ settings or stock wars (or even superstock games, if you don’t mind putting in the extra running and tactics). Dart Zone has clearly made a winner. Doesn’t mean I won’t try to squeeze out even more, of course!