Earlier this year, we reviewed the Quadrot. It’s a small, powerful, fun blaster with four shots, for just $10. It also has decent modification potential, if you want more power.

If, however, you just want an inexpensive blaster that works out of the box, then Nerf has done one better. The Alpha Strike Fang may have questionable (but fixable) comfort issues, but it performs exactly the same out of the box at half the price. What more can you want from a stock blaster? 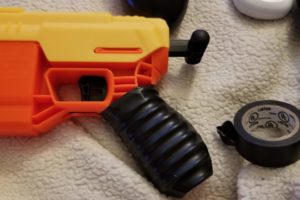 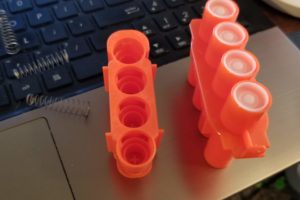 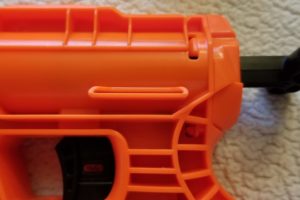 The Fang isn’t anything new – it does everything the same as the Quadrot. In this case, however, Nerf has simplified the blaster as much as possible to make the blaster inexpensive. The shell consists of skeletonized halves welded together. The plunger (and spring) slides in the back and is retained by a clip-on plate. The “smart AR” likewise clips into the front of the blaster. If you’ve ever wanted to examine one for yourself, this is the easiest blaster to do it with.

As with the Cobra, the blaster has a one-piece trigger and catch, and the plunger is made to match the plunger tube diamete; no o-ring is present.

The grip is, of course, uncomfortable. The ribs in the shell dig into your hands after holding for any length of time. The blaster grip and trigger area is still on the smaller side, but can accommodate children’s hands and some adults as well. Yes, wrappin gin tape will fix this…but that’s still extra time and modding on your end, isn’t it?

The blaster gets up to 70fps with the first barrel, and the power drops as you go down the barrel sequence (and the air has to travel farther).

Aside from the annoying grip, the Fang is a quality blaster. A little tape, and it becomes an essential part of any collection (as well as a nice secondary or “holdout” blaster). For $5 (or $10 for the two pack with a few “bottle” targets), you really can’t go wrong.