Dart Zone is on a roll this season. They typically make good blasters for a decent price, but they seem to have outdone themselves this season. They have the semi-auto Savage Spin at Walmart. Meanwhile, at Target, they have the full-auto Destructor, a minigun-style blaster that feeds darts from a hopper. It’s the Commandfire, but made even better. It still has small hangups that come with using a dart hopper, but it’s a blaster worth checking out.

The Destructor looks the part for a “heavy” full-auto blaster. It has a rear main handle (with palm rev trigger and main trigger). There are two front carry handle, depending on how you want to hold the blaster. The dart hopper occupies the top center of the blaster (with a small button for opening). The shell itself is thick, solid, and textured, just like any blaster you’d expect to see from Hasbro. There aren’t any rails or sights on the blaster. Then again, it’s not really made for that.

If you really want to complete the “heavy” look, there are two sling points, at the front and the back of the blaster.

The Destructor runs on 6 AA batteries, sitting in a tray at the back. 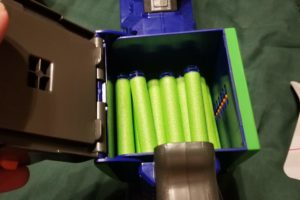 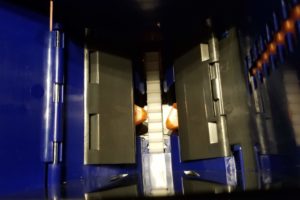 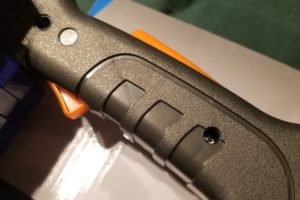 Moving the top button on the hopper allows the user to open it up. After that, the blaster can be loaded with darts – it ships with 30, but there is room for up to 40. Closing the hopper engages the safety, and the user can then operate the blaster. The rev trigger sits under the palm, and the firing trigger under the handle.

If you need to reload individual rounds without opening the hopper (and disabling use of the blaster), there is a small side door for loading the hopper. One dart at a time is much slower, but that’s not the point. The side door makes scavenging for ammo less dangerous, since you can still fire at opponents even while loading on the fly.

The Destructor exceeded most of my expectations. While individual shots would clock above 90fps, sustained rates of fire averaged an impressive 85fps. Even better, the blaster averaged 4.5 darts per second, faster than its predecessor.

However, some issues do present themselves when ammo is low. Dart hoppers with low ammo have a tendency to bounce around the darts, resulting in pauses in fire and the occasional jammed up hopper. A dart can sometimes get stuck in front of the flywheels, pointing down and just out of reach of the firing mechanism. This is easy to fix by opening the hopper, but it does mean you won’t be firing until it is fixed. 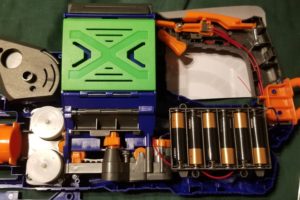 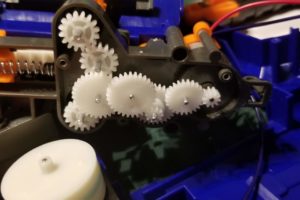 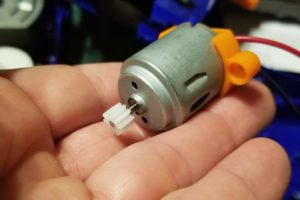 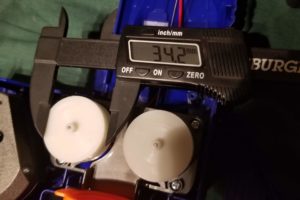 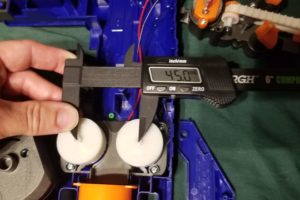 The Destructor shares a similar flywheel cage to the Commandfire and Double Trouble, so this 3d printed cage will fit. Meanwhile, the pusher mechanism is slightly different from the Commandfire, and actually works differently! Well, partly.

In addition to a slightly different motor than before, there is no “pusher” arm feeding darts alongside the conveyor belt. Instead, two rotating arms on either side of the conveyor belt grab darts and push them forward. Ridges on top of those arms also grab and “bounce” the agitation flaps in the hopper. It’s okay that the arms are not in perfect unison (as seen in pictures). In fact, it seems to work better that way (I tested that to slightly worse performance results).

Without the complexity of the pusher arm mechanism, that leaves a LOT of empty space under the battery tray. As such, you won’t have much issue fitting an aftermarket hobby battery into the blaster.

The Destructor takes what made the Commandfire good and makes it better. It still doesn’t solve all the issues with dart hoppers, but the improved rate of fire and ergonomics (as well as loading while armed) are welcome additions. If you want to think outside the magazine, try the Destructor.