Jet Blasters has had a spotty history, admittedly. The original Ceda (Close Engagement Dart Assault) blaster just wasn’t that good, with inconsistent performance and a shell that felt cheap. Katanas were the first major half dart magazine, but an inability to actually supply them in a timely fashion left the door open for other competitors. And previous products have all seen extended development cycles, with purchases often arriving late by months.

As of this spring, however, Jet is trying to rectify things. They’ve released the Ceda S, an upgraded version firing exclusively short darts, and they have it supplied to online distributors. They’ve also sent several samples to various influencers as part of their marketing push (I bought this one, however). In the end, the Ceda S is a major improvement on the original, and it retains important features like easy maintenance and upgrading. It’s worth consideration if you want a relatively inexpensive platform that can be made to do more – and especially if it goes on sale. 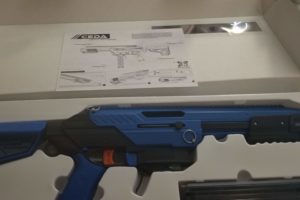 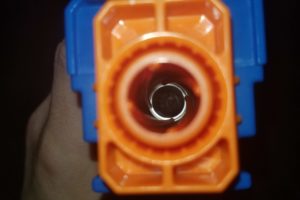 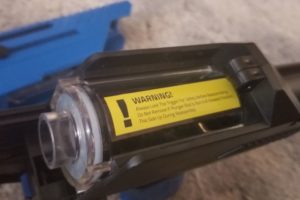 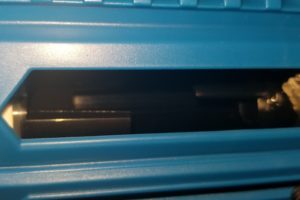 The Ceda S is an update in more ways than one. It has the same form factor, but a different plastic finish and parts that fit together tightly – there’s some flex, but much less than the original. The Ceda S also comes with the Alpha RT kit (better spring, plunger tube, pusher) and the ZRO rifled muzzle already installed. This does mean it can only fire half-length darts, but in the world of high-performance blasters, that’s the norm. And it has a fully sealed breech, to boot.

One thing the Ceda S retains from the original is the pump grip. It’s the worst part of this blaster, making it harder to prime than it should be. It also makes it likely that your hand will slip off, especially when trying to prime stronger springs. Aftermarket grips, especially 3d printed ones, do exist. But those should have been the default, not this grip.

The Ceda S also has the same extendable stock as before…which is serviceable, but not the tightest or most comfortable fit. The blaster will accept any M4 buttstock, however, so you can replace it with a different one. That’s still extra money after the fact, though.

Finally, the blaster comes with one of Jet’s Katana mags, a mag adapter, and 15 round head darts. The darts themselves are nicely made, with great glue and a long stem on the dart head. I may love Dart Zone Pro darts, but these are nicely made and should hold up over time.

The Ceda S claims up to 150fps performance. Technically, that’s true, as some shots with the included darts reached that mark. However, there was also a wide range of speeds, all the way down to 95fps. On average, I was shooting 133fps. Worker darts performed slightly better, as did DZP “bamboo” darts.

Dart trajectory, however, was consistently straight. I admittedly don’t have as much experience with rifled dart barrels as other Nerfers. Even so, whether it’s actually stabilizing the dart or just acting to port excess air, it seems to make a positive impact.

Usually, I try to stay away from modifications when evaluating a blaster; I’ll show the internals and occasionally discuss possibilities, but not use it as an evaluation tool. In this case, however, upgrading internals is a key part of the Ceda S, so it has to be considered.

The Ceda S breaks down after removing two pins, exposing the internals. Removing the thumbscrews in the front assembly allows access to the bolt sled and pusher. Slight shell flexing allows removal of the plunger tube, plunger rod, and spring.

I did not have a replacement spring on hand, but out of interest, I put a small nylon spacer (9/16″OD x 3/8″ID x 1/2″) behind the stock spring to add some precompression. After that, the included darts averaged 150fps, with far less variance. It would seem that the blaster is built to be made better, at the user’s discretion. Of course, higher spring loads may necessitate the purchase of other components, like a metal bolt sled, in order to handle the increased force. Even so, it’s possible to make this blaster shoot well above 200fps, although doing so will require a bit more skill than just dropping pieces into place.

In any case, the beginning of this road is easy, even for those just beginning to modify blasters.

Final Thoughts – Should You Buy?

At first glance, the Ceda S is cheaper than something like the Dart Zone Pro, but in turn doesn’t perform as well or feel quite as good (due mainly to the stock and grip). However, this blaster is built to be upgraded, and it is able to take full advantage of replacement springs and other parts. It may cost more on the tail end than just the initial price, but it’s also possible to get much more performance (though with a much harder prime). A new grip, a new stock (if you prefer), and beefier internals will make one heck of a primary blaster for high-performance wars, if 3d printed blasters like the Caliburn aren’t your thing. I just wish it didn’t start out with consistency and grip issues that require rectification.