The Nerf Rival Roundhouse fills an interesting niche. It’s larger than the Kronos, the gold standard for Rival pistols, and holds three times the ammo. However, it’s also smaller than the Artemis, a long-standing staple of the line from which it borrows inspiration. The Roundhouse is objectively good, but whether you like it will come down to how fast you use up your Rival balls in battle.

The Roundhouse gives serious Maverick vibes, with what appears to be a six chamber revolving cylinder. However, the way it works is even neater.

The Artemis (and later, the Hades) used an internal magazine system that could be reloaded on the fly, after pulling a slide back. They then fed balls into a rotating loading mechanism, emptying one magazine at a time as the user kept firing. 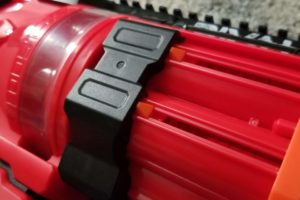 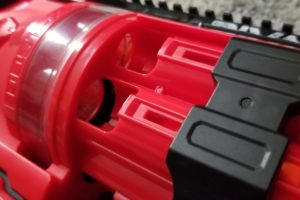 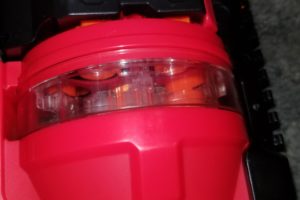 The Roundhouse works the same way. In this case, however, we have five 3-ball magazines, with the final space on top being the barrel. The balls feed backwards into the clear loading mechanism, and are rotated up to the barrel for firing one at a time. Loading is done by moving the black sliding cover forward. Three balls load into each magazine, for a capacity of fifteen, Do note that the third ball in each slot is a tight squeeze. From the user’s perspective, the mechanism rotates clockwise, feeding from the upper right barrel first.

The blaster features two tactical rails, one forward on the barrel (which slides forward for clearing jams), and one on the slide.The usual safety is present, in the form of an ambidextrous lever above the trigger.

The blaster is up to Rival standards in terms of feel and construction – which is to say, very good. The handle is large and comfortable, the slide has enough area to get a good grip, and firing it is as solid as you’d expect from a Kronos-like setup. The hand guard isn’t strictly necessary (and gets in the way of trying to fit a holster, for more serious players), but it does provide a place for your other hand to grip if you need to steady your aim.

In terms of raw numbers, my Roundhouse fires at an average of 90fps, right on par with other smaller Rival blasters. At its fastest (there is no slamfire), I can fire two balls per second.

In actual war usage (splitting between myself and @Nerfers101), I found the Roundhouse to be an effective blaster for steady firing and reloading. However, if you didn’t pay attention and fired all of your ammo, reloading five chambers became tedious and time consuming.

In addition, there were a few hiccups in operation. On a couple occasions, the rotating clear piece didn’t finish its travel, and I had to finish the last fraction of travel be hand to allow a complete cycle. It’s something to look out for – it’s not nearly as debilitating as the Artemis/Hades issue of half rotation, but it’s something to watch for. 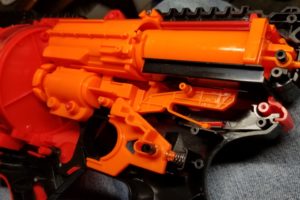 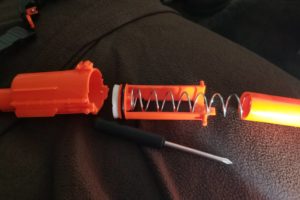 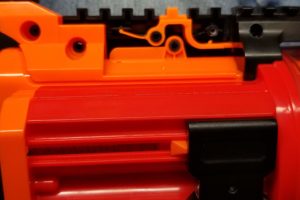 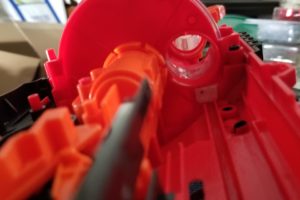 The Roundhouse is similar in operation to a Kronos, but there are important differences. The plunger tube still moves (and triggers the rotation mechanism), but the plunger itself is shaped much differently. It’s no longer a plunger in front of a rod, but rather a plunger with a sled behind it, with the catch surface on the bottom. How the change will play out in terms of reliability (both stock, and with a stronger spring) will remain to be seen.

Note that the orange section of rail is a large latch, which keeps the barrel closed. Pressing down flexes the plastic out of the way, allowing the barrel to open for clearing jams.

If you decide to do anything to the magazines, the orange plate at the front is at least partially solvent-welded in place. Unless you’re doing something crazy, however, there’s no need to actually access it, anyway.

The Roundhouse is a great option for players who love pistols, but need more capacity. It’s a bit bulky, but it’s very effective and worth the $25 asking price. Just be careful with the quirks – unload all that ammo in battle, and you may find yourself taking critical time to reload all those chambers.