The Stryfe is one of the most iconic blasters in modern Nerf. It’s been reskinned numerous times as new blasters (Revoltinator, Fortnite SMG, etc), and it’s been a staple for modders everywhere. It and its various iterations have also slowly gone up in price over the years. Enter the Alpha Strike line, aiming to provide budget blasting to compete with the blasters from other companies. After the initial wave in 2019, 2020 sees the Flyte – the Stryfe of the blaster line. But is it worth the $20 price tag?

Not Quite a Skeleton

The Flyte, as a budget battery-powered blaster, does cut corners. Generally speaking, it’s in places that make sense. The stock is skeletonized for easy molding; it’s short, but good for kids. The grip doubles as a battery tray, which itself is skeletonized on the inside and opens via a clip-in door. Over time, opening and closing the door will end up breaking it (you can see the stress marks in the plastic). However, for the average consumer that only changes the batteries a few times, it’s good enough. And while it’s not special in terms of being a front grip…it’s enough.

In addition, the internal parts have been minimized as much as possible, eliminating metal where possible. You’ll see that at the end of the review.

The handle is decently large and not as uncomfortable as past Alpha Strike blasters; this is one area that needed fixed (even newer units of old blasters have clip-on coverings now). It’s certainly not the best, but it is adequate. The trigger pull is nice, though not as smooth as a Stryfe. The rev trigger, however, isn’t nearly as comfortable, as you need to press it all the way in to hit the switch. It digs into your finger as a result. 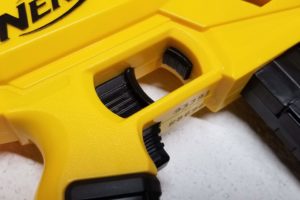 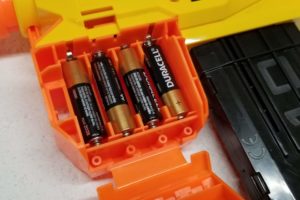 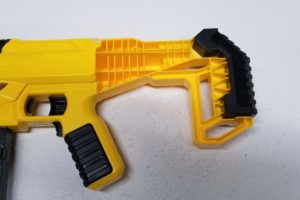 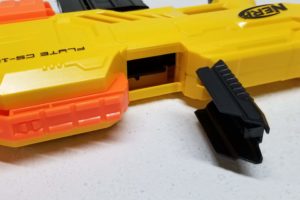 The jam door is still present, but it’s thin and flexible, and doesn’t have a safety switch associated with it. However, the hole is set far enough back from the motors that kids shouldn’t be able to stick fingers in bad places.

The magazine does match the right dimensions and work, though it feels thinner than before (and is also a one-piece design that folds up and snaps together). Putting the magazine in the blaster, however, requires depressing the (small) mag release button; due to the design of the tab in this blaster, it cannot retract by itself when a mag is inserted. It’s another small thing that detracts from the the experience, in the name of saving money.

Ultimately, the blaster itself feels solid to use – for a complex blaster, you can only remove so much, and the areas you normally grip it in feel right. It’s a much better balance between cost and user experience, even if it’s not perfect.

The Flyte performs quite well, averaging 71fps on fresh AA batteries. Of course, that means waiting between shots for the motors to spin up. If you need rate of fire instead of range, it’s easy to put out three darts per second. 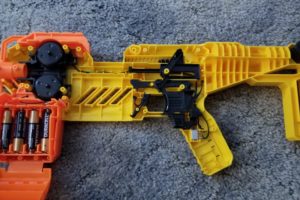 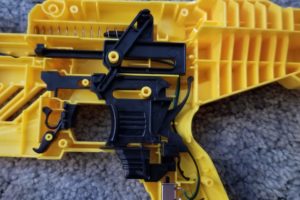 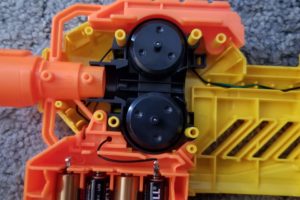 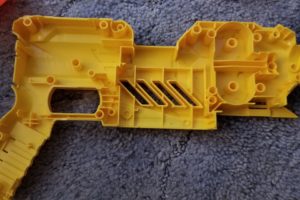 The Flyte comes apart with some careful application of leverage. There are two screws to remove at the front, and then nine clips spread around underneath the outside of the blaster shell.

As you can see, several things have been changed or removed in the name of cost. There’s only one switch in the entire blaster, and only the necessary safeties: the rev trigger lock, and the magazine lock. Only half of a flywheel cage is needed, as the other side is molded into the shell. With the exception of a compression spring for the pusher, all necessary spring tension is supplied by flexing plastic arms.

Here, you can also better see things like the magazine retention tab; as a giant hooked lever, its orientation prevents it from moving out of the way simply by inserting a magazine. Most other blasters like this have the tab as a separate piece.

As of yet, there are no aftermarket cages that can clip into place. However, several Nerfers have already been able to replace the motors and install larger aftermarket flywheels with light plastic removal.

Whether the Flyte suits your fancy depends on several factors. It’s clearly a budget blaster blaster, and several features feel that way. But for the average young kid, it’s quite acceptable. The performance is also on par with other Elite blasters. “Serious” users will find faults with it, and I personally would pay the extra $10 for the comfort and easy operation of a Stryfe. Even so, if you’re just getting into the hobby, it’s not a horrible place to start.