Note: Hasbro sent me a free box of Nerf stuff, as they often do. Thank you very much! Also, obligatory hashtags. #NerfNation #Nerf #freestuff

Earlier this week, a fun box arrived at my local Fedex Drop Location. I did get to open it, but work kept me busy for the most part until now. So, without further ado, cool stuff! 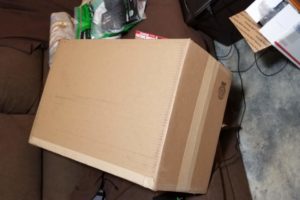 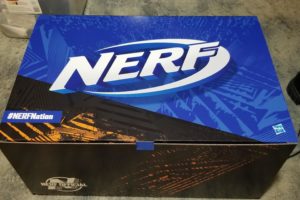 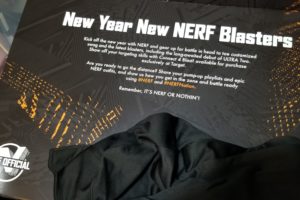 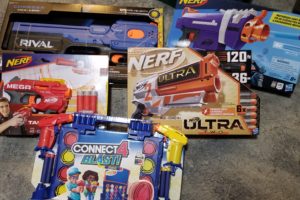 Naturally, due to some items already being on shelves earlier, I have seconds of several blasters – which is no worry. There’s always an HvZ in need of loaners or prizes, for example. The Connect Four, game, however, is new for me – I’ve seen it on shelves and at Toy Fair, but had yet to grab it. Oh gee, it looks as though I’ll have to play a game for fun! 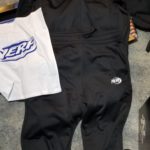 The coolest items, however, weren’t the actual blasters. It was the gear that came with them! Having a towel with the Nerf logo on it is fun – always nice to have something in the travel bag for wiping off sweat, etc. Even better, however, was the tracksuit. Nerf logos on both parts, and in my size. Can’t actually wear it to any games at the moment, due to the various pandemic-related cancellations, but good enough for a jog.

Needless to say, the tracksuit is one thing I’ll definitely be keeping.

The last cool item was a set of Bluetooth earbuds, with a base charger (also featuring the Nerf logo). Also another item I could put to good use! Although I’ve got to actually update the music and such on my phone – I’m one of those guys who isn’t totally up to date with the times, and still sometimes uses CDs in the car. Silly, I know!

A big thanks to Hasbro/Nerf for the free stuff. It’ll all get put to good use, whether by myself or someone else!