Note: I did buy one at the store, but I also recently got one sent to me from Hasbro. Thanks! #freestuff #NerfNation

The Nerf Mega line started with a giant, if flawed, blaster called the Centurion. The Mega Accustrike series did the same, with the Thunderhawk; the giant “sniper” with the sliding barrel was fun, but not that good. However, in true Mega fashion, we’ve followed up with better blasters, in a similar order. For Mega, it was the Magnus and Bigshock. For Mega Accustrike, it was the Bulldog…and now the Talon.

Will you be missing anything if you already have a Bigshock? No. Is it a nice Mega pistol all the same? Yes.

The Talon is a simple blaster, in simple display packaging. For $10, you get a single shot pistol and three Mega Accustrike darts. Operation is simple, too; like the Bigshock before it, it’s an oversized Jolt. Simply pull down the plunger handle to prime, load a dart, then press the trigger to fire.

The Bigshock came with storage for an additional dart. Meanwhile, the Talon comes with two storage slots, one on top and one at the front, below the barrel. This makes reloading extremely easy.

The shell of the blaster has a nice, futuristic look to it, with small details like the translucent yellow plastic adding to the look. It’s built as well as you’d expect from a Nerf blaster. The handle is large (it has to accommodate the plunger tube), but comfortable, and there should be room for all your fingers, barring very large hands. 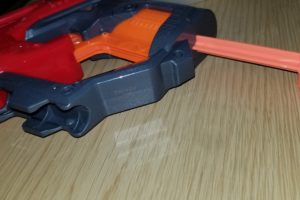 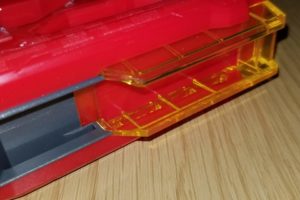 My Talon averaged 58fps during testing – not quite as high as other Mega blasters, but respectable for a small, single-shot pistol. It fires as fast as you can prime and reload it; in my case, that was about one dart every two seconds.

I don’t believe I ever got around to a review of the Thunderhawk, so it’s worth mentioning here: the included Mega Accustrike darts are indeed far more accurate than regular Megas. If only the darts weren’t so expensive in refills!

The Talon is similar, but not quite identical, to the Bigshock after you remove the cover. The plunger cap, as well as the back of the barrel assembly, are snapped into place. It’s possible to release these parts for various upgrades, be it a different spring or the removal of the safety valve (not necessary unless rebarreling for different ammo). Just keep in mind that flexing the tabs will weaken them, and repeated removal (as well as too much force) can break them.

The Talon isn’t reinventing the wheel. But five years after the Bigshock appeared, the Talon is filling the role of “Mega Jolt”. It’s stylish, easy to use, and has acceptable performance, even if if might not be as easy to stuff in a pocket. You’re not missing anything if you already have a Bigshock, but you’ll know what to expect if you do grab one. Besides, who doesn’t have a need to pull out a blaster and fire giant darts?