Buzz Bee Toys made an interesting design decision here. The original Gargantua, which I owned but somehow never reviewed, relied on a small CPS-type pressure chamber. It wasn’t a CPS 2000 by any means, but it had nice strong shots, capacity, and fast pumping. Now, Buzz Bee has the Gargantua X, replacing the CPS and trigger with a Steady Stream mechanism, but keeping the three nozzles. It’s still a decent blaster, considering what’s on the market. I just preferred the old one more.

My Gargantua X came from Meijer, a regional supermarket chain, at $20. A quick internet search didn’t yield any other results in the US, but you may yet find it elsewhere.

Just about everything on the outside is the same as before. The only real changes made were the viewing windows that show the spring-loaded piston chamber. The trigger is still there, but only for show; it doesn’t move. Even the cap is the same, a screw-on cap usually used for pressurized blasters. Buzz Bee simply changed only what they needed to. It’s still the same, boxy, no-nonsense design that cares more about function.

The grip area is the same, which is unfortunate. Larger hands will find it cramped, due to the placement of the hand guard. However, the pump grip is comfortable and slides smoothly, with enough space for the fingers to grip it tightly, even when wet.

The blaster has three nozzles: small stream, large stream, and a four stream spread. Simply turn the orange barrel to select the desired nozzle. It’s easy, and it indexes correctly each time.

Can you shoulder it? Not without holding your dominant arm awkwardly.

The Gargantua X claims ranges of up to 38′. Personally, I could only get 34′, using the smaller stream at an angle, but it’s not out of the realm of possibility. That’s just the issue with trying to range test a blaster like this; holding it steady is itself a challenge. The other streams don’t go quite as far, but they do put out more water in a shorter period of time.

Speaking of nozzles, the Steady Stream effect is clearest with the small stream. You can, with hard pumping, compress the spring to the point where it will continue firing for about two seconds. The other nozzles, however, are larger in area, and let almost all the water out before you can pump again. You really can’t build pressure with those. 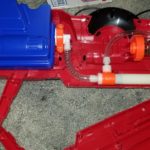 As mentioned, a Steady Stream mechanism sits where a CPS chamber used to be. Beyond that, there’s just a switch in the pump; since there’s no need for an overpressure valve.

The pump volume is still the same, putting out roughly 20mL per stroke. Yeah, it’s strange that I do the capacity and pump in different units. But for some reason, pump volumes tend to line up best with metric units.

The Gargantua X isn’t a bad blaster for $20, it ends up serving a similar function as the Adventure Force Poseidon. It just trades off some capacity for multiple stream options. Kids and parents will enjoy it just fine. Even so, it still feels like a downgrade, knowing the first version had a true CPS chamber. As long as you aren’t suffering from nostalgia issues (is four years long enough to have nostalgia?), you’ll be happy with this blaster, compared to many other things on the market.