Buzz Bee Toys is betting big on their “Steady Stream” blasters this season. No less than four are listed on their website at the moment, and three of those are new models this year. The largest and most widespread, however, is the Adventure Force Poseidon, available only at Walmart. This blaster may not put out a large jet of water, but it does fire for an incredibly long period of time, provided the user continues pumping. It’s a bit large for small kids, but older ones and adults should find it satisfying to use in combat, especially compared to other pump and spray models. 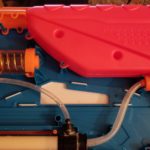 Buzz Bee has had a unique patent on their hands since 2007. It consists of putting a spring-loaded piston behind the blaster nozzle, but not having a trigger valve. When the user pumps water into the piston, it in turn pushes the water out the nozzle. However, the chamber can be fed faster than it can empty, so the user can pump quickly to put more water in the chamber, compressing the spring further and getting a consistent, long range shot. In essence, the chamber acts as a buffer, keeping the shot going between pumps.

As you can see, the mechanism itself is very simple. At most you need two check valves on the pump itself – one for sucking water out of the reservoir, the other for pushing it into the chamber.

The spring behind the piston is quite beefy, a necessity for applying force to water via a large piston face. It’s also strong enough that, even when pumping with reckless abandon, most users won’t fully compress it.

The Rest of the Blaster

The Poseidon is a rather large blaster, around 31″ in length. The blaster design favors a long, narrow reservoir, instead of a more bulbous design. This makes the blaster somewhat unwieldy for smaller users; for the rest of us, though, it’s quite well balanced. The pump grip is very large and easy to use, with smooth movement. The main handle fits larger hands, but the severe angle it slopes at can result in pinching the webbing between your thumb and index finger if you choke up on it. Buzz Bee is doing better on making their handles large enough on their blasters, but there are still things here and there that cause issues.

The reservoir claims to hold 90 fl.oz of water, and it appears to hold exactly that much. Since the reservoir is not pressurized, it’s sealed off with just a snap-on cap.

The nozzle itself is tiny, but is surrounded by a large orange muzzle piece.

Overall, the blaster is quite pleasing to look at. Granted, Buzz Bee’s designs are usually quite simpler than that of Hasbro, but that’s a plus in the realm of water blasters. It’s a seasonal item that just needs to do its job, and if it happens to look nice, it’s a bonus.

The Poseidon’s pump moves roughly 17mL of water per pump from the reservoir to the piston chamber. Compared to the 90 fl.oz of capacity (nearly 2700mL), that means you can pump for a LONG time before running out of water. And with fast pumping, you can compress the spring most of the way before reaching the point where water is exiting as fast as it enters.

Of course, since it’s still a blaster that relies on repeated pumping, accuracy will vary. It will get better with practice, but that will only do so much – it’s not exactly made for shouldering unless you have long arms.

The Adventure Force Poseidon takes the Steady Stream concept and backs it with a large reservoir, letting the user continue soaking for a long time before running dry. It’s a bit large for small children, but everyone else will find it easy to use. And for $20, it’s quite affordable. If you need a new water blaster this season, consider picking this one up.