Not all water blasters do the same thing. Some blasters do a consistent stream over a long distance. Others try to make a spray or mist of water at close range. Then you have the Tsunami Drencher – it elects to dump a giant amount of water (mostly) all at once. However, the design also sacrifices endurance. If you have steady aim (and pull the handle all the way back), then it’s a force to be reckoned with in the backyard. Just be aware of the limitations!

The Tsunami Drencher isn’t new technology; the idea has existed for several years since Buzz Bee Toys first made the Drench Force (review to come later, as it’s still on shelves). That blaster fired in the same manner, but had more than double the capacity. However, it also didn’t see widespread distribution until this year. The initial release only appeared at a few stores, and version 2 was an Adventure Force product…but only at Walmart Canada.

This year, however, Buzz Bee got the nod for a number of new Walmart releases, including the Tsunami Drencher. It’s similar in length and height to the Drench Force, but isn’t as wide. It also, strangely, has a carry handle that seems to just take away valuable real estate from the reservoir. Then again, the blaster also looks far better than the average Buzz Bee soaker – they usually favor a simple but effective approach in the Water Warriors line. I’m going to go out on a limb and say the design of this blaster was tailored somewhat to retailer desires.

The Tsunmi Drencher quite obviously does not operate like other mainstream soakers. With the handle in the back (with a fake trigger), it operates like a giant syringe. However, it’s not quite as simple as that; whereas a Stream Machine or other syringe-type blaster has to be refilled from a pool or other source each time, this blaster pulls water from a reservoir – and has to do so without dumping water out the front until the user wants to fire.

The reservoir holds a little more than the advertised 30 fl.oz.

Looking Under the Hood 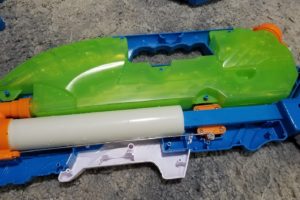 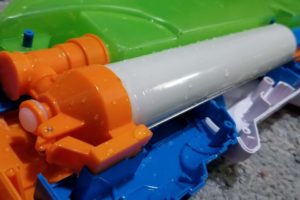 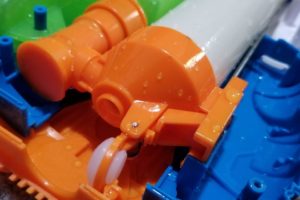 The mechanism that opens/closes the front.

When you open up the blaster, there are two things that really catch the eye. First, the plunger tube is huge, displacing roughly 160mL of water in each shot. Second, the tube has a door in front that opens and closes. It’s hooked to a mechanical linkage, which is moved by protrusions on the plunger rod.

The end result is that, when pulling, the flap presses against the outlet, with the vacuum pulled by the user doing the rest of the work to seal the tube. Only water from the reservoir can get sucked in. At the end of the stroke, the orange mechanism in the back is moved by a tab, opening the flap. Moving the plunger forward quickly launches all that water out of the wide nozzle (if it can be called a nozzle). At the end of the forward stroke, another tab moves the orange mechanism, closing the flap for refilling the plunger tube.

As a result, you have to move the plunger the entire distance every time. Not doing so can result in things like trying to fire when the flap is still being held closed. In that case, you just end up leaking water everywhere instead of firing it. It’s not a bad thing, per se, but it is a limitation in the design you have to be aware of.

As previously stated, the blaster launchers ~160mL with each shot, which empties the reservoir in six shots. The streams are large and laminar to start; however, they inevitably break up due to the shaky movement of a manually-fired blaster. When firing at an angle, I couldn’t quite reach the advertised 51′ distances, although I think it’s in the realm of possibility in practiced hands. The best I could manage was 46′ – still a respectable distance.

Two things should be noted here. Even with perfect operation, the user will still inevitably dribble some water at the end of the shot. It will, of course, drain out, but be aware of it. Also, wet hands will find the forward handle…annoying, due to how smooth it is. You can squeeze the sides of the blaster fairly tight to compensate, but the lack of “grip” on the grip is disappointing. Although its placement is ideal for balancing the weight of the blaster.

The Tsunami Drencher isn’t the perfect soaker. It’s visually pleasing and quite potent, but it also demands specific care in its operation. It’s also on the short end when it comes to endurance. Nevertheless, if you desire to dump large amounts of water quickly on your opponents, it’s a great choice – and won’t be too heavy for younger kids.