Last year, Zuru saw massive success with the original Fast Fill water blaster. I reviewed it then, finding it a solid option amid what is largely a pump-to-shoot market. Inexpensive, easy to use, and the “gimmick” absolutely delivers. This year, Zuru expands the line with blasters like the Epic Fast Fill. It’s larger, has more firing options…and still fills fast, provided your water source is large enough for the blaster. If you liked the first version but wanted a bit more, this blaster fits the bill!

The Epic Fast Fill is 21″ long, making it a bit too large to just think of it as a water pistol. Zuru has responded accordingly, with a new main grip, and the refilling door acting as a stock. They’ve also traded out the previous pump grip for an angled foregrip, making for extremely smooth and easy pumping. Otherwise, it’s essentially the same pattern as last year: translucent reservoir, similar color scheme, and plastic that feels slightly different than other soakers, but is still solid. And it’s comfortable to hold, too.

As before, the door for refilling the blaster opens after pushing a button. And it also fills extremely fast. The reservoir is advertised as holding 1000mL, but that appears to be an underestimation. 1150mL appears to be more like it, but I need to work on getting more exact measurements.

I’d be remiss if I didn’t mention that the Epic now has multiple nozzles. There are four settings: small stream, medium stream, three stream shotgun spray, and a horizontal “mist” setting. If for some reason you want to switch up your options, then now you can! 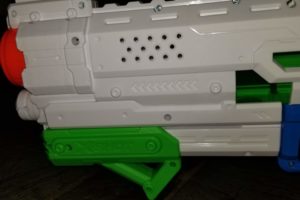 The Epic Fast Fill advertises ranges of 34ft, and that seems quite accurate…at least with the singe stream settings. Extras like the triple spray and the mist obviously don’t go as far. In addition, having a real stock makes the Epic Fast Fill easy to shoulder and aim.

In terms of endurance, you’re firing ~21mL per shot. So you’ll be able to get off 50 shots or so before really having to worry about reloading. Which again, doesn’t take long at all.

The Epic Fast Fill isn’t anything unexpected under the hood. Like its predecessor, a tube runs from the back of the reservoir to the pump, and another runs to the nozzle. Interestingly, it seems like there’s slightly too much tubing in the back, as mine was pinched somewhat. However, this didn’t appear to affect performance, as indicated above in testing.

The vacuum relief valve sits at the very front of the reservoir.

The Epic Fast Fill is modestly larger than the regular model, but it also does so in a comfortable and easy to use/aim package. The features of the former are all maintained, and you get more spray options and capacity (even if some models from other companies hold more). If you manage to find one in stores or online (mine came from Amazon), it’s worth using in your next backyard fight. At least whenever it warms up outside.