Sometimes smaller toys surprise you. I put off reviewing this pack of blasters for a while, opting to review larger things. Given the usual performance of small, “cheap” blasters, (especially tiny trigger-powered ones), I had low expectations. I soon found I was wrong in this case. $15 buys blasters that, while lower in output than other things, can shoot nearly as far. They’re also quite sturdy as easy to use. If your desire is to start small (or possibly to just have a backup), you can’t go wrong with the Aqua Squad.

The Aqua Squad blasters will feel a bit off, if you’re used to the smooth plastic of Super Soakers and Water Warriors products. The plastic may be slightly different, but it’s also decently thick and sturdy, so longevity shouldn’t be an issue.

The larger set, the “Power Pump Water Blasters”, are simple pump-to-shoot soakers; the trigger isn’t functional (although it does move, if you want to pretend). It has an extra-wide “Blitzfill” cap, allowing for easy filling, whether it be through dunking in water or filling from a hose/faucet. It snaps in place, so I would not recommend holding the blaster upside down. The reservoir holds about 600mL, and the pump moves about 10mL each time. 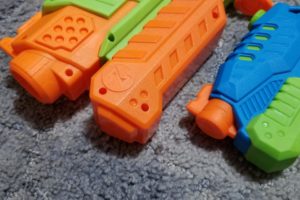 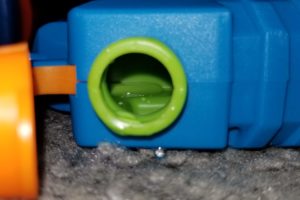 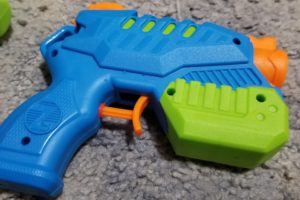 The ranges were actually higher than advertised! The product description lists the large and small blaster ranges as 30′ and 25′, respectively. I managed 33′ and 28′. For the larger blaster, the pumping was smooth, and the stream stayed consistent for the first 20′ before starting to break down. However, when the water gets low, trying to fire at an angle starts drawing air, making for bad shots.

The smaller blaster also worked well, although there’s only so much you can do with 1mL of water. It stayed fairly consistent when pulling as hard as possible, with the last 15′ of travel being in a bunch of droplets. Do keep in mind, however, that ranges will depend heavily on finger strength. Small kids will not get that maximum distance. 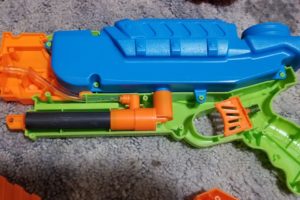 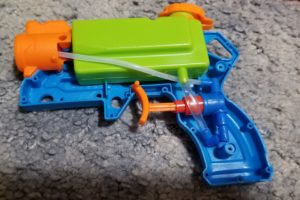 The internals are simple; in both cases, a pump with inlet and outlet valves sucks in water, then sends it out the nozzle. One is just much bigger than the other, and doesn’t have the pump attached to the trigger.

Note the placement of the reservoir outlet in the middle of the unit – this is the reason that angled shots start misting when the water level is low. It’s a bit unfortunate, but given the size of the blaster, it’s perhaps the best they could do with the form factor.

The Aqua Squad 4-Pack is a surprisingly good combo for just $15. The small blasters are great for small kids (and sneak attacks), while the large ones perform well enough that, in a pinch, they could be used in a larger soaker battle. If you need your soakers inexpensive, or flexibility for users of all ages, this blaster pack fits the bill. Just don’t expect to be competing with the REALLY BIG BOYS.