Sometimes I go down rabbit holes and find things. For example, I learned that there was another color scheme for the Powerball in Europe. Following the trail led me to a store, then a catalog, and then to an unexpected surprise: a two-shot Rival Jolt from Dart Zone? 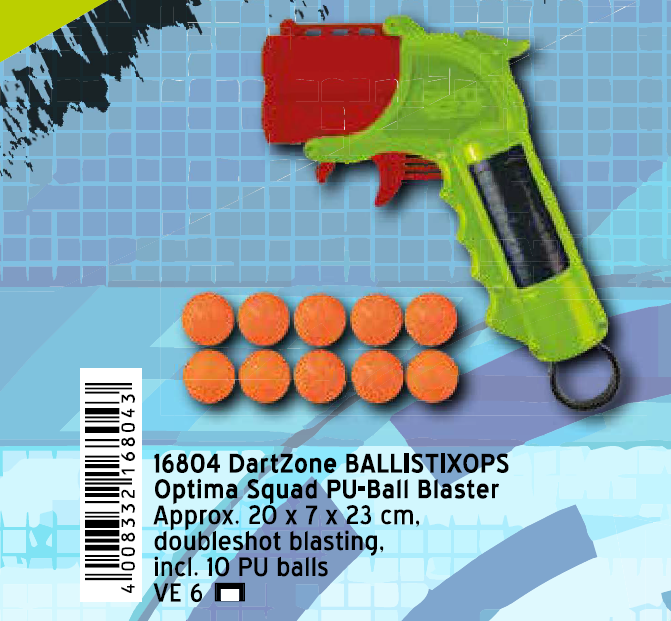 ‘ve been searching the web for any other mention of the Optima Squad, without success. Thanks to a contact, I know that it’s a finished product. But seeing as it’s only available through a distributor for now, that means buying mass quantities for a business. And actual availability at this point has probably been impacted by current world events.

In any case, we can determine a few things from this entry. It primes like a Jolt, and presumably fires two balls, as evidenced by the “doubleshot” description. Whether that means two shots at once, one at a time, or simply having one barrel and one storage slot is up for debate. There’s a hammer molded into the blaster for cosmetic purposes. There’s also a tab in front of the firing trigger – whether this is a safety of some kind is unknown to me, but since it’s a ball blaster, I’d assume it is.

In any case, the styling cues are interesting, and if nothing else I kinda dig the funky green motif of the European Ballistix Ops blasters. Hopefully we’ll be seeing these in the states soon. Given the size of the blaster, I’m not expecting amazing performance. But I’m open to being surprised, both by the ranges and the price tag.