Frantz Foam Works is a small outfit out of Altoona, PA. If you’ve ever played games at Blair County House of Nerf or been to the Penn State HvZ Invitationals, you’ve probably met the people behind it. FFW has also been getting the web store up and running, buying up old stock of motors and flywheels and selling them for cheaper prices (for example, the flywheels are old Hooligan stock). The most notable element, however, is the availability of various blaster kits. The Mk1 Stryfe kit has been reviewed a ton, so in this case, I bought and looked at the Mk2. And as far as kits go, it’s quite nice!

The Battle Rifle Mk2 kit showed up quickly – at least it would have, if I hadn’t insisted on buying it in red. Orange and black are the default, but I payed the extra money to get it in red. Because I’m weird like that. Also, once I find the time to just sit down and work on my Stryfe, I have extra painting to do to complete the look. In any case, doing a custom color didn’t take long to print, and shipping was fast after that.

The Mk2 kit was designed by Uncle Chub, taking the Mk1 as a starting point. Here’s a video, if you care to look at an early iteration of the design!

Picatinny rails get added everywhere, from the top of the blaster to the sides and bottom, so you can place attachments anywhere. There’s also an elongated, flared magazine well (it only takes stick magazines, but that’s okay). The barrel, of course, draws inspiration from the real-steel Jackhammer to complete the look. The final kit comes with just a cap for the stock attachment point, but you’re welcome to also order items like a battery stock or use your own. 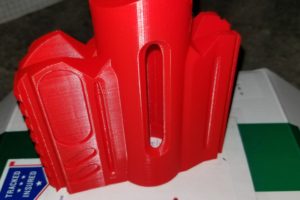 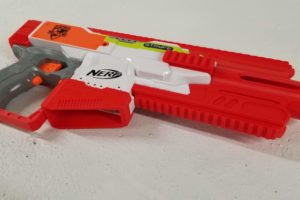 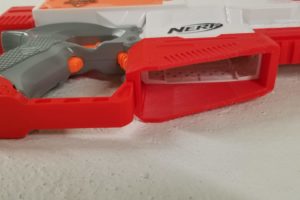 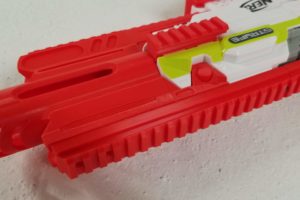 It’s easier to let the pictures speak for themselves. I’m not the best when it comes to 3d printing; I usually just aim for functional, as opposed to cosmetic. However, going off of my basic prints as a base…FFW seriously has the printer(s) dialed in. The layers look great, without noticeable defects. At worst, there were a few tiny flaws in angles or above where supports would have been, and most of those mount onto the blaster and so weren’t noticeable after installation. You know, like normal printing should result in.

Speaking of mounting, the installation was super simple. Many of the pieces have retention bumps on the inside to hold them in place after being pushed on. It takes some force to put in place, but once there, they’ll stay. Even the side rails are a tight fit; those might be the most susceptible to falling out, but that would also require both mounting something and some VERY sudden acceleration. Nothing that a bit of glue couldn’t take care of.

Overall, the Battle Rifle Mk2 kit is a fine piece of printing, with a good feel to it, and the right amount of weight for making the Stryfe a two-handed blaster. Initial assembly is a breeze. The deep, flared magwell makes reloading easy, parts all mount to the Picatinny rails like you’d expect, and it does it all while looking extremely good for a 3d printing job. Congrats to Frantz Foam Works on a nice product; it was worth the purchase to add some tactics and cosmetics to a regular old Stryfe.