Here’s a quick review that I wasn’t expecting to make. I was told by my girlfriend that I was going to have an early birthday party, and that I needed to do decorations. With lots of balloons. Luckily, the regional grocery chain I went to had Zuru’s party goods on clearance. It’s not a normal purchase, but since it was Zuru…I thought I’d at least give it a try. 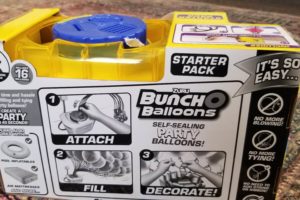 The Bunch O Balloons line started with filling lots of water balloons all at once. The party version was a logical next step that appeared last year, and is still on shelves. In this case, though, you’re using air (or possible helium). That requires a different solution, in the form of the Party Pump. It plugs into a standard wall outlet, can inflate multiple balloons at once, and comes with extra fittings for different applications. If helium is your desire (or you already have an air compressor), then the balloon packs come with fittings that can be used. It’s a nice nod to practical use; you can still make use of the balloon packs even if you don’t have their specific pump.

Using the party pump, you can inflate 8, 16, or 40 balloons at once. Timing for 40 seconds, as described on the package, seemed to work well – I got large balloons on all three settings. It would seem inflating smaller numbers just results in restrictions on compressor output, so inflating more makes it more efficient. At least that’s my experience.

At least as far as time savings is concerned, this beats blowing up balloons by a wide margin, even if it’s more expensive.

OH NO! BEING FORCED TO CELEBRATE MY BIRTHDAY!!!

The balloons themselves are manufactured and glued together – they are in groups of eight, with the inflating stems all stuck together (and a clip around them). After inflation, the balloons automatically seal off, and you can just separate the balloons as needed. Or you can keep them all together; it’s your call. Although if you do, it’s possible to inflate them a little more days later, if needed. After all, balloons eventually deflate. It’s an interesting and effective system – one that also advertises itself as being recyclable to boot.

The Bunch o Balloons line is a fun way to do mass quantities. Are they more expensive than regular balloons at MSRP? Quite a bit, actually. It’s going to be a bit of a turnoff if you don’t use balloons often, or only in small quantities. If you use a lot, however, or find the balloon packs and pump on sale, it’s worth a bite. $10 for 24 balloons was too much for my tastes, but $2.50 for 24 was enough to justify clearing the shelf. Just means I can fill friends’ cars with balloons on their birthdays and other fun shenanigans!