Sometimes, you find little bits of blaster history on the internet. Or rather, someone directs you to them. Credit to Nerfmafia, one of the admins at Cincinnati Area Nerf Enthusiasts and member of the History of Nerf Modding Discord, found these on Ebay…in Greece. Being the patient person I am, I bought them anyway, knowing that shipping would be delayed by current world conditions. They’re here now, so let’s take a peek!

Two Score and One Year Ago

For those unfamiliar with basic blaster company history, Nerf was originally made by Parker Brothers, and consisted of safe foam sports products, starting with the original ball and continuing with vehicles and fun foam figurines. Parker Brothers was a subsidiary of General Mills (yes, the cereal guys). General Mills also owned Kenner Products, another toy company, which made everything from Ghostbusters Toys to the original Star Wars action figures. While the subsidiaries would merge in 1985 and be bought by Tonka, Nerf would continue to be made under the Parker Brothers name until 1991, when Hasbro bought Tonka and moved the Nerf division to Kennar. 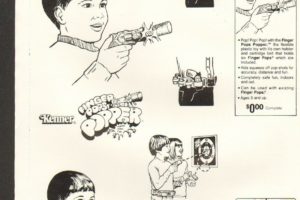 Kenner, it turns out, made some “popper” toys well before taking over Nerf. In 1979, we had the Finger Pops; in reality, they were just cut sections of foam you squeezed and “popped” up to ten feet away. Also the same year, we had the release of Finger Pop Poppers. As you may have guessed, these fired the Finger Pops, but from a toy squeeze blaster. Here’s the commercial from a 1981 ad campaign!

One the one hand, it all looks Greek to me! Since these packages in particular were made for an overseas market, only the logos are in English. Even so, you don’t have to know Greek to figure out the packaging. Both are in a lot better condition than I expected for their age.

The toys come with a plastic belt/holster, a squeeze blaster, and six rounds of ammo. The belt is actually made to slide over a real belt, and to be worn around the waist.

Meanwhile, the ammo is just cut blanks of foam, 1″ in diameter. If it looks familiar to any of you, it’s because it’s just foam backer rod. It’s funny how ideas can appear, disappear, then reappear years later in a different context. I refer, of course, to the way we all used to make homemade Nerf darts, using foam backer rod for the body and various materials for the heads. 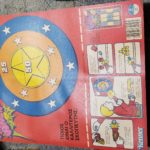 The back of the display package features a cutout paper target, along with instructions for using the toy and different ideas for game types, like knocking over plastic cups. It also advertises the refill packs of Finger Pops that you can use as ammo. Finally, we see both the Kenner logo and a General Mills proof of purchase seal.

I won’t be keeping both packages, as one has already been claimed and paid for by a fellow Nerfer. But I’m fairly certain this is one of the few things I’ll elect to keep in package. I hate not using toys for their intended purpose (as toys), but seeing how old this is, that’s probably the best course of action.