Four years ago, I got a package from Prime Time Toys, with sample products of the various blasters coming out that year. Among that group was the Blitzfire, a small but potent blaster featured in a Target-exclusive two-pack. Now, in what amounts to a stealth refresh, new versions of this blaster have appeared on Target shelves. The performance is similar (read: great), but I’m really digging the new look!

The Blitzfire, in its original form, was fairly simple in shape and construction. Now, while the core parts remain the same, the body has a far more creative touch. Detailed molding, plates on the handle (a target for modders to personalize if there ever was one), prominent rails (even if there are no attachments to go with them). This is exactly the sort of thing you expect to see in a major blaster brand that’s trying to match the quality of Nerf while beating the price. The plastic feels right, the handle is large and comfortable…

Operation is the same as before: you pull back on the slide to prime (it auto-retracts), then pull the trigger to rotate the cylinder, then fire. Thankfully, the new slide is larger and easier to grip in that regard. The top, however, is pretty smooth, so damp hands and not paying attention could lead to your hand slipping off. Darts can be loaded into two of the barrels at any one time, one on each side of the blaster. 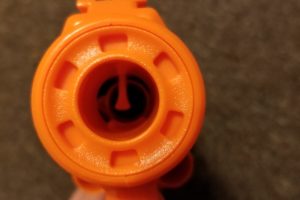 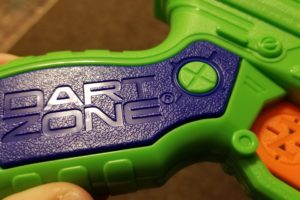 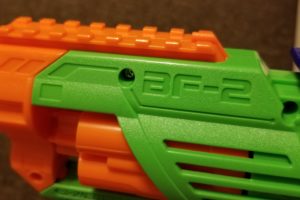 Do note that the cylinder rotation is independent of the blaster firing. So pulling the trigger without priming will still rotate the cylinder, making reloading easier.

The Blitzfire X2 performed well in testing, averaging 78fps with the included darts (Sureshot/Waffle darts take care of themselves as far as accuracy is concerned). There is no slamfire, but it’s still easy to fire off two darts per second.

The Blitzfire X2 is essentially identical inside to the previous version. If you ignore the fact that it’s a dart blaster…it’s just a double action revolver. Pulling the trigger ratchets the cylinder to the next barrel, then engages the sear. I do find it interesting how much Dart Zone likes to use this kind of mechanism, as opposed to the usual indexing mechanisms you find on Nerf blasters.

The Blitzfire X2 performs roughly the same as its direct predecessor. However, it looks far better, in my opinion, and it’s also very comfortable to hold and use. And, even with the updates, it’s still the same inexpensive price. If you haven’t already bought the original, buy the refreshed version. Then again, you might want to buy these even if you have to old version!