*Author’s note: I did receive a Spectrum as a free sample from Prime Time Toys; thanks for letting me get an early peek!

The Spectrum, an online-only blaster from Walmart, costs $25 (plus batteries). It’s not only Dart Zone’s interpretation of the Stryfe platform, it’s also their first “regular” product outside the Pro series to use Nerf-compatible magazines. It’s a shame that it’s only online (for now), because it’s one of the best blasters that Dart Zone has made, and one that seriously outshines the current Nerf offering.

One of the most interesting developments for Dart Zone blasters this year is the appearance of a standardized rail system across platforms. The Spectrum not only has rails, but also attachments that fit onto them. Nerf attachments aren’t technically compatible, but they do have a loose fit. Meanwhile, the extending stock can be swapped with that from the Villainator! The fact that multiple blasters in the line can share parts is welcome change.

The attachments, of course, are of more value to kid’s play than enthusiasts. Even so, the fake scope looks nice, the pivoting foregrip is adequate (the indexing is a bit loose), and the stock works. Taller individuals might find the stock a bit short, if for some reason they absolutely insist on using it. Of course, there’s always the option of just removing the stock and using the Spectrum as a pistol! The blaster also feels fine without the foregrip in place, and just putting your off hand in the front.

The trigger pull feels smooth, helped by the absence of internal, mechanical locks. The rather large rev trigger is extremely easy to use. The grip fits the hand well and is comfortable to hold for extended periods of time.

The blaster feels sturdy in construction, on par with Hasbro offerings, and is nicely molded (as other non-Hasbro blaster brands tend to do in their designs).

The Spectrum takes 6 AA batteries through a door on the left side. Insert the mag and fire darts like you would with any other semi-auto blaster with a rev trigger.

Notably, Dart Zone made sure the Spectrum could take Nerf magazines (as well as other brands). Magazines with a bulge in the back (chiefly, Nerf 18rd magazines), however, have a small hiccup. They’re compatible, but the release lever hits against the magazine, requiring more finesse to release the magazine.

There is a dart jam door on the left side of the blaster, and it has a safety switch attached to it.

My sample is averaging 98fps, in line with many previous Dart Zone flywheel blasters. It’s also easy to spam four darts per second, even if there is some reduced velocity in later shots.

As usual, the included waffle darts are very accurate; having had a recent chance to tag a few other people with darts, it was very easy to hit the desired targets, even at long range. It was enough to start competing with modded blasters (even if I had to move more than they did).

While the Spectrum is already outstanding as a stock blaster, the internals are worth looking at, in case you still want to do more with it. 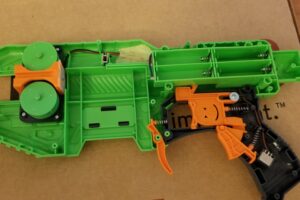 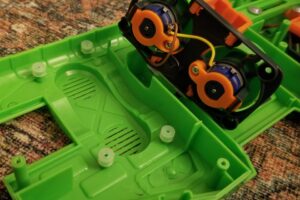 Most importantly, the flywheel cage is (aside from slight variation between blasters) the same as that for the Double Trouble, Destructor, and Commandfire. As such, you can print these cages for free (or get a friend to make them). You will need the rubber cushions from the original flywheel cage, though.

I’m also working on a few free things you can download, although they haven’t been tested yet; my 3d printer still needs to make the trip to the new house. Until then, feel free to try the name plates, reshaped mag release, and picatinny grip attachment!

Compared to the Elite 2.0 Pheonix, the Spectrum stands out as the far superior blaster, especially for stock battles and Humans v Zombies. You simply have better ranges at your disposal, and Dart Zone continues to make blasters that are capable of outclassing the Nerf equivalent. It’s only available online for now, but it’s well worth the $25. The Adventure Force Rebel Mech is great and on store shelves for the same price, but if you prefer the classic blaster layout and feel, the Spectrum has the edge.