Author’s note: I got this blaster as a free sample for review. Big thanks to Velocity Outdoor!

The Ceda blaster platform has had an…interesting life cycle. The original was a neat concept, but nothing to truly write home about. The Ceda S represented a solid step towards being a platform for high-performance blasting, and its inclusion on Evike (and regular sales) helped push the platform farther.

Now, Velocity Outdoor (which encompasses Crosman, Gameface, and several other brands) is licensing the Ceda S in the form of the Gameface Prime. Combined with a wide distribution network and actual retail store presence, it looks like we now have the definitive version. The Gameface Prime is what the Ceda S should have been all along, and it’s a good jump-in product for a company looking to enter the competitive foam flinging space.

The Gameface Prime shares the same overall format as the Ceda S; if you’re expecting a radical difference in performance, you’re going to be disappointed. The front end, however, looks quite a bit different.

Noticeably, the old (and inferior) priming handle is gone, and a vertical foregrip is included in its place. It attaches to a small length of Picatinny rail underneath, so if you have a different preference, you can use that grip.

On the barrel shroud, meanwhile, there are various M-LOK attachment points for all your tactical needs. Want a flashlight or some other aid, but don’t want it on the top Picatinny rail? Now you have a place to mount it! The barrel itself (and attached SCAR) screw in through the middle.

As before, you can simply remove the two pins to separate the blaster into front and back, exposing the internals. As with the original Ceda, you can swap out the springs and other components for more power if you so choose. At a certain level of power, of course, you’ll need things like metal boltsleds and longer barrels, but such things are available online.

The Gameface Prime also uses Katana short dart magazines, and ships with one magazine and 15 Quik Darts. The included stock is minimal, but stiff. Overall, the blaster is quite comfortable.

In Store: The Next Major Development 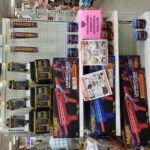 While the Gameface Prime has, in some ways, been overshadowed by the release of the Nexus Pro, it’s also hitting shelves – just in other venues. Velocity Outdoor, being the conglomerate they are, has wide distribution to various sports, outdoor, and farm supply stores. For example, here in the Midwest, Rural King already has displays up with blasters, eye pro, 100-dart packs ($17), and new magazines ($15). It’s a bit more than what many Nerfers would pay for darts and magazines. But there’s something to be said for having it on shelves, in places that normally carry airsoft blasters and airguns. Expanding the audience is a good thing! And the convenience is of obvious benefit. Whether it’s enough for Katana magazines and Quik Darts to get a larger chunk of the market, though, is up for debate.

Expect to see these in other stores as well, like Scheels. And, of course, the main web site.

With the included darts, I averaged 135fps, above the 130fps claims. In this case, Velocity Outdoor favored a more conservative number than Jet Blasters’ “Up to 150fps” that only occasionally came true. More importantly, the improved grip allows for faster firing of the blaster. One dart per second is quite easy to accomplish.

Out of interest, I tested the blaster with the readily available Adventure Force short darts, and averaged 152fps!

In any case, the blaster is highly accurate with all of the various short darts I had on hand, with a target on my back fence being easy to consistently hit. I’ll have to do a more thorough comparison of these darts (and this blaster) with further modding and time.

The Gameface Prime is the best version of the Ceda S. It’s a bit more expensive than the other readily-available “Pro” blaster, but it also offers more potential when it comes to modifications, due to the platform. After using it in a local war, I’m more than comfortable buying one for myself to continue experimentation. In the meantime, though, it’s worth consideration if you want a more modular blaster for your high-velocity foam flinging.

I’m excited to see what else comes from Velocity Outdoor in the future. Provided sales translate, I’d expect to see more dart blasters over the next few years!