Author’s note: I got this blaster as a free review sample from Dart Zone. Thanks, guys!

One of Dart Zone’s most interesting innovations in foam blasting is the dart hopper. Seen first on the Commandfire and Destructor, it allows large capacities without the use of magazines or bulky cylinders. It’s also undergone some refinement over the past two years. Now, it’s feeding a manual, pump-action blaster, the Sportsman. In spite of the funky appearance, it makes for an effective blaster, especially if you scavenge darts. It’s not quite as high on the “to buy” list as other Adventure Force blasters, but it’s still worth the $20 at Walmart.com!

Of all the recent blaster models, the Sportsman, at least in terms of styling, seems to borrow the most from real-life counterparts. Carry handle here, gas tube there, large forward sights, mold details…it’s quite an amalgam. Granted, the giant orange muzzle and dart hopper make it clear this isn’t a real weapon. But the mixture of everything helps give it a modern, perhaps slightly sci-fi vibe. I don’t know who actually does the design work for Dart Zone, but they’re doing a superb job!

The main handle and trigger pull are quite comfortable, while the pump handle is serviceable. Thanks to the large protrusion in front, it’s easy to wrap your thumb around it to get a grip. That being said, if you like holding your blasters up to eye level for aiming, it may not be your favorite. The design (and dart hopper) do favor holding the blaster lower.

The dart hopper functions largely as it did in the Destructor; the button on top allows the lid to flip open to load darts in the top. A damper presses down on the darts when the lid is closed, and internal flaps jostle the darts into place for the breech at the bottom.

As with the Destructor, a small door on the side of the hopper allows for simple dart loading – perfect for loading on the fly while still being able to fire normally.

The Sportsman averaged 79fps with the included waffle tip darts in my testing. The rate of fire is somewhat slower than a blaster like the Villainator; practically speaking, you’re getting two darts per second. Faster than that risks squishing darts in the breech and getting a jam. Thankfully, there’s no lock keeping you from reopening the breech after priming it, if a jam happens.

The dart hopper, by its nature, isn’t quite as reliable as a magazine. Occasionally (and usually when ammo is low), I misfired, with no dart loading. Over the several hundred rounds fired, however, misfires and jams only happened about six times. It’s something to watch for; perhaps a backup pistol for games like Humans v. Zombies would be advisable.

Do note the “rough” prime. However, there’s a reason for that! 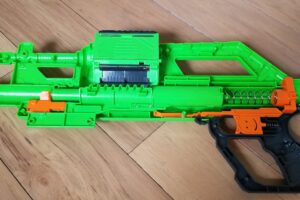 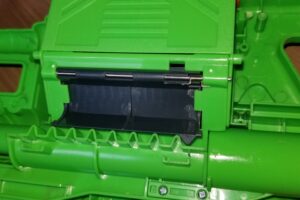 The Sportsman has a dart hopper, and the dart hopper needs the flaps at the bottom to move in order to agitate the darts. Since this is a manually powered blaster, that means you have to power the agitation!

The “rough” prime is merely the interaction of the flaps and the ridges in the plastic of the priming assembly.

Beyond the unique hopper and breech system, the rest of the blaster is fairly standard in setup.

The Adventure Force Sportsman is a fun diversion for Dart Zone. It’s not perfect, but it largely gets the job done in style. The improvements we’ve seen in the dart hopper system (and its adaptation to a manual blaster) are also noteworthy. For $20. it’s worth a try if you want to think outside the magazine!